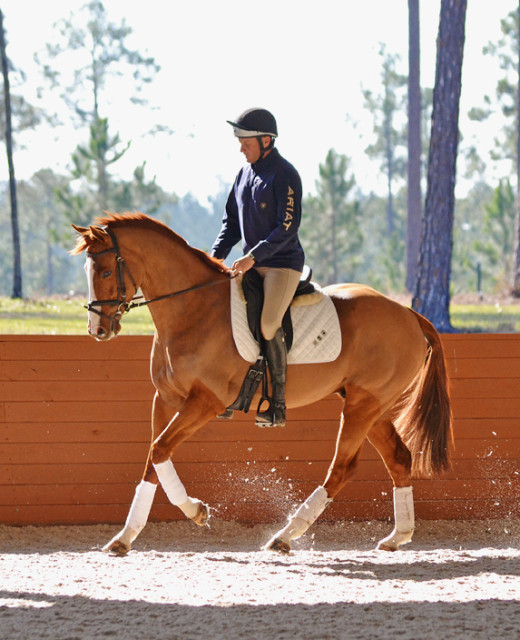 The chestnut gelding with the white face and white eye caught a few eyes at Paradise Farm in Aiken last weekend. With the always recognizable Boyd Martin in the irons, a few onlookers thought perhaps they were looking at the old campaigner, Neville Bardos, out for a spin.

While the resemblance is uncanny, it’s a different talented chestnut that Boyd piloted to a win in the Open Training division that weekend — a six year old Thoroughbred by the name of Santos.

Initially intended to race, Santos ended up as a liquidated asset when the original owners went bankrupt, and he was eventually re-started as a 3-year-old with Jil Walton. At the end of his 3-year-old year, Santos transitioned to Erin Kellerhouse in Temecula, California, where she competed him in some Young Event Horse classes before making his Novice debut in 2013. “He’s always been a pleasure to ride, and he has one of the best canters I’ve ever sat on,” Erin said.

Santos is sired by Athlete, who carries the famed Saint Ballado in his line. Santos carries excellent movement and an exuberance for jumping, making him an athletic prospect which was evident in his consecutive top three finishes in the Young Event Horse divisions and a third place finish at the 4-year-old Championships in 2013.

Erin competed the gelding through Training level, completed the 2014 AECs and picking up a sixth place in the 6-year-old YEH class at Galway in October. It was at Galway that Boyd, in town to compete Trading Aces, decided to take a spin on the horse, who was offered for sale.

“Caitlin (Silliman) had found out he was for sale, and had flown out to try him,” Boyd said. “She brought the videos back to me, and while he maybe wasn’t quite suited to Caitlin, I was intrigued. I liked the look of the horse, with his movement and jump. So when I went out to Galway, I inquired whether he was still for sale, and watched Erin ride him.”

When Boyd first tried Santos, the horse quickly ticked all of the boxes, although he checked in a bit on the small side. “I was a bit nervous about the size,” Boyd recalled. “He measures 16 hands with quite big shoes on, but he rides big, if you know what I mean. He’s got a big step and there’s a lot of horse out in front of you. I don’t look too ridiculous on him — I’ve galloped a 15.2 horse around a four-star, so it’s just about having the right balance and the right step.”

“I’m a sucker for a really classy looking Thoroughbred, and unlike a lot of Thoroughbreds out there, he moves like a dressage horse. On top of that, he looked like a bit of a handful on cross country, which may have turned a few others off but it inspired me. Size is something I’m willing to overlook if every other box is ticked.”

Boyd decided to move forward with the purchase, and his longtime supporters Gloria Callen and Ron and Densey Juvonen stepped up to support the new prospect. “I’m so fortunate to have a core group of owners who support me and back me, even with a younger horse,” Boyd said. “There’s no question in my mind that young horses coming through is the formula for success. They’re the secret to longevity in this sport.”

Santos moved from sunny California to the freezing cold in Pennsylvania in December, and Boyd set about forming a partnership with his new ride. “He’s young, and we’re not in a hurry with him,” he said. “Erin did a sensational job producing him to where he was when we got him, and he’s very well educated. For me, it’s about building the trust and getting to know each other at the start.”

Next week on EN’s Got Talent, we’ll learn more about Boyd’s competition plans for Santos this year, as well as his outlook on the future for the talented gelding.