We hear all the time about horses at the top of the sport, but what about the next generation of equine talent? EN’s Got Talent introduces the future superstars of the sport, interviewing riders about how they’re tackling training with these youngsters. Have you spotted a spectacular young horse at an event you think should be highlighted in this column? Email us at [email protected] 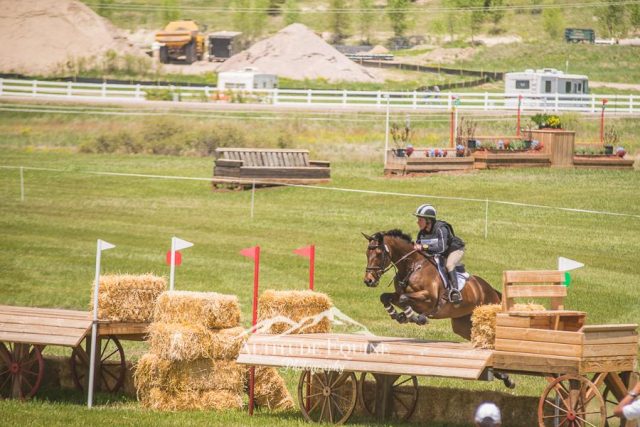 Dani Sussman has always had an affinity for Thoroughbreds, particularly pocket sized ones well-suited to her diminutive 5’1″ frame. Throughout her career, though, Dani has ridden more than a few horses who were perhaps a bit larger than suitable for her petite build. She rode what she could, gaining the invaluable experience that comes from handling horses of all types.

So it wasn’t until a smaller former polo pony came to her barn that Dani truly got to try out a horse more her size. Thurston B Howell is owned by Carol Mavrakis. The diminutive Thoroughbred gelding stands just a touch over 15.1, a big change from some of Dani’s other 16.3-17 hand rides.

Thurston B Howell first came to Dani when Carol brought him down to Dani’s Colorado base from her home in Wyoming. “I first met Carol when we were both in California competing and we were both at Robyn Fisher’s barn,” Dani recalled. “She brought Thurston down and asked me to ride him, and he was unbelievable. So much power and talent.”

The ride wasn’t Dani’s right away as Carol continued to compete the then 7-year-old gelding at the Novice level. “About a year after we first met, Carol called and said that she wanted to bring Thurston down for some training,” Dani said. “She brought him down and about two weeks later I ran the Novice at Colorado Horse Park with him. She’d ridden him through that level and had done a great job with him, and he was spectacular for me.”

Dani went on to step the gelding up to Training level and then Prelim, where he currently competes. Since the move up, Thurston has finished in the top five on five different occasions, gaining more experience and mileage as he goes.

For Dani, having an eye out for that special horse who might just be the special one who wants to continue up the levels is a habit, and Thurston has checked all of the boxes so far. “When I have a horse that I’d like to think of taking to the upper levels, I think it has a lot to do with their personality and temperament,” she explained. “Do they have the heart to really put 110 percent into this? I think you can tie some of that into the Thoroughbred; Thoroughbreds naturally have a lot of heart.”

Dani has high hopes for the little Thoroughbred who could, the courageous Thurston who has proven that size is no challenge. The biggest challenge Dani has focused on with Thurston, whose short, polo bred build makes dressage difficult, is the first phase of competition. “He’s a little guy and not a huge mover, so we have to do better than just average,” she said. “He has to be very correct to look impressive.”

All things considered, though, Dani is trying not to plan too far in advance. She’s setting her sights on the CIC1* at Richland Park this summer, but beyond that she plans to let the horse tell her what they should do next. Meanwhile, she’ll keep asking the questions that a potential upper level horse would have to answer: “Will he help out if I make a mistake? Are they giving you feeling that there is scope to spare?”

“He’s just an unbelievable horse,” Dani said. “Carol did a really nice job of producing him, and when I took the ride over, we didn’t really know what would come next. So it’s been a really special journey with him, thanks to Carol.”