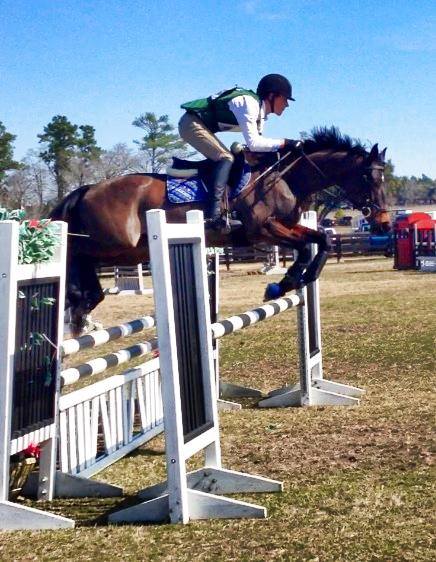 Daniel Clasing and his girlfriend, Liv Stringer, run a successful polo and event training facility in Maryland. Throughout the years, Daniel and Liv have worked together to produce top quality horses in their respective sports, and this partnership became all the more beneficial when Liv came across a 6-year-old Thoroughbred mare who was being marketed as a polo prospect.

“I found Crimson at a steeplechase barn in October 2011,” Liv said. “I was in Virginia for the fall races and was later discussing polo prospects at a local tavern. One friend mentioned a smallish mare that was in his barn. She was being used to pony babies and do a little hunting, but he thought I may want to look at her for polo.” Later that evening, Liv found herself hopping on Crimson at her friend’s barn, jogging her in a few circles and jumping over a few stacked hay bales. “They insisted this was necessary, although I prefer that my polo horses’ legs stay on the ground!”

A few days later, Crimson (Fast Play-Etta) was on her way to her new home with a warning that she didn’t like to hack out alone, and she spent the winter learning to hack on her own and getting used to a polo mallet and ball. Liv quickly discovered that the mare despised two things: traffic and horses coming up behind her, both of which are fairly necessary on the polo field. 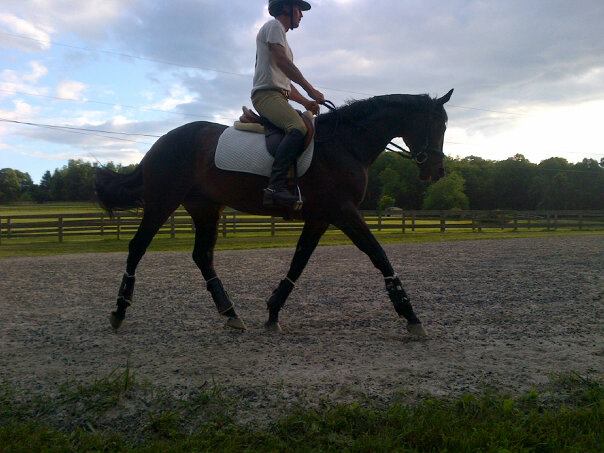 Daniel flatting Crimson a few months into their partnership. Photo by Liv Stringer.

After realizing that Crimson may not be the best fit for her polo string, Liv decided to enlist Daniel’s assessment to find out if the mare might make a good event prospect. “He finally came to watch me ride her one day, made me jump her over a few crossrails and declared that he’d like to try her,” Liv said. “The next day, he jumped her himself. She popped over the crossrails, so he took her over a little coop. She jumped in huge, landed and slammed on the brakes, bucking him right off into the dirt!”

Daniel was not discouraged, though, and thus began their partnership together. “I had seen her a few times previously, but I didn’t think too much of her to be honest,” Daniel said. “She was low on the totem pole in the herd, to the point where she would get beat up by the other horses, and even watched a Jack Russell steal her grain one time. But she has actually taken to her eventing training quite naturally.”

Daniel and Crimson spent their first few rides getting to know each other. “She would get offended very easily, and she had some mare-ish tendencies such as not wanting to go away from the barn. But we worked through all that and have been making steady progress.” Crimson already had a good flatwork base by the time Daniel took over her training, and she makes an elegant package when she exhibits her knowledge in the dressage ring. “She’s very well put together, and she makes for an elegant picture. She’s very naturally well balanced.”

Next week on EN’s Got Talent: We will find out more about Crimson’s re-training, including how she has overcome some issues she has with traffic in the warm-up ring, as well as Daniel’s ambitions for her in the future.