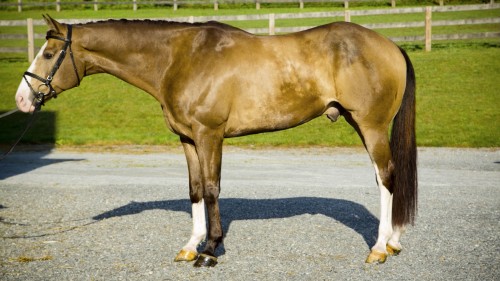 This week’s featured horse on EN’s Got Talent is a bit of a celebrity in that he headlined an EN meme post of George Morris that went viral last month. Thousands of Facebook likes later, Dom and Jimmie Schramm of Evention fame — Season 2 just launched! — contacted me about featuring the very same horse in this series. Meet Mellow Johnny, a 7-year-old buckskin Thoroughbred/Paint gelding Dom is currently campaigning at Training level. The Schramms acquired the horse after former owner Chrissy Allison, who used to ride with Jimmie in Dallas, began battling some health issues, and Jimmie convinced Dom to consider the then coming 4-year-old as an eventing prospect.

“He’d mainly just done some basic dressage at that point, and he hadn’t spent much time outside of an indoor arena,” Dom said. “When I finally took him outside, he was spooking at grass, cars, his own shadows — essentially everything. But I thought he was a really precious horse, and Jimmie and Chrissy kept pushing me to ride him. I popped him over his first couple of fences, and we ended up deciding to take him.” Dom immediately started working on desensitizing “Tex,” and he soon realized the spooking was almost a game for the horse. “He gets in this mode where he’s almost looking for something to spook at,” Dom said. “He has that bit of cheek on him.” 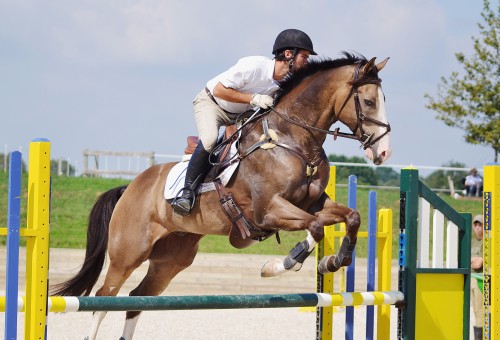 Dom and Tex at the George Morris clinic. Photo by Jenni Autry.

Dom saw Tex’s cheeky personality firsthand at the horse’s first show at Poplar Place in March of last year, where they contested a Novice event together. “I took him around in warmup and he was being his usual fancy self, and I almost got a little bit cocky riding this nice horse around,” Dom said. “I was going around the arena before the test and a little crowd had gathered to watch him go. As I went past the judge, she rang the bell and he saw something imaginary and started leaping and bucking and striking. I used all of those 45 seconds to try to settle him, and he still ended up passaging down the center line. I was basically just trying to survive at that point.”

Despite breaking during the free walk and picking up the wrong lead due to being so tense, Tex still scored a 25.7 on that first dressage test. “I think the judge was so smitten with him,” Dom said. “Ever since then, I’ve not taken his warmup for granted at shows. He’s a lot better now and knows his job.” Since then, Tex — who is by the Thoroughbred stallion Noble Houston (Houston X Vague Game, by Vaguely Noble) and out of a registered palomino Paint mare — has won four of his eight events in his career and finish second in two. “He’s the first horse I’ve had the opportunity to produce since I moved from Australia, and it’s great to have a horse with such natural talent because you’re in no rush and can give them a successful start in the sport.”

Next week on EN’s Got Talent: We’ll learn all about Tex’s 15 minutes of fame when George Morris decided to ride the horse during a USEF High Performance Jumping Clinic at Boyd Martin’s Windurra Farm last month. “It’s always a bit of a treat to see a rider like George on your horse,” Dom said. “He jumped him around, which actually looked a bit sticky at first. Once George got the hang of him, he jumped really well. George said he’s a very cute horse and a quality horse. He explained that Tex has two moments in his jump because he’s so careful. Until you get the hang of riding both moments, it’s hard to get your timing perfect.”