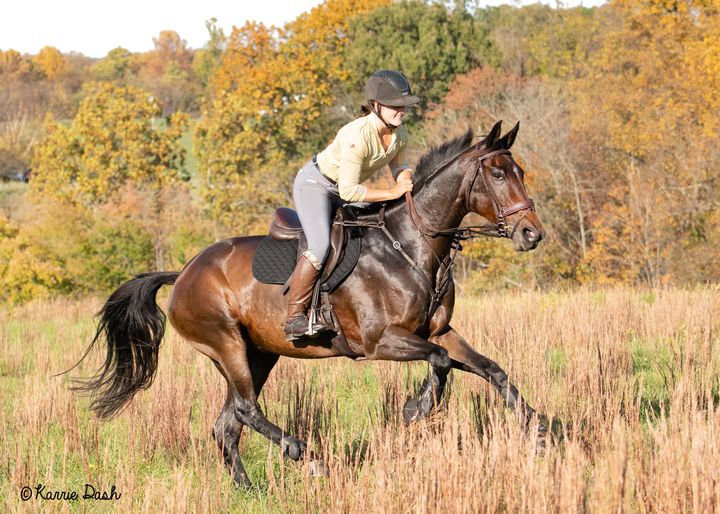 It was a bit of happenstance that brought Ema Klugman to the United Kingdom during Thanksgiving break in 2017. Ema, who is Australian by citizenship, traveled to England to meet up with her mother, who was giving a presentation as a part of her travels working for the World Bank. With some extra time on their hands, Ema’s mother made a few calls and set up a few horses to go and look at. “Why not?” she and Ema mused as they set off into the countryside. These are, of course, famous last words.

Upon arriving at Pennie Cornish’s yard, the first horse Ema tried that day was a “gangly, unruly mare” that, despite her inexperience, exuded talent. Ema compared the feeling she had on her first ride aboard the 5-year-old Zangersheide to that of riding RF Scandalous, the ride of Marilyn Little, whom Ema had worked for for several years.

“Having had the opportunity to ride several quality horses, including ‘Kitty’, at Marilyn’s, I kind of knew what that quality felt like, and it’s what I felt on this mare,” Ema recalled. “And she wasn’t even the horse we were originally supposed to try. She was also the first horse we tried on that trip, and I felt like I needed to go and try others because you aren’t supposed to go with the first one!”

And so Ema and her mother went through the motions, venturing to try a few other horses but eventually returning to Pennie’s yard to have another look at the mare, who would later become known as Bronte Beach Z.

“I sent videos of her to (longtime mentor Packy McGaughan) and Marilyn, and they both immediately told me to buy her,” Ema explained. “They both had such a great eye for horses, so I trusted their instincts.”

In rather accidental fashion, Ema found herself with a new talent to add to her growing string. As a young professional, Ema recognizes the importance of continuing to produce talent. She’s amassed a healthy amount of experience aboard her trusted veteran partner, Bendigo, but this mare added some additional depth to her program. 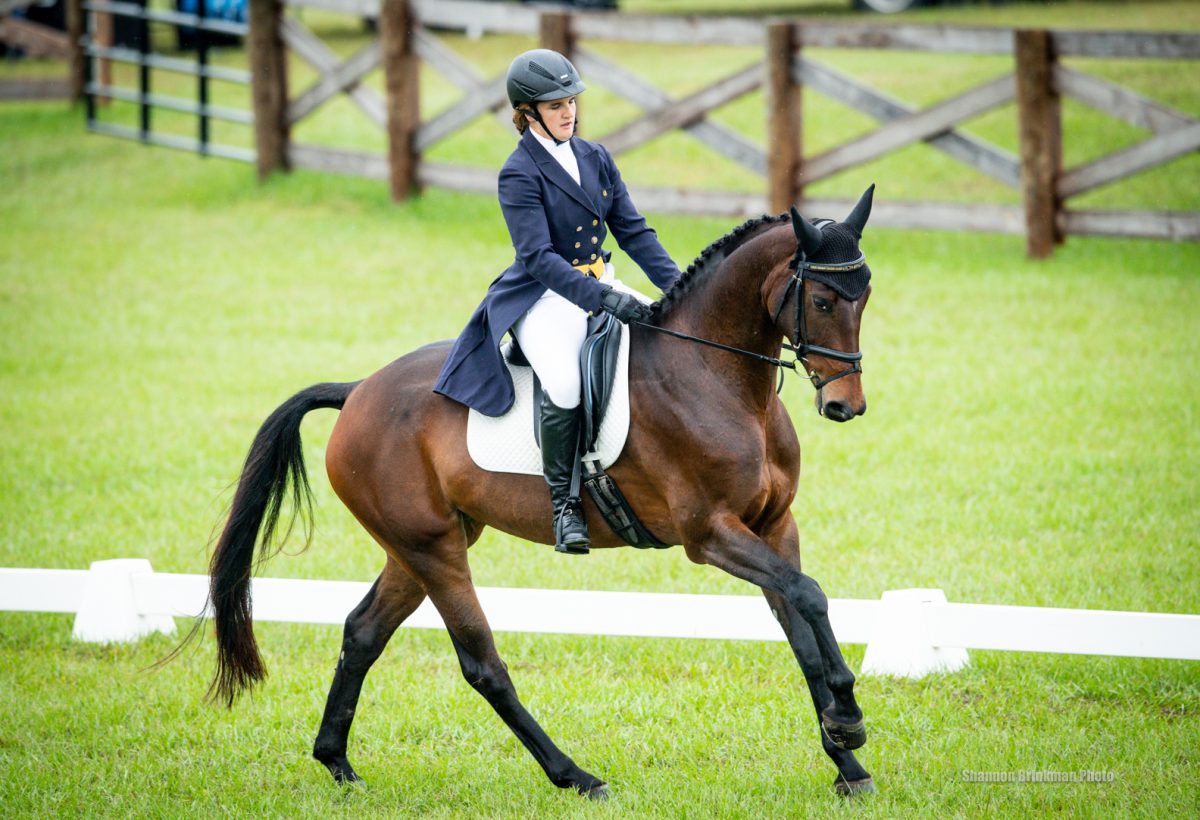 While competing in the CCI4*S at Great Meadow International earlier this summer, Ema and Bendigo turned in one of the quickest rides across the country on a track that only saw five pairs complete inside the time. The smooth, efficient ride prompted another of Ema’s mentors, Karen O’Connor, to send a text: “You need to make every horse from now on feel like Bendigo on cross country.”

It’s advice Ema took to heart as she embarked on Bronte Beach Z’s training journey. Of course, the two horses presented their own individual style that required some adaptation from Ema. Bronte, for one, is a little spookier than her stablemate. “She spun my mum off once during the early going,” she laughed. “And initially she was so spooky at shows that I could hardly get her to focus on anything. On her first cross country course, her legs were everywhere and she was looking at everything, so I actually fell off at that first show.”

As is often the case, it wouldn’t be until the fences got a bit larger that Bronte began to show more interest in her career. “Once she started going Prelim, the jumps were more interesting and she had to think more,” Ema observed.

Ema says it’s a privilege to sit on a horse with so much natural ability. Bendigo, who is 18 this year, was the horse with whom Ema has experienced most of her firsts: first FEI, first Advanced, first chance to be named to a training list for Australia. But Bendigo was a horse that used his heart to make up for what he lacked in natural ability, forming a strong partnership with his rider that enabled them to continue moving up the levels. This new mare has taught Ema how to ride proper dressage and how to harness natural scope and ability. She credits work with her dressage coach, Hilary Moore Herbert, as instrumental in the progress she has made with the mare. The pair recently won the CCI3*L at Virginia Horse Trials on their dressage score. 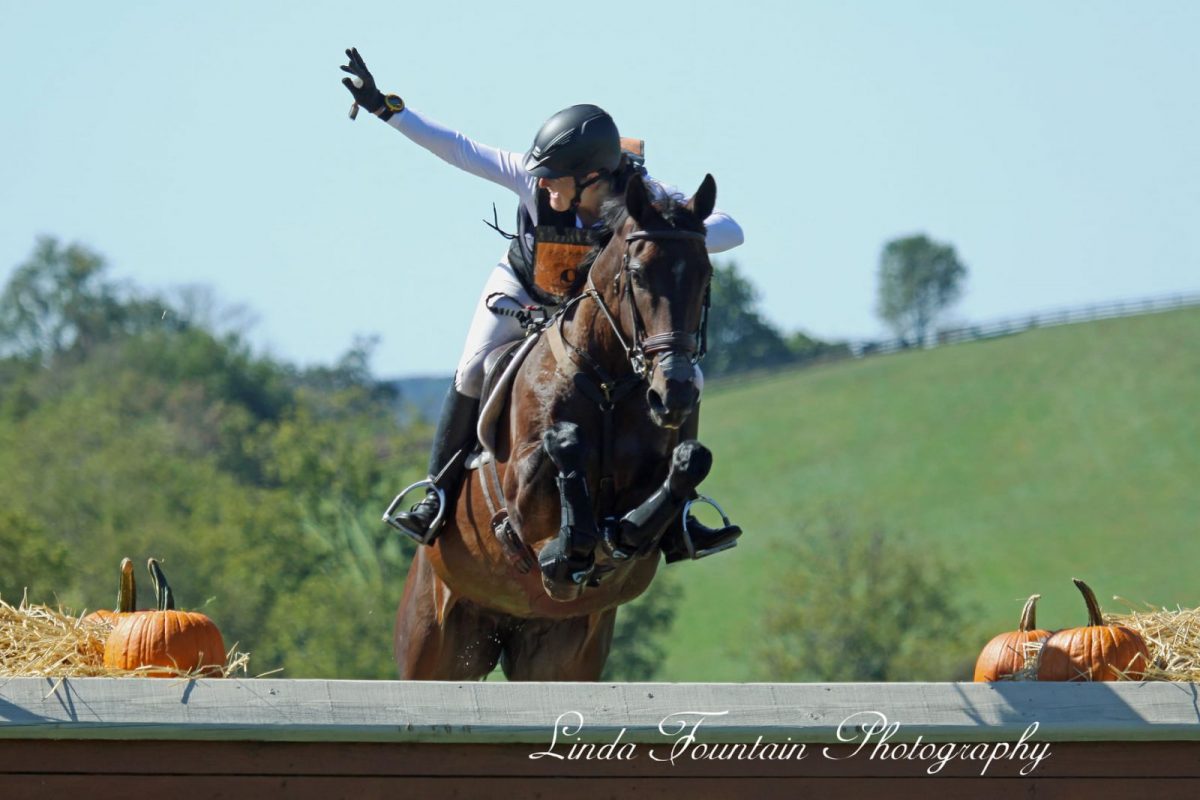 Waving to her adoring fans. Photo by Linda Fountain.

Ema also credits her selection to Australia’s Generation NEXT squad as highly influential in her career. The Generation NEXT Squad is a newer tier of Australia’s high performance program that specially caters to younger riders. The program approaches its education with individual performance plans and virtual meetings while assisting the riders with everything from specific training to nutrition and veterinary care.

“We have team calls and usually there will be an expert from the industry on to help us,” Ema explained. “We’ve covered topics like sport psychology, riding quick on cross country, getting a horse ready to show jump on the third day, et cetera.”

Top of mind from this program is the concept of concrete goal setting and using these performance indicators to mark a rider’s progression. “We really don’t do enough concrete goal setting,” Ema observed. “We’ll go to a show and hope we do well – but what does that actually mean? You have to look at your averages and also understand how to do a good evaluation after each competition.”

A self-proclaimed “nerd” when it comes to studying her sport, Ema says having this practice of concrete goal setting has informed her riding and helped her better understand her strengths and weaknesses. And as she continues to produce her talented mare up the levels, she’s feeling confident that the support from her network and the Generation NEXT program will help her continue to build on the success she’s already had. After the loss of Packy earlier this year, Ema says her journey with this special mare is all the more meaningful. “I carry his wisdom with me always and often have his voice in my head,” she reflected. “It is really special that he told me to buy this mare!”

Ema created an accessible syndicate program for Bronte Beach Z, for which there are still a handful of opportunities to get involved. You can learn more about the Bronte Beach Z Syndicate here.