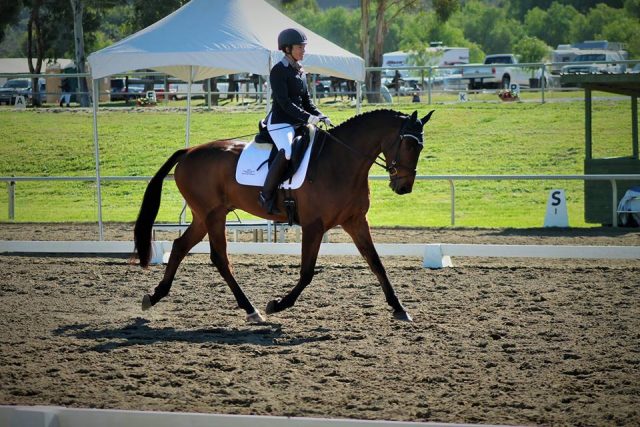 Just over a year ago, Erin Kellerhouse checked a big item off of her bucket list: a horse shopping trip to Ireland. It was a trip Erin had always wanted to take, and the opportunity to take a client shopping presented itself late in 2015.

When Joy Simon, an Irish horse lover, elected to retire her horse, she suggested a trip to the home of the hardy horses as she searched for her next partner. “I decided to go and have a look for a horse for me,” Erin said. “It was a whirlwind trip over two days trying a bunch of horses.”

Seeking a young horse to produce through the levels, Erin was selective as she rifled through many top quality prospects. “I didn’t want to import a horse if it wasn’t perfect for me, so after the first day and trying so many horses, I was thinking I might not find it.”

It wasn’t until Erin and Joy visited Anne O’Grady, who previously produced the legendary Ballynoe Castle RM, that she found a horse that would fit the bill. “We picked six or seven horses to look at under saddle, and as soon as this one walked in, I knew I wanted to get on him.”

Woodford Reserve (Tinarana’s Inspector — Laharns Laughton) was four years old at the time, wrapped in a plain bay package but still impressive to look at. “He’s only about 16.1, but he’s so uphill that he often looks much bigger,” Erin said. “The second I got on, I knew I wanted him. I actually picked two to vet, and the other one didn’t pass, which I was okay with because I really wanted ‘Woody.'”

“Woody” arrived stateside in October of 2015, and Erin spent some time getting to know her new ride. “I was really tempted to do the Young Event Horse with him, but I barely knew him, so we spent the winter getting to know each other,” Erin said.”

Rather than rush a promising relationship, Erin took her time and brought Woody out at Novice in February at Galway Downs. Woody lowered one rail to finish in third position in his U.S. debut, further exciting Erin about the future. Later in the spring, Erin competed Woody in his first Young Event Horse qualifier at Twin Rivers, which he won on a score of 81.69%. 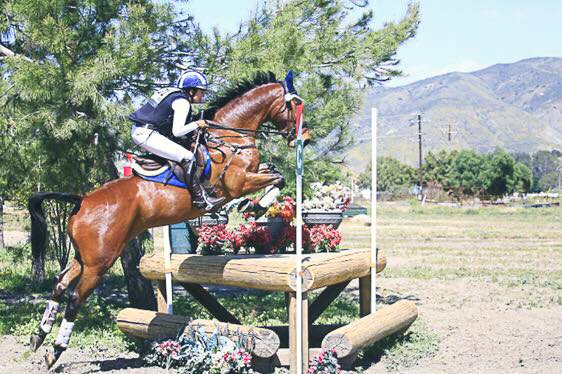 Woody shows off his hops. Photo by Captured Moment Photography.

“He’s come along pretty fast because he’s got a brain to die for,” Erin explained. “He’s sensitive but reasonable, and he takes his job really seriously.”

Indeed, if there were to be any “struggles” that Erin would speak of, it would be that Woody sometimes almost takes his job too seriously. “He’s a big trier and he’s really serious,” she said with a laugh. “Sometimes I feel like I have to tell him to lighten up! Even though he is so uphill, dressage was difficult for him to make sense of at first. Now he’s getting strong and it’s all starting to get easier for him.”

Woodford Reserve won the majority of his Training level starts before debuting at the Preliminary level in March of this year at Galway Downs. Erin and Woody finished second in this debut, which was quickly followed up with a win at the level at Fresno County Horse Park.

“I felt like he may have been getting a bit bored at Training level,” Erin said. “But I don’t want to over face or scare him. At the same time, when we went Prelim at Galway you could tell he was definitely having more fun.”

Erin has plans to really build the young gelding’s confidence and skill at the level, collecting Prelim miles throughout this year and potentially contesting their first one-star together later on. “I’m really ready to buckle down and do some pure show jumping this summer as well,” she continued. “I want to get him really solid at this level before we move forward.”

With a potential true upper level horse on her hands, Erin is thankful for the opportunity to go on her first shopping trip to Ireland, especially given the successful outcome. “I’m completely sold on (the Irish Sport Horse breed,” she said. “I’d love to go back and shop more for myself and for my students. The brains are unbelievable and they’re so straightfoward. I think what you really get when you go over there is the quantity of quality, and you know they’re hardy from living out in fields their whole lives. I think they’ve been exposed to a lot of things.”

As for Erin’s tall Irish boy, we’ll be looking forward to watching the partnership continue to blossom. Keep an eye out for this one if you’re on the West Coast, you’ll definitely want to remember the name — and perhaps raise a glass of your very own “Woodford Reserve.”