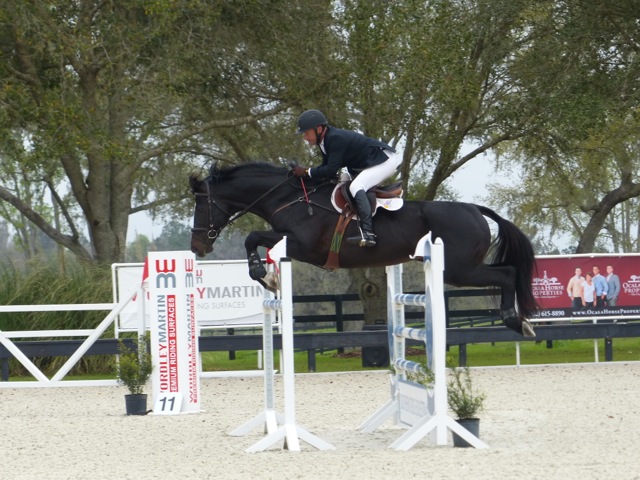 Joe Meyer has another star on the rise in his barn. Although Joe has had a less than ideal past couple of months, dealing with a broken pelvis and the peaceful passing of his veteran partner, Snip, he is still excited to have a wonderful young horse coming up: a 7-year-old Hanoverian/Thoroughbred stallion named South Paw.

South Paw’s sire is the well-known Hanoverian stallion, Sir Caletto, who stands in California and is known for producing elite level hunters. South Paw was bred by Katy Cowan and owned by Nora Yaney, who had a lot of previous experience with Sir Caletto offspring. Sir Caletto was bred with the Thoroughbred mare Rodozoom and Nora handled the young South Paw in his earliest days. Incidentally, Nora moved in next to Joe’s property in Florida, and a partnership was formed to bring South Paw into Joe’s barn once he was started under saddle.

Joe began campaigning South Paw as a 5-year-old and primarily competed him in some jumper classes at the 1.25-meter level in 2013 as a 6-year-old. “He’s always done everything quite easily, and by the end of last year, we really wanted him to start eventing,” Joe said. “He started off a wee bit ditchy and got me off at a triple bar with a water tray underneath when we first started. I think we jumped every ditch in Ocala and even built one on our property. Once we did all that, he started to realize that he could do it and kept progressing from strength to strength.”

By the time Joe began eventing South Paw in earnest, he was already very practiced in the show jumping phase and had a good aptitude for cross country. “Apart from the initial ditch issue, he really was keen for it when I took him cross country schooling,” Joe said. “He’s very brave and scopey. He looked like a hunter before, but now that we’ve got him trimmed down a bit, he looks more like an event horse. I kept asking myself the questions: Can he jump and can he gallop? And he kept answering them, so I figured I should have a go at (eventing) with him.”

South Paw came out at the Training level late in 2013, placing 13th at Ocala Horse Properties. The black stallion came out swinging this year, easily stepping up to the Preliminary level as a 7-year-old and picking up five top-five placings before moving up to Intermediate. “Especially in the dressage, he’s really starting to show me what’s in there,” Joe said. “We’ll get it out of him, though. I think he’s got a lot of potential to keep moving up.”

Next week on EN’s Got Talent: We’ll learn more about how Joe has gone about fine-tuning South Paw’s skills in the dressage, as well as his plans for the future with this young stallion.