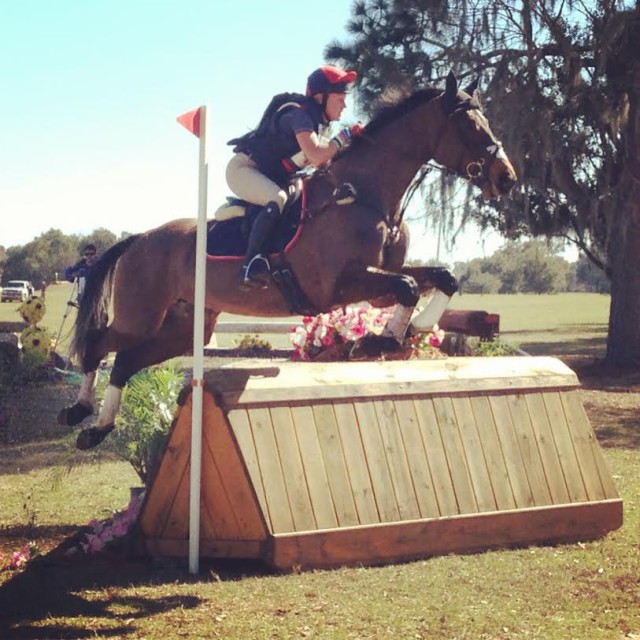 Justine Dutton made a name for herself on EN as “the Other Dutton,” and now she’s got another talented horse in her arsenal who will be making her CIC2* debut this afternoon at Plantation Field. Jollybo is a 10-year-old British Sport Horse mare who Justine found in December of 2013 on a shopping trip in the UK.

“I went with a client who was looking for a dressage horse, and (Jollybo) was one of the horses they pulled out,” Justine recalled. “I got on her and immediately we knew that I would want her. I tried to think of everything I could to make me not like her, because I really wasn’t shopping for myself, but I just really liked her.“

Justine put together the Sport Ponies UK Syndicate to purchase the mare, and before long Jollybo was on her way to Florida to join Justine at her winter base. The mare had competed up to the one-star level with Anthony Clark in the irons previously, and Justine brought her out at Preliminary over the winter. “When we first came out, we really didn’t get along straight away,” Justine said. “I think she was used to having a stronger rider, and with me she kind of got too bold and forward. I struggled with allowing her to go forward, so we’d fight about that. I spent a lot of time trying to figure her out, changing bits and trying different things to make it work.”

On paper, Justine and Jollybo’s early starts at Prelim are solid. The pair finished in the top 10 in the first three events together, but Justine still felt there was work to be done. She began working the mare with coach Buck Davidson, who advised her against her initial thought to try to sell the mare. “There was a point where I thought maybe she wasn’t for me,” Justine said. “I just had to figure her out, and we sort of came to an agreement. I would agree to let her come more forward and she would agree to let me have a bit more say in what was going on.”

In March, Justine took Jollybo in the Prelim at Poplar Place, and she said she felt that this was the first event where she really felt their partnership beginning to click. “I decided that I wasn’t going to wear a watch on cross country, and that I was just going to canter around and teach her that she didn’t need to go blasting around. We just continued to build on that after Poplar, and then we went to Fair Hill and I felt that I could add a bit more speed.”

Buck was persistent with figuring out the mare on the flat, as he knew that improving Justine and Jollybo’s communication on the flat would translate into an easier time over fences. “He was right of course,” Justine laughed. “We got to the point where we were both ready to take the next step and move up to Intermediate.”

Justine moved the mare up to Intermediate at Plantation Field in June, and immediately found that the level almost suited Jollybo better. “Her dressage improved, and the fences just felt easier for her. Then we went to Jersey Fresh (in July) and I walked the course and thought ‘well, I guess we’ll know if I really have an Intermediate horse after this!’ And then she coasted around just like (Huck Finn) would have, and it just felt amazing.”

Justine and Jollybo won the Intermediate that weekend at Jersey Fresh, coasting home with 3.2 time and show jumping clear to finish on a score of 39.5.

“I very well think she could go Advanced, maybe next year,” Justine said of her talented mare. The pair will trot down centerline in their first CIC2* today at Plantation Field, an event Justine chose as a qualifier to get to the CCI2* at Fair Hill next month.

Next week on EN’s Got Talent: We’ll learn more about Jollybo and her personality around the barn, as well as how her and Justine’s weekend went at Plantation Field.