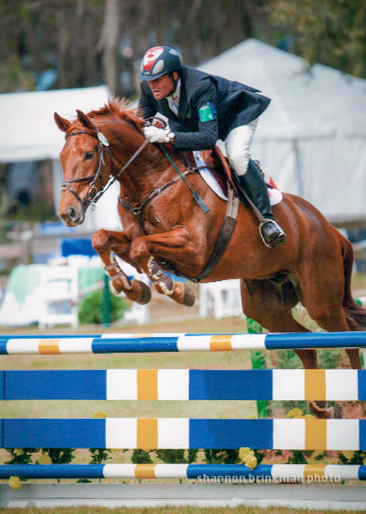 Kyle Carter doesn’t want to go to the Olympics on a horse he purchased a few months before the Games. Like so many other top riders, Kyle craves the satisfaction of breeding an upper-level superstar and campaigning the horse through the levels himself. That’s the defining goal of his breeding program, which has been very successful thus far.

Most of his homebreds have competed at least through the intermediate level, with one even running at Rolex. But none of his homebreds excite him quite as much as FR’s Trust Fund, a 6-year-old Dutch/Thoroughbred cross Kyle hopes has the talent to go all the way.

“Finn is the first homebred we’ve bred of any height,” Kyle said. “Everything else has been 15.2 to 16.1 hands. Finn is 16.3, so it’s nice to finally get one that looked like he would mature to the right size. The other thing about him is from the earliest age where you could see the type of movement he would have, he had the most incredible gaits.”

Kyle’s breeding program generally uses prominent jumper lines on the sire side and Thoroughbred mares that have had successful eventing careers. “All of my broodmares have gone Advanced at a minimum,” Kyle said. “All of them have to be successful, have good movement and be good jumpers. I don’t mind quirks, but they have to be able to perform and they have to be sound.”

Rumor, Finn’s dam, is an excellent example of the type of broodmare Kyle selects for his program. A fierce chestnut Thoroughbred mare Kyle purchased at a broodmare auction as a 4 year old off the track, Kyle took her to Rolex in 1993 when it was still a horse trial, where she placed eighth. She also won multiple events at the intermediate level and won the Bromont CC1*.

For Finn’s sire, Kyle chose Ringwood Tinka Too, a Dutch/Irish stallion with Olympic show jumping lines through his sire Tinka’s Boy, who won 26 Grand Prixs during his career. “Everybody thinks they have a special foal, but it’s what they grow into that really matters,” Kyle said. “When he was 3, he really started to look like he could be something. He would just float across the field. People who would come to the farm to school cross country would always notice him and ask about him.”

Kyle asked David O’Connor to look at Finn when he was just starting under saddle as a 3-year-old. “We all think what we breed is special, but you have to be pragmatic and make sure you’re not barn blind,” Kyle said. “David asked if we would sell him, because that’s what we do. But I wanted to produce him because I knew I couldn’t go out and buy a better prospect.”

As Kyle started Finn’s training, the horse continued to ooze talent, as well as a very quirky personality. “He’s really naughty, and he’s scared of everything,” Kyle said. “If he sees a squirrel in the woods, he just spins and runs away. He’s not ditchy, but he’ll just decide sometimes to spook at jumps. It could be a plain 18-inch vertical and you have to ride him down to it like it’s a ditch and brush at Burghley.”

Finn’s dam is likely to blame for the horse’s quirky personality. Kyle said she threw him more times than any other horse he’s ever owned. Ralph Hill, who owned the mare for a brief period of time, said the same thing. “All her other other babies have been that way, so I can’t say I wasn’t expecting it,” Kyle said.

“The weird thing with him is at the shows, he doesn’t really act like that. He goes into those environments and he’s totally unfazed by it. I don’t know that I’ve ever had a horse that could compete the way he does.” Finn has now completed four intermediate events as a 6-year-old, most recently placing eighth in the CIC2* at Poplar Place and second in the CIC1* at Red Hills. “He’s found something to apply himself to,” Kyle said. “It’s helped him go from one extreme to the other.”

Next week on EN’s Got Talent: We’ll take a deeper look at Finn’s competition history and recent results, as well as learn more about the quirky personality that makes him so interesting to have around the barn. We’ll also talk about the point at which Kyle knew Finn had the potential to go all the way.

“The movement definitely looked like it was always there,” Kyle said. “His conformation and build always mirrored an upper-level horse. But what he really brings and why I think he’ll make it is because his competition attitude is second to none in the barn.”