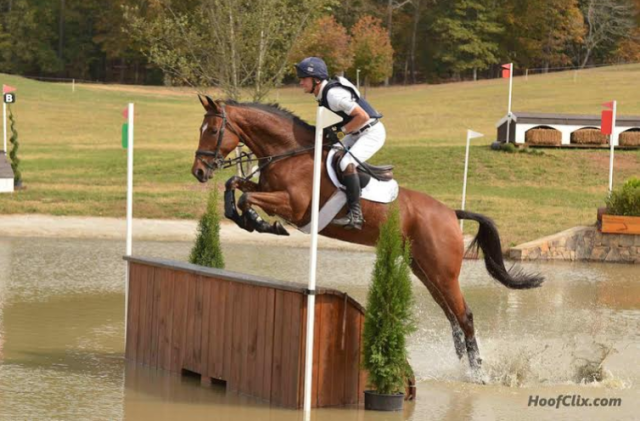 Leslie Law was on a European horse shopping trip late in 2011 when he came upon a 4-year-old British Sport Horse gelding after hearing about the promising horse from JP Sheffield. “JP is a good friend of mine, and he’d had the horse for a short while with the view of producing him for sale,” Leslie said. “We spoke regularly on the phone as it was, and he mentioned the horse so when I was over there I went to have a look and we ended up buying him.”

Beatrice Rey-Herme, who owns some of the Laws’ other horses, was on the lookout for a new horse, and found herself as the owner of an exciting horse in Tout de Suite, or “Colby” as he became known at home.

“When you’re looking at horses, a big impression is just looking at them over the stable door; it’s that first ‘attraction’ if you will,” Leslie said. “They have to look the right type, with enough quality and Thoroughbred characteristics. They have to look like an event horse, which is difficult because event horses can come in all shapes and sizes.”

When Leslie was introduced to Colby, Leslie was immediately impressed. “He came out and had three fantastic paces and a great walk, which I really like in a horse,” he said. “He was still quite young, so as far as the jumping goes, it was hard to evaluate, but it felt like he had power and scope. He checked a lot of boxes in a short amount of time.“

Once Tout de Suite was brought to Leslie’s farm in Ocala, the gelding was started slowly to allow time for him to continue growing and maturing into himself. “The great thing he’s turned out to have is a wonderful temperment, which is probably one of the hardest things to evaluate when you’re buying a horse because you see them for such a short time. That tempermant has gone a long way with his success so far.”

Standing right around 16.3 hands, Tout de Suite is a big and rangy horse, which brought about the need for Leslie to produce him patiently. Tout de Suite competed in the Young Event Horse competition at Longwood Farm early in 2012, earning an impressive 81.02 which boosted his connections’ confidence in his potential as an event horse.

“We started him out at the Novice level, and he quickly moved up to Training,” Leslie said. “We took him to AECs at Training level in 2012 (where the gelding placed fifth), and then he ran Preliminary the rest of the year.”

Colby did not disappoint after moving up to Preliminary, never finishing out of the top three throughout his entire year at that level. His success culminated with a win in the Preliminary Horse division at the 2013 American Eventing Championships. “He just kept answering the questions. I think his tempermant and natural talent was one of great assets to keep him stepping up the levels, quite honestly,” Leslie said.

Next week on EN’s Got Talent: We’ll learn more about Colby as he continues to progress, now at the Intermediate level. What has Leslie done to ensure he puts a proper foundation on this exciting young horse? What philosophies does Leslie exercise when it comes to grooming a horse for the upper levels? Stay tuned to find out much more!