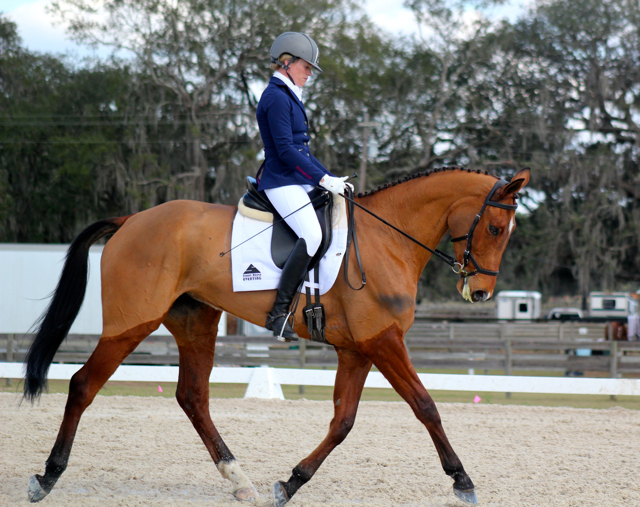 Sinead Halpin and On Cue. Photo by Samantha Clark.

In our previous installment of EN’s Got Talent, we met Sinead Halpin’s exciting mare, On Cue. An 8-year-old French Thoroughbred, “Q” has identified herself as a promising event horse for Sinead’s string, and while the two did not necessarily have the easiest start, their partnership has continued to solidify as they tackle Preliminary level.

Sinead’s goal with Q has always been to get her to the point where she is competitive across all three phases before she considers moving her up to the next level. “I want her to be placing in the top three in at least three competitions in a row so she’s good across the board,” Sinead said.

At the heart of Q’s success has been the raw talent she displays in competition. “She’s just brilliant across all three phases. She has a ton of Thoroughbred in her, has an amazing gallop and is super brave,” Sinead said. “I wouldn’t say one phase is better than the others. She is getting more consistent daily; I just have to make sure we do things on her timeline.”

Most recently, Q finished 12th in the Preliminary division at the MCTA H.T. in Maryland, where she added just one rail in show jumping and some time in the jumping phases in a very competitive division. “I would say the greatest accomplishment so far with her has been being able to just walk right into the start box now,” Sinead said. “Last year I was having trouble getting her anywhere near it, which is just another example of her needing to do things on her own time.”

Sinead has a goal of doing the two-star with On Cue at Fair Hill this fall. “It seems very doable. She could go out and do the Advanced dressage test now, and she will jump anything,” Sinead said. “It’s just a matter of making sure she is fully ready for the step up. Everything about her tells you that she’s always in tune and aware. She sees everything, and I absolutely love having her in my barn.”

On Cue is owned by On Cue Syndicate members Chris Turner, who also owns a portion of Manoir de Carneville; Kristin Michaloski; Genie Hatch; Adrienne Lorio; the Callanan Family; and Bernadette Codgell. Sinead is eternally grateful for the ongoing support of this promising mare’s owners, and we look forward to seeing their continued success together.