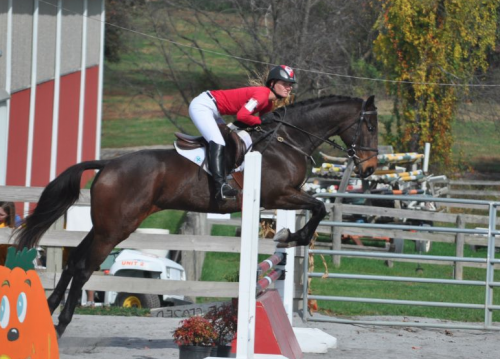 Last week we met Steph Rhodes-Bosch and Seahawk, her 6-year-old Thoroughbred gelding she first rode as a 2-year-old while exercising racehorses in Ocala. When Mosby, a Seattle Slew grandbaby, turned out to have zero interest in being a racehorse, Steph took him on as an eventing prospect in 2011. Mosby showed that he was much happier with his new job as an eventer, winning the first event of his career in beginner novice at Longwood Farm in January 2012 as a 4-year-old. “He loves to go into the competition arena and do his thing,” Steph said. “I don’t know how he knows, but you point him down center line or take him into the show jumping ring, and he just gets bigger and taller.”

Mosby competed in his first recognized event two months later in beginner novice at Rocking Horse III, where he finished in second place on his dressage score of 31.4. Steph moved him up to novice in the late spring of 2012, which is when she began to encounter some stops on cross country. “He has always been such a pleasure to ride, even when he was going cross country in the beginning and would have some stops,” Steph said. “I couldn’t teach him not to stop the way I usually would because I couldn’t just give him a little tap behind the leg with the whip. He was so sour from the whip from being at the track, and he would just check out. I knew I could get around that and not use a stick. Ever since then, it’s been smooth sailing.” 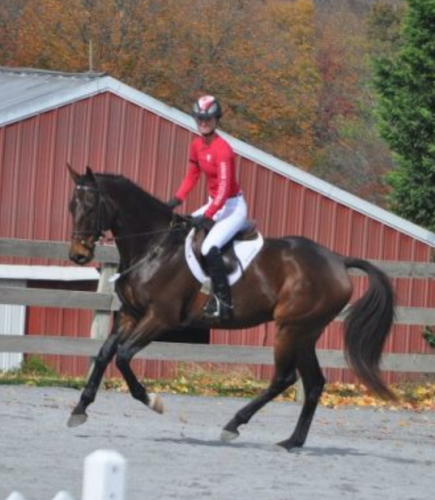 After finishing out the rest of the 2012 season at novice, Steph moved Mosby up to training level at the Ocala Horse Properties Winter II Horse Trials this past February. “In the lead up before the upgrade, I took some dressage lessons from Jacqueline Brooks, a top Canadian dressage rider,” Steph said. “She really challenged me to stop riding him like he was a baby — even if I only pushed him for 10 to 15 minutes to challenge him into a higher frame with more movement behind. All of a sudden I had this fancy, elegant, big-moving horse. So having a trainer tell me it was time to push on my baby horse was a really big confidence booster. His trot was so much more uphill and forward after that.”

While Steph was a little nervous about the cross country at Mosby’s training debut considering his past bobbles, he jumped double clear to finish in second place. “I wanted to make sure I had properly prepared my baby, but he just ate it up,” Steph said. “He didn’t even bat an eye. The things I thought might be difficult, he just did and cantered away.” Mosby was third in his training division at The Fork in April, where he also placed fourth in the 5-year-old YEH division and picked up a qualifying score. Steph will compete in the YEH at Waredaca this weekend, where Mosby can qualify for the YEH 5-year-old East Coast Championships at Fair Hill this fall if he receives another qualifying score.

http://www.youtube.com/watch?v=QMASeHeJMkg
Seahawk in the YEH jumping phase at The Fork

Getting to the YEH Championships is definitely Steph’s main goal for the rest of the year. “I would also love to do some preliminary horse trials if he feels like he’s ready,” Steph said. “I already jump him over preliminary height at home, and we play around with the leg yields and a little counter canter. But the main goal is to make sure he’s solid at the training level for the next few months and focusing on YEH.” Looking ahead to next year, Steph hopes Mosby — as well as her other 5-year-old OTTB superstar True Bellamy — will be ready to run the one-star in Ocala in April. “I think it’s important to pick the time you’re slow with these youngsters,” Steph said. “You get excited about it, but there’s a time for patience that pays off down the road. You want to make sure there aren’t any gaps because you don’t want to get going intermediate and realize there’s something missing.”

Steph is very excited about Mosby’s future and is looking for shareholders to be involved in his syndication. She already has the first syndicate members on board, Scott and Lisa Robinson of New Hampshire, and she is hoping to bring on a few more shareholders to round out the syndicate. “This is the only way I can keep him and produce him and have him be a part of my career,” Steph said. “With Port Authority coming back into competition now, I’m looking forward to building a team who can help me take Seahawk’s career to the next level.” Click here to view the syndication proposal. Those interested in more information about the syndicate can contact Steph at 571-420-3351 or [email protected]

Next week on EN’s Got Talent: We’ll meet Andrew Palmer and Tatendrang, a 7-year-old Trakehner stallion owned by Anissa Cottongim. This horse most recently won his first CIC1* over a tricky cross-country course at CHC International, and he also won his preliminary division at Poplar Place earlier this month. He is sired by the elite Trakehner stallion Onassis, who is also the damsire of Seacookie TSF, William Fox-Pitt’s second-placed mount at this year’s Rolex Kentucky Three-Day Event. “Andrew is amazing with him, and I think they have a big future ahead of them,” Anissa said. “They will run the CCI1* at Fox River Valley in Illinois in a few weeks.” Thanks for the tip, Anissa!