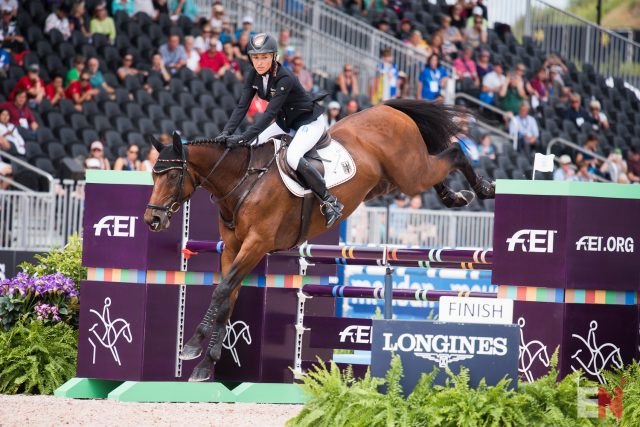 The flags of twelve nations, including Italy, will be raised on the flagpoles of the Pratoni del Vivaro, in Rocca di Papa, for the upcoming Eventing Test Event (May 12-15) for the 2022 FEI World Championships 2022.

More than 60 riders will compete in the CCIO4*-NC-S, which will also be the first leg of the FEI Nations Cup Eventing™ 2022 series.

Team officials will be hoping this short-format competition will provide a few clues as to what cross-country course-designer Giuseppe della Chiesa (ITA) has in store for the ‘real thing’ at 4* long format in September.

Nine nations are sending enough riders to form teams, including the host nation, Italy, which has a strong showing with 16 combinations. The nine nations who will field teams are: Austria, Belgium, France, Germany, Italy, New Zealand, Spain, Sweden and Switzerland. Australia, Brazil and Poland will field individual competitors. View the complete competitor list here. [Editor’s note: Last updated May 5 — note that Lauren Nicholson will be attending as an athlete observer, not competing.]

Jonelle and Tim Price, currently numbers five and six in the world, will represent New Zealand. Jonelle rides Faerie Magnifico and Tim has Falco, winner of Pau CCI5*-L last year. They are joined by Amanda Pottinger, whose mother, Tinks, was a member of the silver medal team at the 1986 World Championships in Gawler, Australia.

French rider Nicolas Touzaint (riding Absolute Gold HDC) will have fond memories of this famous venue because he won individual gold in the FEI European Championships held at Pratoni del Vivaro in 2007. This time he rides Absolute Gold HDC, the horse on which he finished sixth individually and won team bronze at the Tokyo Olympic Games. His Olympic team mate Karim Florent Laghouag, will also compete at Pratoni on his Tokyo horse, Triton Fontaine.

This Eventing Test Event (May 12-15) for the FEI World Championship 2022 will also count for assigning the title and medals for the 2022 Italian Championship and for the Italian Military Riders’ Championship, with 15 riders contesting the Championship.

Admission is free of charge for spectators attending the Test Event.