EN is delighted to partner with EquiRatings to bring you thought-provoking analysis on the future of eventing. Thank you to EquiRatings for allowing EN to share these articles. Click here to read more from EquiRatings, and be sure to follow them on Facebook and Twitter. Go Eventing. 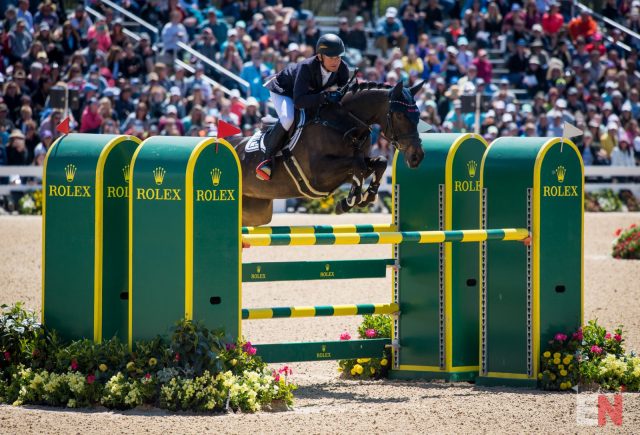 “Since the removal of the dressage multiplier, show jumping has become so influential — you just can’t afford to have a fence down if you want to win.”

Since the removal of the dressage multiplier there has been an increase in the percentage of internationals won with a clear show jumping round. It is statistically significant, but the percentage increase is probably not as high as people thought. It has always been important to jump clear in order to win. It is vital to jump clear cross-country if you want to win, but do we say that cross-country is very influential because of this? No, we don’t. It is more about the overall contribution of penalties, but it must be relevant to winning because that is what drives the sport.

How we describe the phase influence in this article is based on how the top 50% of performers within each phase score penalties, using international results from 2014 to 2018 (the usual dressage multiplier adjustment applies). We break it down by class type because there is a big difference. For the dressage phase, we put the best score on zero so that we can compare it on the same scale as the other phases. The best score is usual in the mid-teens and the median score is usually in the mid-30s, so the plot usually goes from 0 to 20 rather than 15 to 35.

Why do we analyse only the top 50%? This approach focuses on the what it takes to win angle. In order to win an international, the sport should be aiming to require a competitor to perform in the top 50% within each phase – it’s not really an all-round sport otherwise. There is a cost to not performing in the top 50% but focusing on this is actually more of a distraction. Take a hypothetical situation where half the competitors go clear and inside the time on cross-country and the other half get eliminated. On one hand, the phase has been uninfluential because half of the field are on the same perfect score of zero, but on the other hand, the other half of the field are now out of the competition.

Don’t pain your head trying to account for these situations – we have done it for years! We don’t want half of the field eliminated – well, some might but the sport doesn’t. It doesn’t look good and it messes up TV and spectating when half of the field don’t jump the last fence. So, focus on the solution and the why. A competitive eventing result should be one where a competitor performs in the top 50% of each phase – that is hard to argue with, Now, let’s see what that looks like. 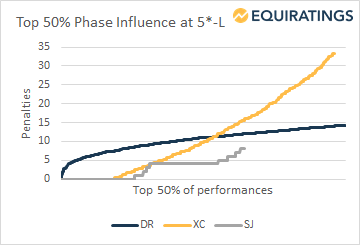 This is the level of the sport where cross-country matters. Notice the difference between dressage and show jumping though. The top 50% range in dressage is about 15 penalties from the best performer to the median performer. In show jumping, nearly half of the field that remain will score less than 8 penalties. 20% of starters in the show jumping will add zero penalties. The top 20% of dressage performers will be almost 10 penalties behind the leader. 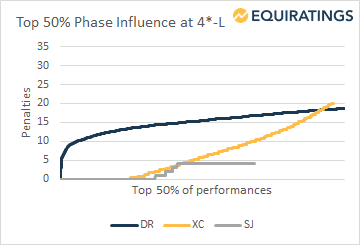 The most notable difference is the drop in cross-country penalties when assessing the median. Regarding the top performers and what influences winning, the dressage phase has already become dominant. With regards to show jumping, we are seeing even more clear rounds, and the median value is now only 4 penalties. Show jumping might be the final phase and leave a recency bias – but already its influence is clearly way below the other phases. 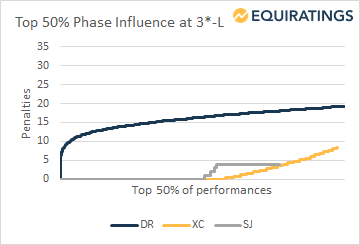 The percentage of competitors that pick-up zero penalties in both show jumping and cross-country is increasing noticeably. So much so that we don’t need statistics to point this out to us. We are entering the levels where a different ‘type’ of horse is preferred. Perhaps this is why show jumping feels so important, because more and more people jump clear. It adds pressure and non-clears feel expensive. But look at cross-country diminish. Are we really eventing at these levels? 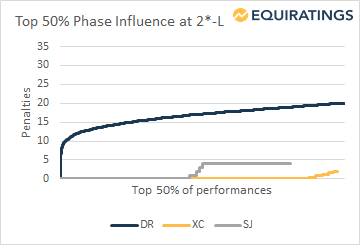 Where is the cross-country line? Most of the top 50% score zero so the impact of cross-country basically disappears. Hence the evolution of the phrase ‘dressage competition’. Again, show jumping feels important but it pales in comparison to dressage – however, the influence of show jumping notably overtakes that of cross-country in this class type. The problem for the sport is that this level has the highest volume.

This graph explains in one image why most young eventers spend hours trotting in circles and then blast dressage horses around the cross-country, picking-up zero penalties but not necessarily riding well. If the sport has a future then change should start here. This is not balance – this is domination. We can’t really lament the the art of cross-country disappearing if this is how the majority of the sport is weighted and influenced. If you want people to train a certain way or breed/produce a certain type of horse, then make the attributes matter.

What feels or what appears to be influential is susceptible to our flawed human perception at times. Ingrid Klimke lost the gold medal at WEG in the last second of the entire competition. It carries the most amount of recency bias. While her show jump cost her gold, don’t ignore the phenomenal advantage that she built up in the first phase. She still finished ahead of Andrew Hoy who scored above 70% in dressage and finished on it. In the international sport over the past five seasons, 58% of competitors have finished between 0 and 4 penalties in the show jumping. That is not a large amount of influence. Next time Ingrid does a low 20s, or even teens dressage, don’t expect 58% of the field to be within 4 penalties of her!