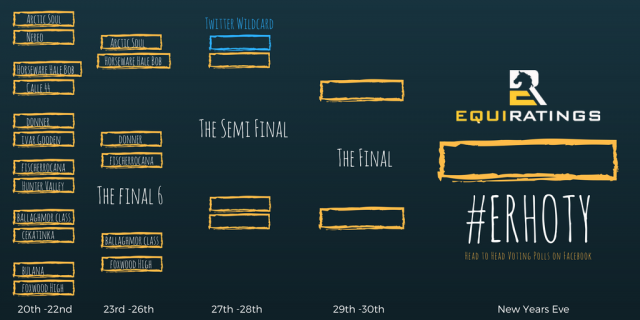 We still have two North American horses in the bracket for EquiRatings Horse of the Year!

Happy Christmas Eve, EN! We know it’s a busy day as you many of you are heading home for the holidays, fighting the crowds on last-minute shopping trips and wrapping presents in anticipation of Christmas Day tomorrow.

Round 2 of voting for EquiRatings Horse of the Year is also underway, and thanks to massive support from our North American eventing family, both the Donner Syndicate’s Donner and John and Judy Rumble’s Foxwood High have made it through to the next round.

Voting is super easy. Simply scroll down and click on the photos of Donner and Foxwood High in the polls below to cast your vote. You can also vote directly on the EquiRatings Facebook page.

There are three total rounds of voting currently taking place, and you can also cast a vote in the hotly contested battle between Arctic Soul and Horseware Hale Bob. Voting in Round 2 concludes Tuesday, December 26. Don’t wait — go vote now!