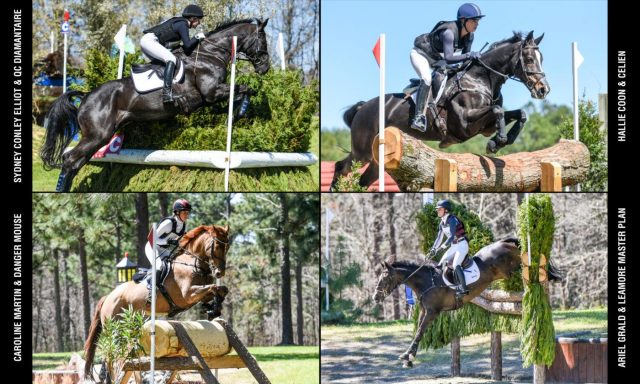 Established with the USET Foundation and administered by USEF, the North American Futures Team Challenge is designed to complement the Eventing High Performance Program, which recently rolled out the new U.S. Eventing Pathway Program. Two teams of four combinations, one coached by U.S. Eventing Director of High Performance Erik Duvander and one coached by USEF Eventing Emerging Athlete Coach Leslie Law, will participate in training and contest an unofficial simulated team competition at select events during the season.

At Carolina International, Erik Duvander’s team completed all four of their riders with clear cross country rounds, adding just 2.0 penalties to their winning team score of 98.2. Sydney Conley Elliott and Carol Stephens’ QC Diamantaire, the only pair on the team competing in the CCI3*-S, completed on their dressage score of 29.0 to finish third.

“Winning is obviously important because we tried to make it feel like a real competition, but in the end I am more pleased about how the whole thing rolled out,” Erik Duvander said.

“U.S. eventing athletes lack opportunities to ride as a team compared to most competitive countries within our sport. We hope this part of the program will, over the years, give our athletes a higher level of preparation before being selected for championships. This is only one aspect of areas of needed improvement, but I am pleased we are now ticking this box in a less expensive way compared to sending combinations to Europe for their first team experience.”

Erik and Leslie held debriefs with each other during each evening of the competition at Carolina, and they also spoke to the riders about their own experiences of competing on teams for Sweden and Great Britain, respectively.

“To fully replicate a championship is hard to do, but the athletes will have a greater understanding after this experience of the difference between riding as a team member and riding as an individual,” Erik said. “Riding for a team carries different expectations of the athletes, and we believe this team environment should be practiced for better team performances in the future.” 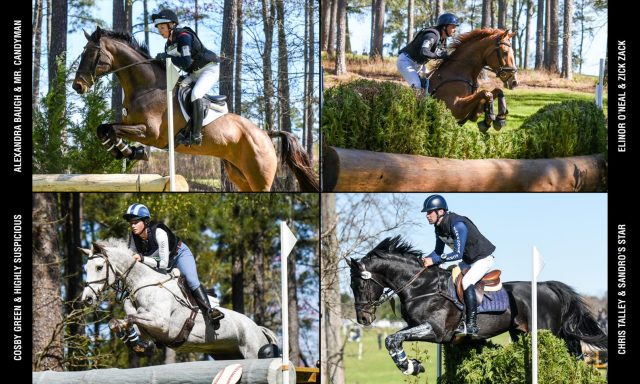 Leslie Law’s team led after dressage, and Erik Duvander’s team sneaking ahead in show jumping thanks to three of four team riders jumping clear rounds. An 8.0-penalty margin separated the teams going into cross country, but Leslie’s team ultimately had to carry a score with jumping penalties to complete on 130.5.

Alex Baugh and Altorac Farm’s Mr. Candyman led the way for Leslie’s team, completing on their dressage score of 32.7 for eighth place in the CCI3*-S. Ellie O’Neal and Sally Cox’s Zick Zack had two rails down and added 0.8 cross country time penalties to finish 13th on 38.8. Cosby Green and Edie and Clay Green’s Highly Suspicious had one rail down and added 20 jumping penalties on cross country at fence 4, the Attwood Mounds, to complete on 59.0 for 36th place. Chris Talley retired Sandro’s Star at the fence 13, the Cloud 11 Montrose Pool Aquarium, when the stallion looked very strong.

As for what the riders thought of the experience, Hallie Coon’s team had already delivered three clear cross country rounds before she set out of the start box with Celien, but she said she still wanted to deliver a fast round to practice riding under pressure.

“It was easing us into the team atmosphere, and it was a lot of bonding and thinking about our horses, which was really useful,” Hallie said. “I think it is really valuable to have this to really get to know each other and to learn how to be in communication with your team members. It was really great to build that camaraderie with people and see the way forward.”

Ellie O’Neal was the second rider out for her team, all of whom competed in the CCI3*-S, so she was able to bring back feedback and insight about the course. “It was really educational with a lot of helpful parts, like the talks about what was expected of you as a team member, how to handle different situations, and the difference between being on a team versus competing as an individual.”

Erik said the program will continue to evolve in order to best suit the needs of the U.S. Eventing High Performance Program. “Some athletes will naturally thrive in a team environment and others may have some areas that need improvement and experience. We need to use these team experiences to identify and develop the necessary skills and get the athletes accustomed to team routines and expectations.”

The next USEF/USET Foundation North American Futures Team Challenge will take place at the Mars Incorporated Bromont CCI3*-L on June 6-9 in Bromont, Quebec.

“Carolina International is one of our very good spring events in the U.S., and they were happy to help us run this unofficial team event this year,” Erik said. “Bromont was chosen because it is run by Sue Ockendon, their event director, and she is hoping to develop a team event at Bromont for North and South American teams in the future. Plus, Bromont is also an event away from home, bringing another aspect of experience to develop future team riders.”