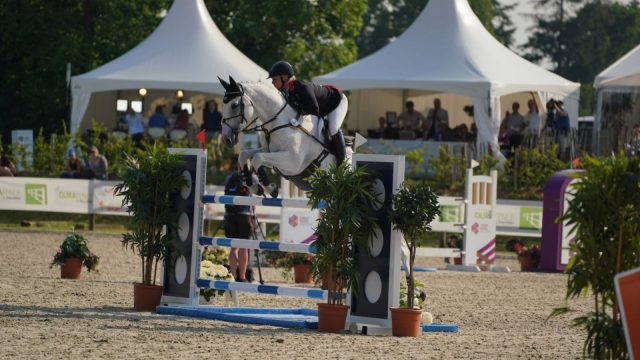 With only three scores dipping below 30, riders were fighting for every mark in the first phase of Leg 3 of the Event Rider Masters (ERM) series at Arville. 2017 ERM Champion Gemma Tattersall was the best of the bunch aboard the striking grey Quicklook V.

They earned a 28.8 in the mare’s first appearance at this level since suffering an injury at the 2017 European Championships, but Gemma said she felt the heat from judges Dr Ernst Topp, Dr Katrin Eichinger-Kniely, and Eric Lieby. “I don’t quite know what else they wanted. She felt better than she had at Bramham, where she scored a 21.6. She was light in the contact and she did beautiful changes.”

“She’s such a lovely horse, and it’s so lovely to have her back competing at this level — it’s really exciting. Sometimes, with her, it’s not all about making the time — she spends a lot of time in the air, and if I rush her, she can have a rail,” she said. “I knew I could take a stride out at the double, but then I was going to have to be careful. It was quite well thought out!” 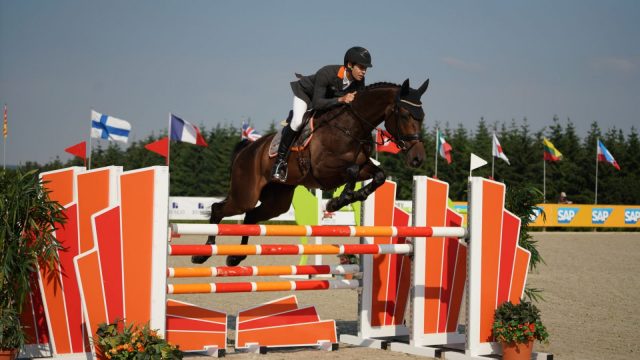 Chris Burton and Quality Purdey. Photo courtesy of ERM.Chris Burton was the big winner at Arville last year before going on to win the entire series, and he’ll certainly be one to watch in final phase aboard Quality Purdey, who sits second. The duo jumped clear to remain on their dressage score of 29.7.

“She was beautiful and relaxed, and I’ve got so much time for the mare. I’m very lucky to have the ride on her. It’s a good day for us,” he said. 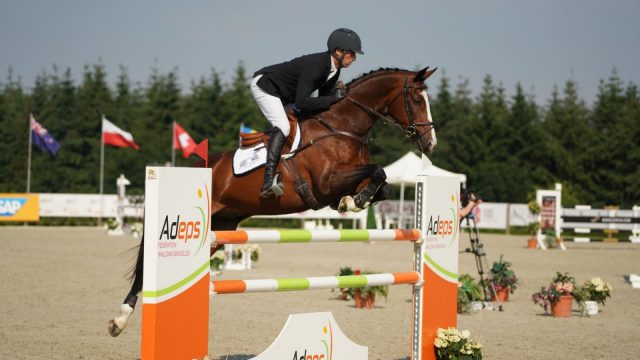 World Number One Tim Price is certainly among those still in the hunt here this weekend with the fan favorite, Wesko. A double clear performance moved them from fourth to third keeps on a score of 30.5.

“He’s a great jumper and I always look forward to that side of things with him,” said Tim. “They were the same two mistakes I made at Wiesbaden – I messed the trot up last time, and I did here too! Nine times out of ten, he comes really good in that phase. But I was really pleased with him today. I’ve made the odd mistake with him, but today he jumped his socks off.”

Of the 17 competitors, 7 jumped double clear today (41%). The pressure is on for the final cross country phase where riders can look forward to Rüdiger Schwarz’s “go kart” track. First rider leaves the box at  1 p.m. CEST/7 a.m. EST, and you can watch it all live here.