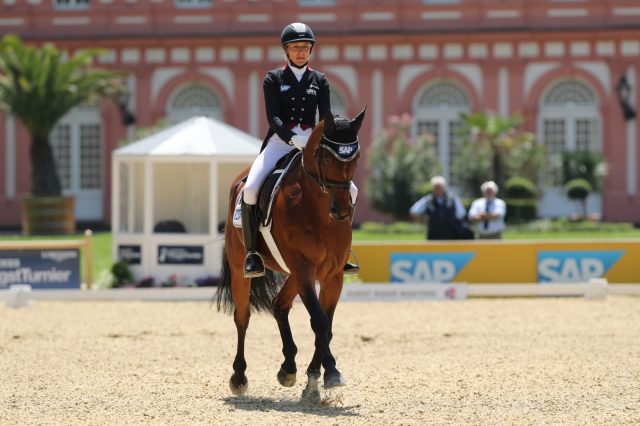 The second leg of the Event Rider Masters series shot off at a blistering pace today at Germany’s Longines PfingstTurnier Wiesbaden, beginning with an ERM record-breaking test by Ingrid Klimke. Germany’s defending ERM champion, aboard SAP Hale Bob OLD, posted an incredible 16.4 in the first phase to best the previous ERM dressage record of 20.5, set by Tom Carlile and Upsilon at Barbury Castle in 2017, by 4.1 marks.

Highly anticipated test from one of the world’s best combinations, Ingrid Klimke on SAP Hale Bob OLD. A PB for the pair who have now set an ERM dressage record, taking the lead with 16.4. 🎉 pic.twitter.com/6c7161lHE8

“He was coming in there like, ‘Here I am. I know my test in and out, so just enjoy it.’ I have known him for 10 years so we are so close, so I know him in and out,” Ingrid said. “Yesterday he was a little bit spooky and wild and pretending that maybe he could explode (in his test). But then today he came out like, ‘I know it’s dressage day. I will be calm and do everything you ask me to do.’ He’s so sweet.”

Their lead wasn’t to last, however, as three felled show jumping rails saw the pair relegated to 6th.

A devastating knock for Ingrid Klimke and SAP Hale Bob OLD who take 12 faults from their showjumping round. Julia, Michael and Bill top the leaderboard as we enter tomorrow’s final phase. pic.twitter.com/5YCKo4ExS8

Overtaking the top spot on the leaderboard was Germany’s Julia Krajewski and Samourai du Thot, who were second after dressage on a 21.0 before turning in a fault-free performance around the Christian Wiegand’s course.

“Now I can enter the ring and even though we was a little bit nervous outside, he comes in and it feels like a safe place now, so then I can really ride,” Julia said. “I’m very proud that he’s so consistent now. It’s quite cool to know that even if he might be a little bit nervous or something happens, he’s always with me.

“We’ve known each other for eight years now, so it’s a very long relationship. We know a little bit what the other likes and doesn’t like. He hates when I wash his head. Even though he’s small, he just takes it high enough that I can’t reach him, and he knows I can’t reach him because when someone bigger wants to do it, it’s no problem.”

Jumping like a cat, an exemplary clear round from Samurai Du Thot and Julia Krajewski who defends her podium position.

Although not officially confirmed, EN has been informed that Julia will be withdrawing Samourai du Thot prior to cross country tomorrow. 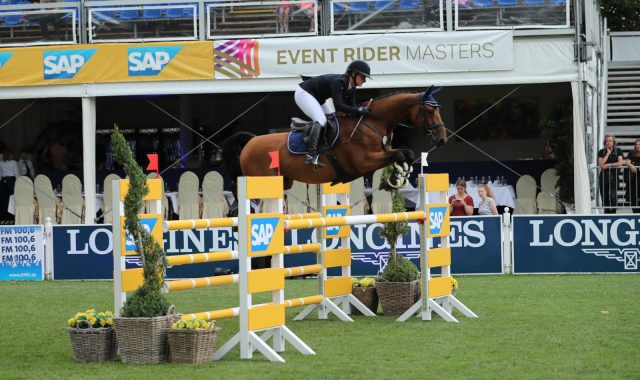 Germany’s Michael Jung and Star Connection sit second, having delivered the fastest clear show jumping round to remain on their dressage score of 22.2. Star Connection has been making a comeback following injury and last competed at the level at Jardy in 2017 when he won the ERM leg.

“He’s a bit spooky. He’s also a bit sensitive with other horses; he’s a bit shy,” Michael said. “This was a difficult test for him. It’s quite a big atmosphere for him. I’m very happy to have him back. He’s such a beautiful horse. He’s so comfortable to sit and ride, and he always concentrates and has nice movements. It’s really nice to ride him.” 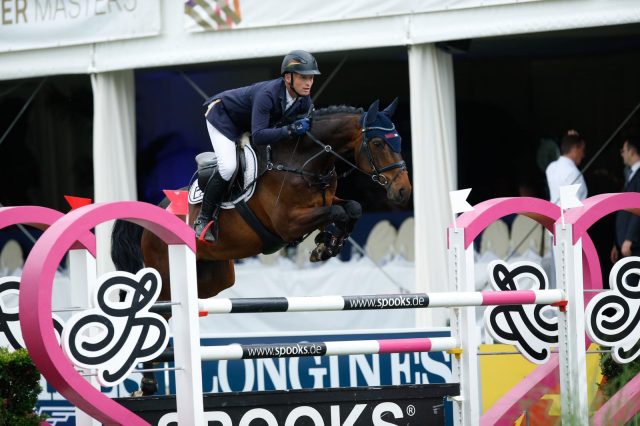 Australia’s Bill Levett and Shannondale Titan round out the top three, adding 0.8 time penalties to move from 6th after dressage into podium contention on an overnight score of 26.8.

“We’ve been around a lot now with him and we know the right set up (for dressage),” Bill said. “If you give him too much (warm-up) he gets tired, so he just needs a good school about three hours before his test, and then he only needs about 10 minutes before the test and then you take him in, because he knows all the stuff.”

“It’s all about the show jumping (at Wiesbaden). You have to jump clear there to stay in contention. On cross country, my guy isn’t the fastest, but he’s genuine, and this track will suit him. Out of all the legs, this is the one that suits him the best.” 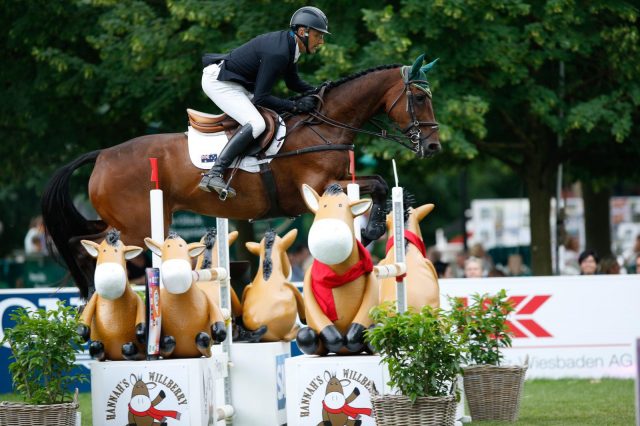 Six of the 15 combinations (40%) jumped clear show jumping rounds inside the time allowed of 83 seconds. Among those combinations were the U.S.’s Liz Halliday-Sharp and Fernhill By Night, who sat 10th after dressage on a score of 29.2 then moved into 8th on the wings of their clear round.

Germany’s Andreas Ostholt and 19-year-old Pennsylvania 28 moved from seventh to fourth with a clear round to remain on 27.4. Australia’s Chris Burton and Lawtown Chloe also jumped clear and inside the time to remain on their dressage score of 28.3, which moved them from eighth up to fifth place after show jumping.

The field will tackle Rüdiger Schwarz’s challenging cross country track amidst the backdrop of the stunning Biebrich Palace on Saturday beginning at 3:20 p.m. CEST (9:20 a.m. EST) — view cross country times here. Check out a preview of the cross country course via CrossCountryApp here. 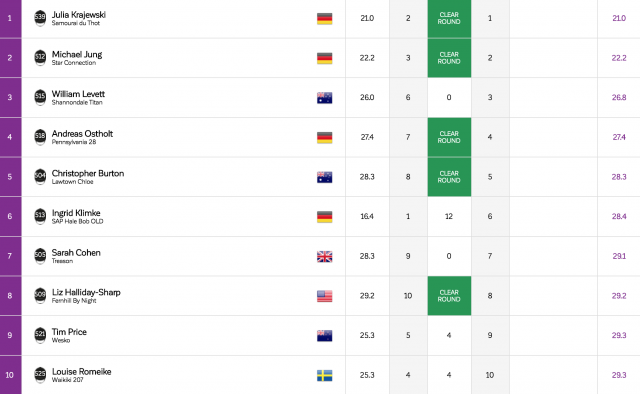