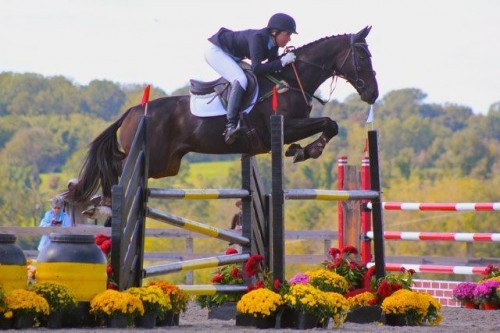 Meghan & Pirate in the CIC3* at Plantation

Meghan O’Donoghue and her little pocket rocket of an OTTB, Pirate, didn’t have a bad year in 2012. They completed their first two seasons at the Advanced level together, jumped double clean around the Jersey CIC3* for 7th place, won the $10,000 Intermediate Challenge at Surefire HT in the summer, completed two more CIC3*’s at Richland and Plantation in the fall, and finished with a clear run around Fair Hill CCI3*, for their first attempt at that level.

They topped off an amazing year at the Advanced and 3* level by being chosen as the recipients of the $10,000 Essex Grant at the 2012 USEA Convention. The Essex Grant, created in memory of the Essex Horse Trials, is given to riders 25 and under, and is intended to assist the recipient in developing the essential skills required for a successful transition from the Young Riders’ ranks into the senior rider ranks.

However, Meghan didn’t always know that Pirate would be her partner at these top levels; in fact she wasn’t even seeking a horse when he came into her life.  In 2005, while along for the ride to look at horses at the track with her mother, Meghan happened to see a scrawny little three-year-old bay gelding that the grooms were using to pony the real racehorses around the barn. He was wearing a giant western saddle, and they were cantering him around showing off his ability to do lead changes. “There was just something about him that I really liked,” says Meghan, “I positively begged my mom to let me buy him, but she said absolutely not, so we went home empty handed.” 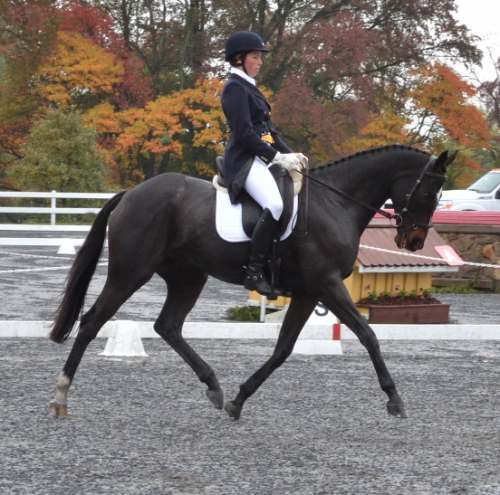 Meghan spent the next six weeks begging her parents on a daily basis for this non-de-script bay gelding, until the day when the trainer called to tell them that the horse their daughter was so taken with was slow as dirt, and needed to leave as soon as possible. Meghan prevailed upon her mother, and they brought him home. He had been off the track for about four months when family friend and mentor Jan Byyny came to their farm for a clinic, and saw him under saddle.

“Jan rode him a little bit, and liked what she felt, so she offered my parents some money. They asked me, and I said, sure thing, he’s just four, who knows what he’ll be, and I could use the money to do some more events with my Preliminary horse,” Meghan said, “My dad was the one who put his foot down, and he said the horse wasn’t for sale, so that was that.” The choice was a good one, as Meghan’s main horse had a career-ending injury shortly after that, and Pirate was the immediate replacement. She competed him in a handful of Beginner Novice and Novice events that fall.

As the seasons went by, Meghan and Pirate kept easily moving up the levels. Pirate surprised her every year by easily coping with whatever challenge was presented. However, their career was not without the usual setbacks. In 2009, they placed 2nd at the CIC2* at Poplar Place and completed the CIC2* at Chattahoochee Hills the following spring in preparation for NAJYRC. However, poorly timed stone bruise meant that they went all the way to Kentucky but were unable to present at the first jogs. They decided to tackle the CCI2* at Fair Hill, but Meghan said that her inexperience at the level and the poor footing contributed to an early fall for her on course. They had to re-route to Jersey CCI2* the next spring, and consequently moved up to Advanced at Morven HT that fall.

2012 was their first true year at the Advanced level, and throughout the season, the pair seemed to get better and better, until they were considered a sure thing for a double clear all around. The two completed three CIC3* without jump penalties, and finished Fair Hill CCI3* in 12th place with only a rail and some time to add to their dressage score. 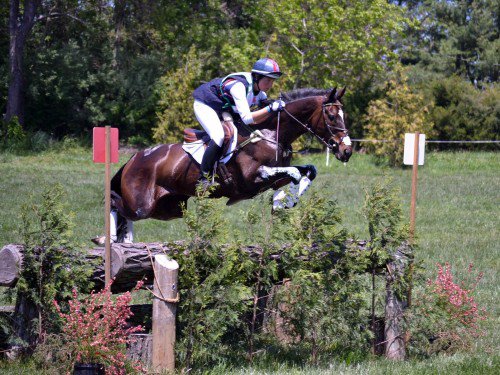 Meghan just moved home to Carbondale, Illinois, after spending the past two and a half years working as assistant trainer to Jan Byyny, whom she credits with most of her success. “I have such a big support system here, and I really wanted to come home and be with my family, my long-term boyfriend and my friends and supporters,” explains Meghan, “I’d like to make Illinois my home base for the long term, and maybe make limited trips to the east coast to get extra training before big competitions.”

Also named to the Under 25’s Training List, Meghan and Pirate will be traveling to Aiken for two months this year to participate in some training with new Chef D’Equipe David O’Connor, as well as to fill in as assistant trainer for Will Coleman, while Alexa Perkiel recovers from a bad tumble at Virginia HT in the fall.

“I’m going to feel it out from Aiken onwards, but I’d like to spend another solid year at the Advanced level, and do at least one more CCI3*. Pirate owes me nothing from this point forward, but the dream is to see if we can get to Rolex next year,” says Meghan, “He’s an incredible horse, he works hard and tries his heart out every time you get on him. He can always get better in the dressage, but he doesn’t know how to touch rails, and he’s brilliant cross country. I’m excited for the future with him.”