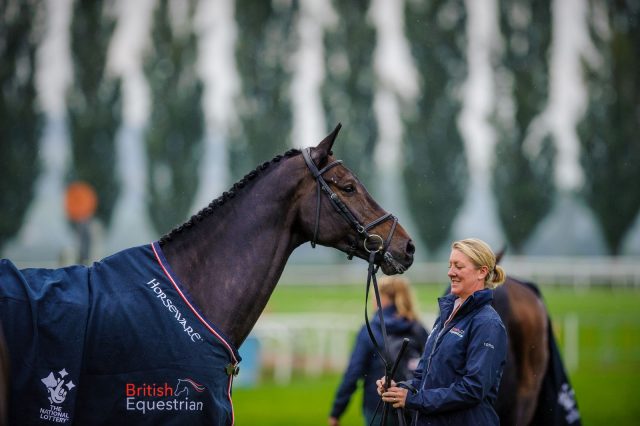 Overnight leaders Nicolas Wilson and JL Dublin remain in the hunt and will showjump this afternoon. Photo by Tilly Berendt.

After a week of dazzling sunshine, this morning’s gloom and drizzle seemed a grim omen ahead of the final horse inspection, held in front of a packed grandstand and officiated over the ground jury of Andrew Bennie (NZL), Christian Landolt (SUI), and Christian Steiner (AUT). And certainly, it wasn’t all plain sailing for the 57 assembled horses and riders, who tackled a tough, twisting track yesterday that evidently took a toll on a handful of competitors. 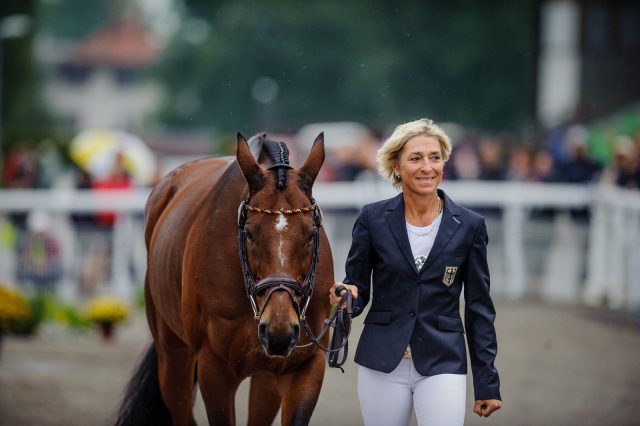 Second-placed Ingrid Klimke and SAP Hale Bob OLD are accepted and will continue their fight for a third consecutive European title. Photo by Tilly Berendt.

Both the team and individual podiums remain intact, with Great Britain fighting for both the team and individual gold after Nicola Wilson and JL Dublin took over the top spot with their faultless round yesterday, while Germany sits in silver medal position on both podiums too, as reigning champions Ingrid Klimke and SAP Hale Bob OLD aim for a hat trick of wins, which would make the seventeen-year-old gelding the first horse to win the championship on three occasions. And in bronze? That’s France on both counts, with Maxime Livio bolstering his nation’s hopes with the smart eleven-year-old Api du Libaire, edging the Swiss team into fourth place overnight. 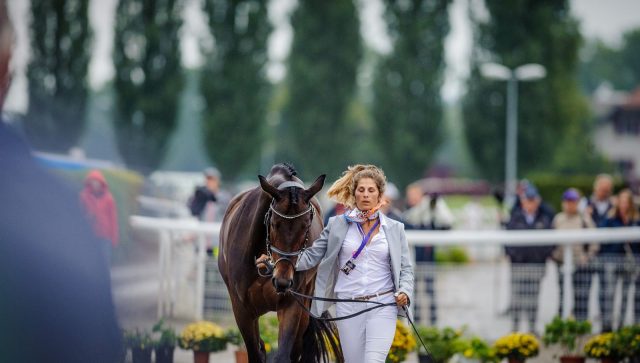 Julia Schmitz and Lady Like are among the spun pairs in the final inspection. Photo by Tilly Berendt.

Several teams find themselves out of contention entirely after losing multiple members of their team prior to showjumping. Belgium is down to just Karin Donckers and Leipheimer van’t Verahof and Kris Vervaecke and Guantanamo van Alsingen after both Lara de Liedekerke-Meier and Ducati d’Arville and Julia Schmitz and Lady Like were sent to the holding box. Lara opted not to represent, while Julia and Lady Like represented but were subsequently spun. 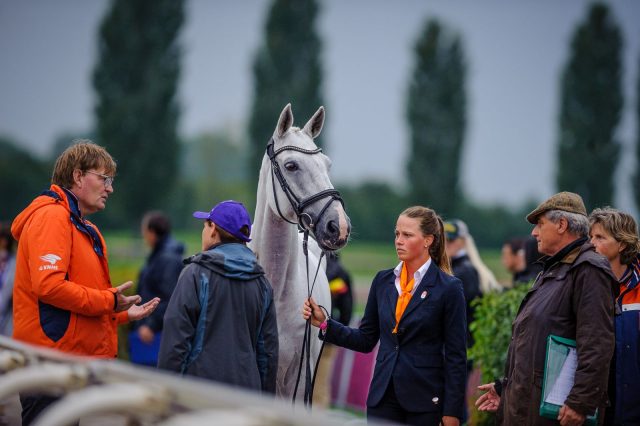 It was a similar story for the Dutch team, whose trailblazer Jordy Wilken withdrew Burry Spirit before the inspection. Janneke Boonzaaijer‘s Tokyo mount ACSI Champ de Tailleur was also spun, leaving just Merel Blom and The Quizmaster to compete for the Netherlands after Sanne de Jong‘s elimination for technically missing a fence yesterday.

Russia, too, is down a rider after Albert Khalikov and Argolis Tokyo were spun, and sole Finnish competitor Sanna Siltakorpi withdrew Bofey Click overnight after their impressive two-phase performance put them in the top twenty.

The entirety of the top ten remains intact following the final horse inspection, and will go ahead to this afternoon’s final showjumping session with just a pole separating the top seven. Here’s how they stack up at the moment:

The top ten after a dramatic cross-country phase at the FEI European Eventing Championships.