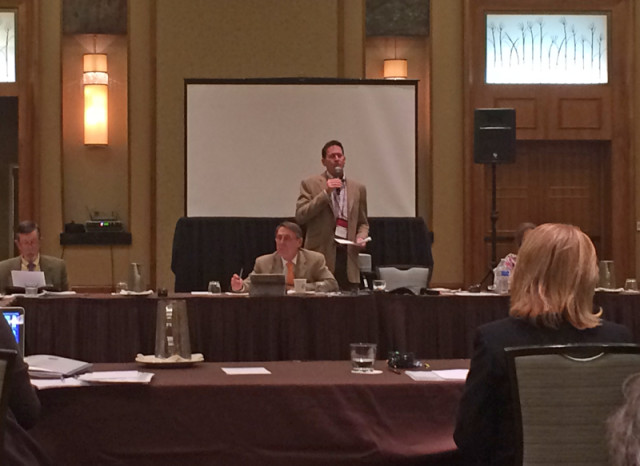 We’re live from day one at the USEA Annual Meeting & Convention in Fort Worth, Texas, and the biggest issue on tap this week is by far the proposed rule change to EV149 and adjustments to the wording in the Levels of Horse Trials appendix, which have caused quite a stir since being announced. Click here to review our coverage of the issue so far.

The USEF Eventing Technical Committee discussed the rule change proposal in its closed meeting this morning, and the public and media were then invited in to the open forum for discussion. The Eventing Course Designers and Builders Committee has been working on a new draft of the rule since a number of USEA members raised concerns about the proposal.

We don’t yet have a finalized version of the updated rule change proposal. Here’s what’s happening so far. The Membership Committee will discuss the updated proposal in its round table later this morning, and the Rule Change Forum is scheduled for Saturday. It’s likely at this point that the new draft of the proposal will not be acted on until the committee next meets in January. Malcolm Hook said, “There will be ample time for member comment if that’s the case.”

With that in mind, here are the changes that are currently in the works in the latest draft of the EV140 rule change proposal:

The current draft does not propose height and width increases at the Beginner Novice and Novice levels, and increases at the Training and Preliminary levels would only occur at Training Three-Days and championships at those levels.

The changes to cross country in the Levels of Horse Trials appendix in its current draft form were also discussed. Here’s what the new draft looks like right now:

Beginner Novice: Cross country should include “a variety of obstacles” and can include combinations on a two-stride line and a bending line; a water crossing with an obstacle before or after the water; and individual fences including brush, oxer, and a step up and step down. To clarify, that’s not saying what must be on courses but what can be on the courses, which applies to the changes at Novice and Training too.

Novice: Cross country can include obstacles on two-stride line, as well as offset obstacles; obstacles before water and after but not a step out; and individual fences including a trakehner, corner and double brush. The biggest adjustment is the committee eliminated the jump into water and the step out of water in this most recent draft.

Training: Cross country should include “questions that are becoming more sophisticated in nature while remaining inviting.” This can include a one-stride line, jump into water (obstacle or log drop) and a jump out of water (an obstacle or step). Individual obstacles can include a jump from water to water provided that it’s not a jump into or out of water, as well as ditch and brush or ditch and wall.

Again, I have to stress that all of the above is what appears in the most recent draft of the rule change proposal and changes to the Levels of Horse Trials appendix and does not reflect the final version of the proposal that will go forward for voting. The proposal will likely continue to change and evolve as we continue to go through the weekend.

What do you think of the most recent changes in this draft? Weigh in with your comments below, and be sure to keep it locked on EN all weekend as we follow the rule change proposal.