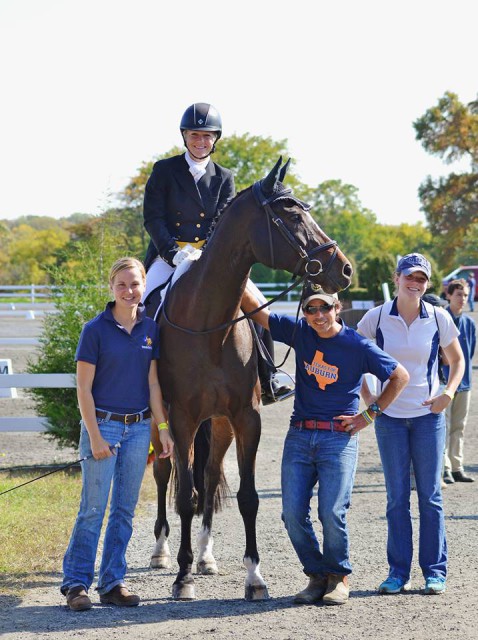 Being a professional in the equine industry is tough enough as it is, but what happens when you put a married couple into the mix? Fortunately, Dom and Jimmie Schramm have come up with a formula for success that allows them to balance their work and their personal life. We delved a bit more into their lives as eventing professionals, and we got some great advice and insight into their lives. Enjoy!

EN: What’s the best part about working together?

EN: What’s the hardest part about working together?

Jimmie: It’s hard being around each other 24/7, as well. I think the hardest thing about working together is that I annoy Dom a lot sometimes! And so we kind of go through spells when I’m really annoying him and he’s really annoying me and the poor girls who work for us have to deal with us.

EN: Any traditions you try to keep?

Dom: We have a funny tradition, which was started by our groom Stephanie. Every year we have these crazy calendars that we put in the barn. So like specific dates with the horses and shows. The first year we did it, it was a squirrel calendar, this year it was hand art, so people’s hands painted like art. We’re working on next year’s, but it’s going to be pretty funny, and it keeps us entertained.

Jimmie: Every year we go to Dallas to see my family over the holidays, and we always make sure to go shoot sporting clays around Thanksgiving. There’s stuff that we like to do together that’s non horsey, and that’s a good balance.

EN: Do you have a favorite vacation spot?

Dom: We’ve been together almost six years and just went on our first proper grown up holiday to Australia. We don’t have a lot of experience in that department, but we do like the beach. Hot or cold — we would always somewhere warm. I guess that’s the Texas and Australia in us! As long as we’re with our family, we’re pretty happy. 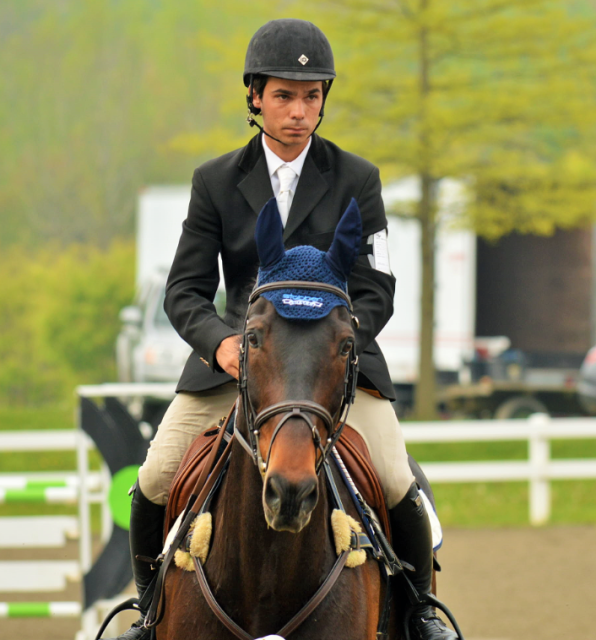 EN: Do you have any pre-event rituals or superstitions?

Jimmie: This past year I came to the realization that all of my things that I thought were lucky are in fact not. I finally have come to the conclusion that there’s no such thing, or it doesn’t work for me, anyway. I used to be very particular about which socks I wore each day at an event, the correct belt — that sort of thing. It clearly didn’t make a difference.

I used to have this thing where on cross country course walks, I would physically go over every single jump, I thought to myself, “If I can plop over it, hopefully my horse can get over it!” I did that all the way up to Intermediate; I might want to pick that back up!

Dom: If anyone’s seen my fashion sense, there’s pretty much no rhyme or reason to what I wear when I wake up.

EN: Tell us about your first horse or pony.

Jimmie: My very first pony was a 14.2-hand Quarter Horse named Ginger, and my mother and I were the ones who did this since my dad said not to get me one and she did anyway.

We didn’t know anything about anything — didn’t vet her, and my mom always says she bought her because of her eyes; that’s the kind of person my mother is. She was 4, I was 9, so you can only imagine how that went.

I felt so bad; I was was jumping her that week. It was just a disaster, but it was a healthy little baby, and we kept him until he was a year and sold him, but it was a fun little project. So literally we got two for the price of one!

Dom: I had a couple, but the first one I really got going with was a 13-hand pony called Piping Pedro. I’m not a very big guy, but when I was a kid, especially like 6 and 7, I was extremely small for my age.

This pony was quite strong willed, and in the 18 months I rode him, I had over 400 falls — and that is actually no exaggeration, you can call my mother and ask her. He had this trick when he would just try and bolt and run really fast, and in one second go from a flat gallop to head down eating grass. I would just catapult 40 yards over his head.

This happened every single day for over a year. So I guess that was probably where the seed was planted for me of not being scared to get on any horse since I know the worst that can happen is you can fall off ± no big deal. He turned out actually to be quite good, but he definitely taught me that every time you fall off to just get back on.

EN: What would you say your strengths and weaknesses are as riders?

Dom: I analyzed a lot of young Australian kids that got into the sport. I think the cross country has always played to my strengths as a person. Not to say I haven’t had my share of mistakes, but I like going fast, I enjoy the challenge of it, so it’s always been the phase I’ve had the most success with.

For me as far as weaknesses, I think the anxiety in the show jumping has always been a big thing for me. I’ve never really gone through a period in my career where I’ve spent a lot time doing just show jumping, so most of my experience is doing it as the last phase with lots of pressure, so it feels like a pressure cooker. So I’m working on making that less of an issue.

Jimmie: I think as far as my weaknesses go, I think what I have a problem with is I struggle to slow my thinking down when I’m riding. When I come to a combination, I struggle not to make everything happen too fast; instead, I would rather slow down and accept the situation underneath me. I have a bit of a panic, and that’s something I’ll learn and get better from.

For strengths, I think now I’ve grown to be a bit more confident in the dressage ring. I’m not as nervous going in, and I can handle a warm up a bit better, especially if my horse is being a bit rambunctious. I can keep it together and pull a test out, whereas before I was not able to do that.

EN: Who would you say was a big early influence in your riding and the path you chose to take?

Dom: Probably the first person to really shape my eventing career was Chris Burton. I was a working student/rider for him for a couple of years, and I think he influenced me the most on learning about the sport from a professional standpoint and helped me learn who I wanted to be.

Jimmie: I think the person who influenced me is Chrissy Kenyon; we’re still very good friends. She started teaching me when I was probably 12 or 13, and she’s someone that was with me for a long time. She’s still involved — someone to bounce ideas off of — that sort of thing. I’d consider her to be a great friend now, and she always tells me how it is and tells me when I’m doing something wrong and steers me in the right direction. 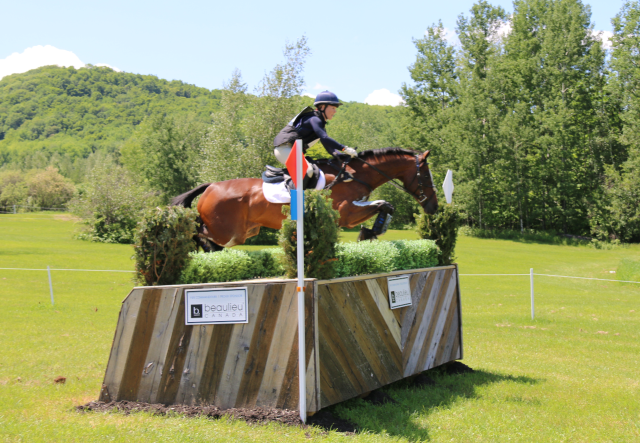 Jimmie Schramm and Bellamy at Bromont. Photo by Leslie Wylie.

EN: What’s the best piece of advice you’ve ever been given?

Dom: I have two; one kind of relates more directly to the training of horses. That is, sweaty saddle cloths make good horses. Basically, that means that the majority of training issues that you’ll ever encounter can be traced back to work or repetition or chipping away at them.

Second, it’s not just about being a good rider; it takes a lot of other things. You need to have to have a good business, be good with people, be smart and come up with new ideas. I’ve always remembered that.

Jimmie: I think for riding, the one I’ll pick — because there’s lots of gems — is always remember your line over your distance, especially on cross country. I pick that one mainly because it’s been very influential to me this year. That would be my token favorite.

EN: What advice would you give to someone who’s just starting out or struggling with their riding?

Dom: Going back to what I said about not being just a good rider — something that has served us quite well is trying to not only play to your strengths and also realize you don’t always have to do everything the exact same as everyone else has always done.

One of the great things about horses is it is traditional but at the same time, in the era we’re living in now, there’s so much uncharted territory. Not only do you get advice and do the things that work, but you also aren’t afraid to be your own person and have a go and try something new.

Jimmie: For a person who’s struggling, my biggest piece of advice, and it’s one I have to tell myself often, is to not to get trapped inside your own head.

I think that belief system and the way you think about things can really shape how you ride and how much you believe in yourself and your horse. It’s really important, especially if you’re having an issue you’re trying to work through.

Staying positive is really the best key to your success, and remember not to beat yourself up too much, because that’s something I do often. Keeping your frame of mind in the right place is really important.