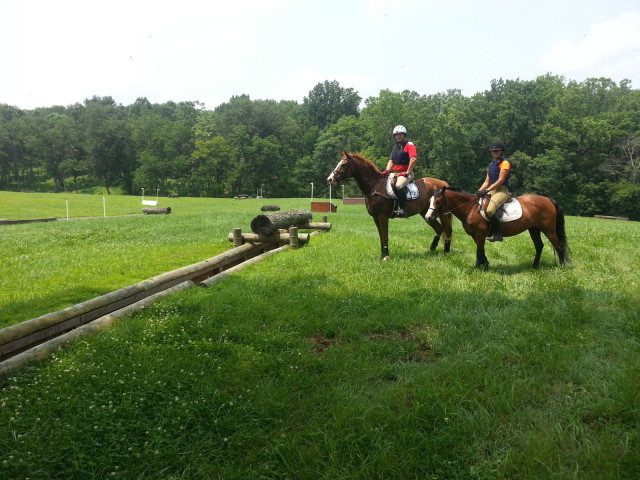 Myself and Sue's Reputation schooling at Liberty Farm.

Many professionals have learned this lesson multiple times. This past week, it was my turn for a lesson in horses and eventing. But let’s rewind back a little bit and give you some of the back story. Me and my horse, Beans, have been on a roll for the past year. We only had our first recognized horse trials last summer at Surefire, where we debuted at Beginner Novice.

After that awesome first outing, we have been on an adrenaline bender that even the harsh winter of the mid-Atlantic could not slow down. Last month, Beans and I earned our last NQR at Training to go Preliminary. Planning to make the jump to Prelim in the very near future, we put our nose to the grind stone and got hard to work perfecting our stadium and dressage.

I set a very ambitious goal for myself. I wanted to qualify and attend the Virginia CCI1* at the Virginia Horse Center in October. This goal did not leave myself or Beans much room for error, especially when working around my wife’s dressage business and horse shows as well. Our first step in meeting that goal would be attending the Maryland Horse Trials II on July 18 and knocking out our first Prelim.

As I am a bit of a day dreamer, thoughts of qualifying for the one-star in our first four Prelimss became a false reality. So much so I bought two new men’s fashion suits for my first time down the evening runway. Some sort of delusion of me prancing down the jog with “I’m Too Sexy” by Right Said Fred playing over the speakers — or maybe it was “Can’t Touch This” by MC Hammer.

As my dreams kept my mind in a euphoric state, add to that being chosen by EN to win the latest Blogger Contest, I was on top of the metaphoric eventing world. Then life pumps the brakes and lets you know you’re still human and dealing with a living horse.

My farrier came out last Tuesday, and what he found in Beans’ left front foot brought my early 90’s music montage to a screeching halt, kind of like MC Hammer’s career in the mid-90s. Now this issue does not have the death sentence of Mr. Hammer’s music career, and Beans will be fine in time, but it hit the gut hard and with a flood of emotion.

My farrier described the hoof problem to me this way: She has a malady of the hoof caused by moisture that undermined the structural integrity of the hoof wall. It in theory is similar to white line disease, but at the same time different. Treatment is also similar, where you must treat the underlying bacteria, fungus and microbes. In doing this, a portion of the hoof wall must be removed to allow oxygen and treatment to be applied. 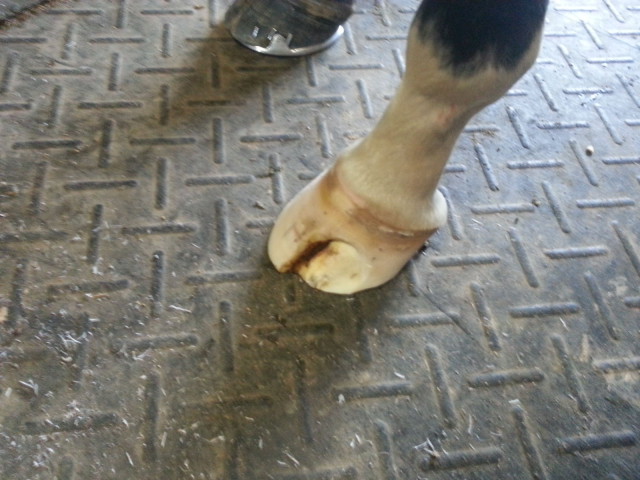 Bean’s foot after being resected prior to treatment.

Beans was not keen to the treatment and showed some discomfort, which resulted in stall rest. All I could process was: There goes my season. There goes my Prelim debut. There goes half my paycheck in show entry fees I can’t get back.

I sulked around the farm for the next few days, trying to grasp this first real let down of my eventing career. Because not only does this seemingly small hoof issue affect me going Prelim in the month of July, but it pretty much negates my one-star chances in 2015. To help me deal with this sad puppy dog emotional downturn, a good friend of mine at the farm invited me to lunch.

During our lunch, after explaining to her my woes, Sammy offered me something completely unselfish that mystified me. She offered me a ride on Rep, her 10-year-old Thoroughbred gelding. I thanked her and kind of brushed it off as a kind gesture and finished our lunch. When I got back to my office, the reality of what she offered me settled in.

Sammy offered me a ride on the horse she has not shown recognized in about two years. She offered me the opportunity to be the first person to take him around a cross country course since a major eye surgery this past winter. But most of all, she offered me trust and compassion to help me get through — that and not lose all those dollars in entry fees.

I then printed out the paperwork, emailed the secretary and got all my ducks in a row to change my entry to another horse at a lower level. I walked into Sammy’s barn with a sheepish grin and asked if she was serious in her offer. As she laughed at me and said yes, I handed her the entry to sign.

That got me thinking: This is why I love this sport. We are all family, and we are all in the same boat together. We come together to help one another out in times of need — some more serious than others, but a sense of true compassion exudes from all of us at the right times.

I took Rep out this weekend for a cross country school as my first ride on him, and I fell off at the second jump. I laughed as I slid down the face of the jump like a Tom and Jerry cartoon. I smiled as I got back on because I have a new goal for the time being, and I can’t wait to take this horse to his first event since 2013.

Go Eventing … even when it’s not the original plan.