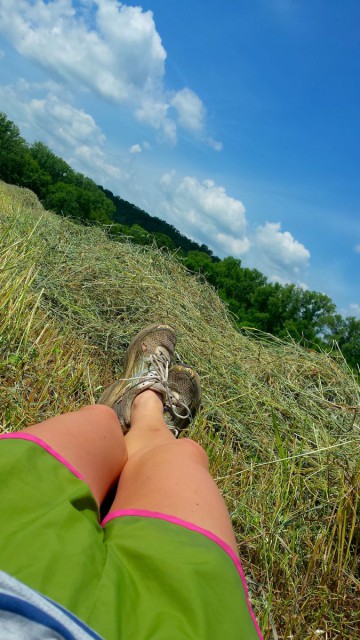 Waiting for the tractor to come pick me up.

Tis the season: that time of year when the weatherman predicts four or five dry days in a row and, in a flurry of activity, I’m cross-referencing about six other weather sites while my husband greases the cutter and runs out to buy extra twine.

Haying season. Baling season. Don’t-get-in-the-house-til-11-pm-hope-you-premade-dinner season. Between the two farms we own and three fields we rent, the hubby and I run about 60+ acres of hay.

Most of it in small squares that need a good deal of TLC to make it into the hayloft in a timely manner, stacked nicely and awaiting that dreaded “s”-word come winter. 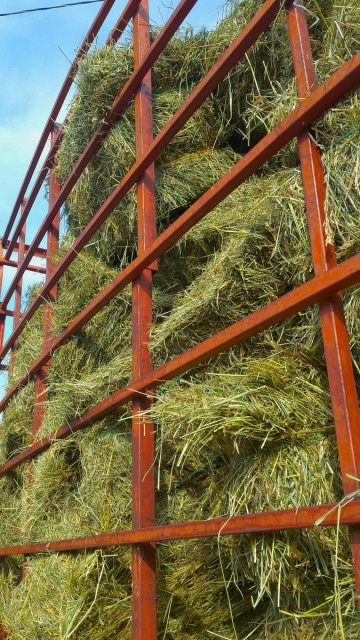 Hundreds of square meals, ready to be packed away in the hayloft!

Over the years I’ve become more hay-season savvy. Every year we put hay down and, without fail, my husband panics the next day, convinced the hay isn’t going to dry in time, or there might be a rainstorm — which is when I encourage him to do a little day-drinkin’ and try to pull him off the ledge.

Inevitably, the day after that the hay is dry and ready or nearly-ready to bale and he begins breathing normally again (well, at least until something breaks on the tractor or baler). 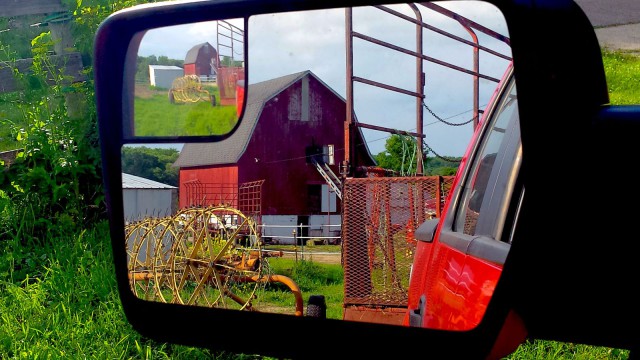 Apart from the inevitable stacking in the end, my jobs are usually tedding and raking. For the uninitiated, tedding means flipping/flinging/throwing the hay around with a machine to spread it back on the field for further drying.

We recently purchased a tedder, which has cut down on hubby’s stroke-like symptoms, as it can cut an entire day off drying time of a hay field. When he brought it home, he informed me that it’s an Italian design, and was thus dubbed (by yours truly) to be the ‘Italian Eggbeater’. 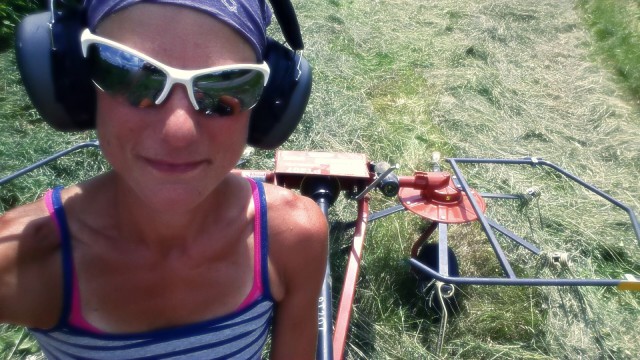 The ‘Italian Eggbeater’ and I are up to some serious hay-flinging!

Tedding is the best job EVER, because there’s no pressure to do anything in straight lines, make even rows, or even drive in any particular pattern. It’s the perfect job for an ADD-afflicted eventer like myself.

I love taking ‘my’ tractor, an Allis WD narrow front named Flash Gordon, down the road and spending an afternoon or evening in the field with some good tunes on my headset, flinging hay around to my heart’s content. 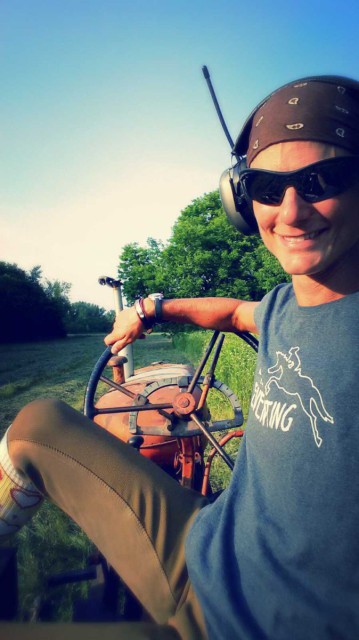 Flash Gordon and me! Dressed perfectly appropriately for tractor-driving in breeches and a Walker Farms Eventing tee.

Typically Flash and I will also help rake hay, and during baling my job is to drive hay racks from farm to field and back again, in a slow, one-woman parade down our country road with trucks, tractors and wagons.

Most of the work, from cutting all the way to stacking in the hay mow, is done solely by my husband and I, though sometimes we rope unsuspecting neighbors and friends into helping by promising things like ice cream or beer when we’re through. 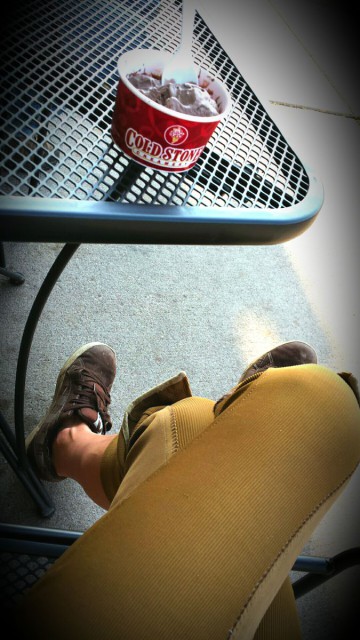 And at the end of it all? The rewards, in addition to a full hay mow, bulging biceps and an awesome tan, is a field absolutely MADE for galloping. Give me a mare who can’t wait to hit 650 mpm and a smooth, freshly cut track and I’m in heaven. 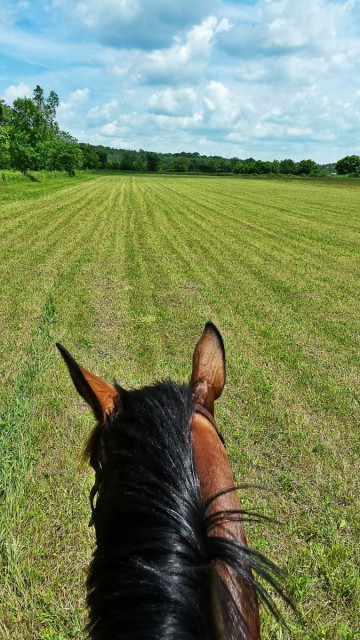