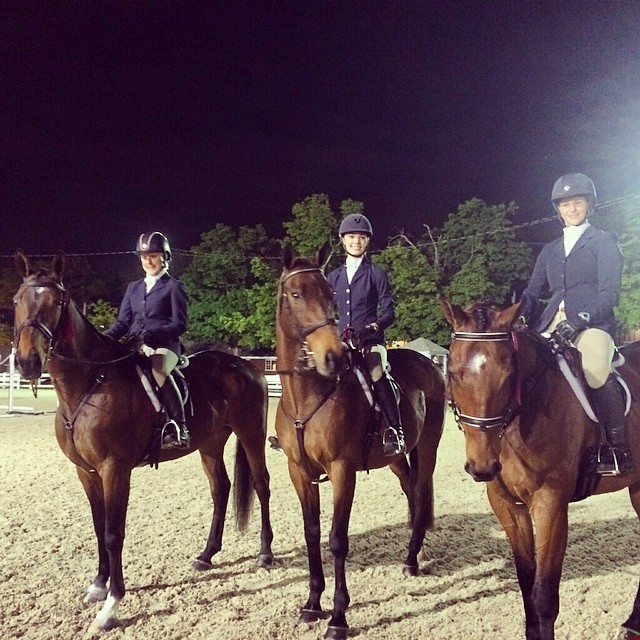 Last year, we posted Bryce Weber’s recap of Hunt Night at the Devon Horse Show. This year, we’re pleased to announce that a team of event riders once again took on the hunters, placing second out of 16 teams in a hotly contested class. Justine Dutton took two of her students and three event horses to Hunt Night this year and thoroughly enjoyed her experience.

Justine and her Preliminary mare, Jollybo, competed alongside students Tori Hain and her own Chaser and Katie Bibeau with Hillary Moses’ Madox, making up Team Sport Ponies UK. “I’ve ridden at Hunt Night two or three times, and the girls really wanted to go,” Justine said. The team managed to squeeze in the short trip to Devon in between competition at Flora Lea that weekend. “Jollybo actually ran the Prelim the morning of Devon, but she is fit enough to be able to go around one course that night,” Justine said. 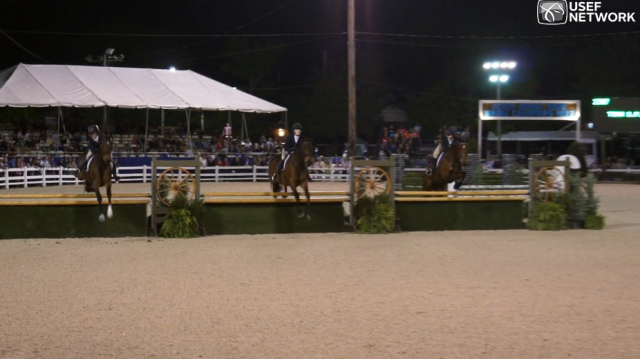 The experience was a new one for all three horses, two of which had only come over from England last year and one which is a former Young Rider horse. “It was a lot of atmosphere, as there were so many people watching, and the class was held under the lights. Our horses were fine until everyone started screaming and cheering, but overall, they handled it quite well.”

What about preparation for this different type of competition? “We practiced twice at home, and since the warm-up was pandemonium, we went over to a different warm-up ring to canter around and get our spacing down, but that was about it,” Justine said. “We set a pretty fast pace on course, as many teams were too slow and their horses got too backed off to the fences, which caused a lot of stops.”

Although Team Sport Ponies UK was outfitted in hunter attire, the girls still couldn’t resist adding a bit of eventer flair to their ensembles; they threaded red and white yarn into their horses’ braids and put glitter on their quarter marks to add a bit of glitz and glamour to their outfits. “It’s always fun to be an eventer and be able to show up and compete in a hunter class,” Justine said. “It’s a great place to be seen, as there are so many spectators as well as current and potential clients who attend the event, so it was a great opportunity.”