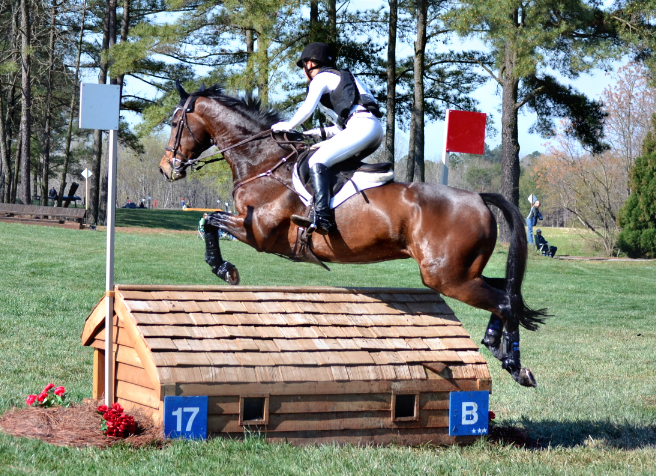 Elinor MacPhail had come to terms with her disappointment upon reading the 2015 Eventing 25 list and realizing her name had not been included. Soon after, however, she received an email letting her know that her application had ended up in the incorrect folder, and that she had been added to the list.

“I was so excited,” Elinor said. “I had just come to terms with it, and I was pretty heartbroken to not see my name on the list. And then I did a complete turn around because I found out I had been added. It was very exciting to hear.”

It comes as no surprise to see Elinor’s name on the list of developing riders this year, as she’s spent time building up a string of horses to help her gain mileage and experience at the upper levels. She completed her 2014 season with an 11th place finish in the CCI3* at Fair Hill with RF Eloquence, the cherry on top of a year that she’d call a success.

Originally from Ohio, Elinor, who recently turned 24, grew up in Pony Club and found her dreams at Rolex as a volunteer when she was 10. “I went and volunteered, and that’s when I knew I wanted to event,” she said. “My mom fox hunted, so I grew up around the horses, and I kind of always knew I’d find what I wanted to do with it.”

With the focus on learning and becoming competitive at the top levels, Elinor eventually moved to Ocala permanently to train with Clayton Fredericks. She acquired three talented horses: RF Eloquence, Rendezvous With Charly, and True Dynamite, to help her achieve her goals in their own individual ways.

“RF Eloquence is kind of my main guy right now,” Elinor said. “I got him from Clayton as a six-year-old and we struggled a bit to form a bond in the beginning. He’s quite spooky and likes to have his hand held on cross country.

“We moved him up to Advanced two years ago, and then we ended up moving him back to the two-star level to re-qualify after he had an injury. That was really our defining moment, the two-star at Ocala earlier this year. He just came out a completely different horse with so much confidence. So now it’s just about maintaining that confidence.”

Rendezvous With Charly is a different ride from RF Eloquence, a bigger and heavier warmblood type. “He’s taught me a lot on the flat because he’s incredibly fancy, but he is a bit tougher for me to ride with his type,” Elinor elaborated.

Finally, True Dynamite is a Thoroughbred mare who was originally sourced to be a broodmare. Previously competed through Advanced with Kaleigh Holland, Elinor took over the ride at the beginning of 2014, and the mare ended up being a great way for her to get more mileage. “She’s an awesome cross country horse, a real confidence builder,” Elinor said of the mare.

Elinor is looking forward to working with Leslie Law, and is excited for the opportunity to have him take a look at her three horses. “I want him to help gauge where they’re at and what they each need to work on,” she said. “RF Eloquence will be the main one, but I really want to get the other two in front of him as well to see what we need to continue to improve the most.”

Looking ahead, Elinor’s ultimate goal is to represent her country internationally, and she’s also got her eye on Rolex as her first four-star with RF Eloquence this spring. “He’s really the type of horse who needs a lot of confidence, so it’s really going to be more about getting through the spring and seeing where we are after April. But I’d like to do Rolex this  year and see where we can go from there.”