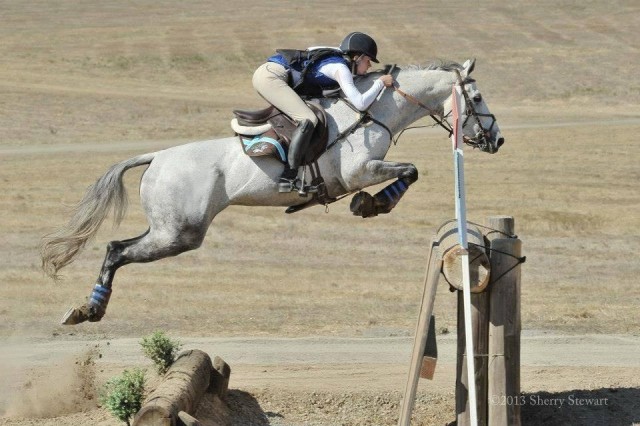 Helen Bouscaren was ready for some good news when she received word she’d been selected to the 2015 Eventing 25 program. After receiving an H.E. “Tex” Sutton grant from PRO earlier this year to compete at Bromont, she was unable to make the trip after her 10-year-old OTTB, Ben, suffered a minor injury.

Ben has been sidelined since then but is coming back into work just in time to pick up training with the yet-to-be-named Developing Rider coach — it’s down to Mike Huber or Leslie Law — during the E25 training sessions. Helen’s got her eyes fixed on competing in her first CCI4* in Kentucky next spring, and she’s excited to have the opportunity to receive more training in preparation.

Helen grew up in the Seattle area before moving to North Carolina for a brief working student stint with Rebecca Howard at The Fork. Once she completed that, she moved back to Seattle to return to school and eventually moved to California to work for James Alliston.

“I worked for James for about a year as an assistant, and we ended up starting a business together,” Helen said. “He helped me get to the Advanced level last year, and now I help him with assistant duties and coaching when he can’t be there.”

Helen’s had Ben (Petersburg X Tough Duchess, by Tough Knight) since he was a scrawny 3-year-old that raced once in Canada. “He was very gangly and not a very good looking horse, but he was in my budget, so I started working with him,” Helen recalled fondly.

“When he was 5, he did his first Prelim, and a lot of people thought he’d top off there and not go farther. He kind of jumps rather flat and jumps the same way over 4-foot as he would 2-foot, so I was advised to sell him many times. So I thought I’d go with the opinion of those who knew better, and I did put him up for sale, but he didn’t go, and so I just kept him.”

Fortunately for Helen, she made the right decision, and she came away with a cross country machine that has skipped through the levels with her. “I kind of always thought he was a good horse,” she said. “A lot of the older style trainers I worked with liked him a lot, and once James took him out competing for me, he was on board as well,” Helen said.

“He’s not the flashiest on the flat, which is rather important now, but he’s a dream to ride cross country. He’s really honest, and it never really felt like either of us was behind on the learning curve even though we were moving up together.”

Helen and Ben made their Advanced debut at Twin Rivers in 2013, finishing their weekend strongly in fourth place. Later that year, they made their CCI3* debut at Galway Downs, where they placed seventh with just some time on cross country and a rail in show jumping.

Since moving up to Advanced, the pair has not finished outside of the top 10 save for one technical elimination. Helen feels confident that Ben is the horse she wants to continue to gain experience on, beginning with Rolex next spring.

“He’s young, so there’s no sense in pushing him,” she said. “But if he comes out in the spring and looks great, we’ll compete out here on the West Coast and go to Kentucky. He may not be an Olympic gold medal horse, but he’s the horse I want to get the mileage on to be more competitive internationally in the future.”

Helen participated in the Eventing 25 sessions with David O’Connor last year, and he gave her valuable tools to use on a daily basis, she said. “Ben tends to get a bit tense and nervous, and David really helped me come up with a formula that worked so I wasn’t getting on and just hammering him. It’s more of a mental game with him; he’s capable of doing everything from a physical standpoint.”

Helen is looking forward to working with the new Developing Rider coach this year, as she feels it’s always helpful to get outside instruction. “I love working with James, and he’s been a huge help. The (Eventing 25) sessions will be very helpful in building on my knowledge, and I think it will be great to get us a jump start on the new season.”

Helen also has a couple of younger horses coming up that she feels will have talent for the upper levels in the future. In the meantime, she’s going to continue learning with her handsome gray partner, and she can’t wait to see where 2015 takes her. She’s off to a great start by being named to the Eventing 25 list once again, and we’re sure we’ve not heard the last from this talented pair.