First, thanks to Coren for the very public birthday wishes–a simple text would have sufficed, but I guess now we know who gets stuck with the Saturday morning post this weekend.  Terri Impson of Thailand has sent us her 6th and final report from the Asian Games in China.  The VA based horses and riders who competed in the Games are on their way back to the States now and I hope they get here before this brief stretch of beautiful autumn weather ends.  As always, thanks for writing this Terri and thank you for reading.
—- 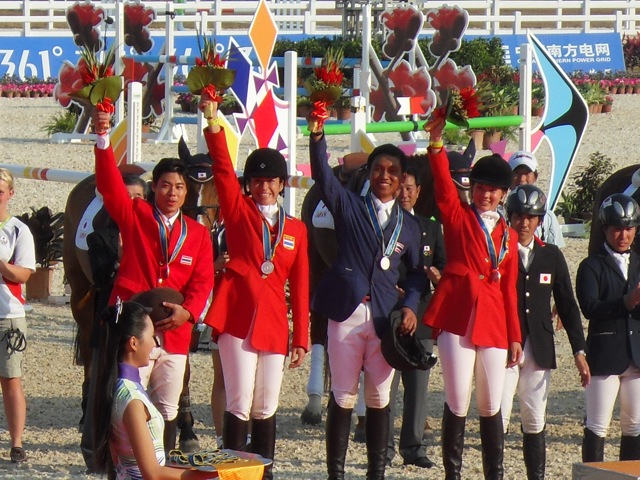 The Thai Team ended up taking the Silver medal–our first equestrian medal since 1998! Japan was Gold with all double clear rides. Their riders were all experienced show jumpers before they tured to Eventing and they were fresh off the WEG’s in Kentucky. China took the Bronze and their Team was so overwhelmed on the podium I thought they were going to burst. One member turned to us and apologized for his enthusiasm saying he was just “so excited” to be there for Eventing.  I was so proud of our Team. We were the youngest by far of any of the countries and at times it felt like high school competing against the NBA. While on the podium, we were glad to have Kim at our backs reminding us to wave, the boys to remove their helmets for the anthem and our experienced grooms to handle the horses in all the chaos.

The show jumping course wasn’t particularly huge, but it was very wide. The final combination was along the crowd and off a turn; a max width oxer TWENTY-SEVEN feet to a vertical then depending on how you jumped in, a 7/8/9 stride line to the final fence which was a funny looking medallion gate oxer. The stadium was packed and the crowd enthusiastic. When you hit a rail the gasps were so audible you could hear them from the barns a good distance away–they were really rooting for the horses of every country to jump clean.

The Thai Team had two horses in the top 14, which meant they would show jump an additional course for the individual medal. Unfortunately Nina Ligon just missed the podium with a rail down on a vertical  but was still riding high graciously on our Team success. Japan’s Kenki Sato won the individual Gold riding Toy Boy (you have to smile) and it couldn’t have gone to a nicer person. He was always smiling and polite–unchanging from the quarantine in Aachen, Germany to Guangzhou, China. He’s also a Buddhist monk and when asked at the press box if this was his first Games, he very nicely answered “No, the World Equestrian Games in Kentucky was my first Games.” Ha!! It’s nice to know that the press over in Asia is as ignorant of our sport as in other countries.

As this is my first international Games competition I will rely on the comment from Kim that this is one of the best run Games she has been to. I do know that everything ran without a hitch. The buses were impeccably punctual, the schedules were adhered to and we never wanted for anything. Everything was top notch down to the footing and the farrier facilities. The same company that handled the WEG’s ran the bedding and feed here in Guangzhou and service was prompt, courteous, and fresh. China even adjusted their meal schedules for the equestrian athletes seeing how late we came in from the barns and including dinner items in the “night snack time ” service that ran from 830-1100.

I am now in Bangkok, Thailand with my Mother, who is the whole reason I decided to embark on this little historic adventure halfway around the world. I took  a tough  little 1/2 Connemara by Grange Finn Sparrow, owned by my friend and student, that I correctly thought would make the very long journey look like a walk in the park. This was an opportunity to represent my other country and my chosen sport in a positive light and get others excited about it. When I saw the expression on that Chinese athlete’s face on the podium, I remembered all the trials and tribulations that no one will know he has gone through to get there, the “almosts” and the disappointments—the journey—this time to fruition, fueling the drive to do it all again. Perhaps I’m too American or perhaps I’m too oblivious (!) but while being interviewed by a woman Chinese reporter, the questions turned to how I felt about being an inferior “female” to the males and also what I thought of the general knowledge that men were much more successful  in Eventing  than women. After remembering quickly to quell the “inside American voice”  I referred to the sport being the only Olympic Sport that pitted women against men EQUALLY, but that I also believed they were also equals in life.  Only then did I remember that Nina and I were the only women on the podium and that in other parts of the world Eventing is considered a “men’s sport” WHO KNEW?! Then I briefly worried that I should be careful with my comments as I did want to make it out of China and back home! Big smile!

I hope you’ve enjoyed sharing our Team’s story, big thanks to John and Eventing Nation for letting us. I’m ready to kick back for a few days, get a pedicure and then get back to my support team on my farm in freezing Virginia. Gotta hop on my fancy five yr old – ’tis the season to sharpen the flatwork!