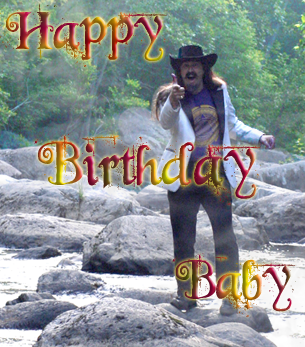 (I googled “Happy Birthday Weirdo” just for this picture)

Today is a very important day for Eventing Nation because…. it’s John’s birthday!! For those of you who don’t know John personally, you should know, this is something he would not talk about. John is pretty quiet when it comes to talking about things having to do with him. That is why I feel it is important to let the entire EN world know about the importance of this day. For those of you who do know John personally–God help you on this day. John, I know what you really want for your birthday, but I am just not interested in buying you an iPhone. Therefore I am going to let EN pick what to get you….

For his birthday John should have:

Now for some news and notes….

– Several Horse Trials wrapped up this weekend. In Florida, Leslie Law won the Open Prelim A on Zoe with an impressive score of 23.2. Jon Holling won the B section with the very promising Downtown Harrison (ask the Hollings for the story about this horses name sometime). Lauren Kieffer and Buck Davidson had a busy weekend with some good results as well.

It is also exciting to see that both Ram Tap and Las Cruces Horse Trials offered many lower level divisions including “pre-comp” and “intro beginner novice” divisions to allow horses and riders a very friendly and fun level to enter the world of eventing.

–The Jurga Report states the Edward Gal told two German media that he would change nations to ride Totilas again. I personally would love to see Edward keep the ride on Totilas and I am sure many others would agree.

-Two Azerbaijan bloggers who were jailed after posting a video on YouTube of a donkey giving a press conference satirising the government have been released.

– As usual the British are making changes in their system. They have decided to “revamp” the under 18 team. In addition, they have added KBIS as a new sponsor to the under 18’s and new regional coaches were named. Looking forward to London 2012 and beyond, the senior team is now offering a unique opportunity for sponsors to back the four different equestrian teams. I really admire the British and their ability to constantly find ways to help and support their riders.

-In England a man wanted to make his pony “more unique and beautiful” by shaving a 16 cm square on the pony’s hindquarters and tattooing the outline of the Rolling Stones “tongue.” Thank goodness the man was sent to court before he could finish.