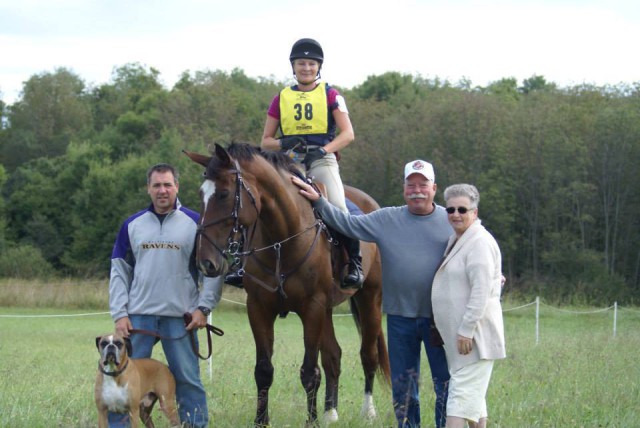 Nicole Hyden and her family. Photo via Hope for Nicole on Facebook.

Nicole Hyden and her Dutch Warmblood gelding, Regalo, were competing at Fair Hill at Training Level in August when they had a rotational fall. Regalo, known as “Rebel” in the barn, walked away from the accident with no injuries, while Nicole was airlifted to Christiana Hospital in Newark, Del.

Doctors found that Nicole had fractured her C6 and C7 vertebrae and underwent two surgeries in three days. While the surgeries were successful, Nicole has now been diagnosed as a quadriplegic. She is currently undergoing three hours of physical therapy each day at Magee Rehabilitation Center in Philadelphia with her husband, Fred, by her side.

“There is substantial damage,” Fred said. “We just have to keep working and fighting to keep her spirit up, and she has been making great progress with her rehab.” She’s now been given the green light to take off her neck brace and has also been experiencing some ability to engage her quadricep muscles while attempting to stand without assistance.

This progress is encouraging, and while Nicole still has a long road ahead of her, her friends and family are bolstered by her vibrant spirit and refusal to give up, character qualities that also defined her life in the saddle. Nicole has years of experience as a horsewoman, having served as a mounted officer for the Newcastle County Police Department in Deleware in addition to competing in eventing.

“She was a Pony Clubber in her early days,” Fred said. “After college, she knew she wanted to join law enforcement because her father and uncle were both in the industry. She went on a ride-along and was hooked. She wanted to be an officer, and she wanted to be in the mounted unit. She spent some time as a detective working on domestic violence cases and continued to ride and compete outside of her career.” 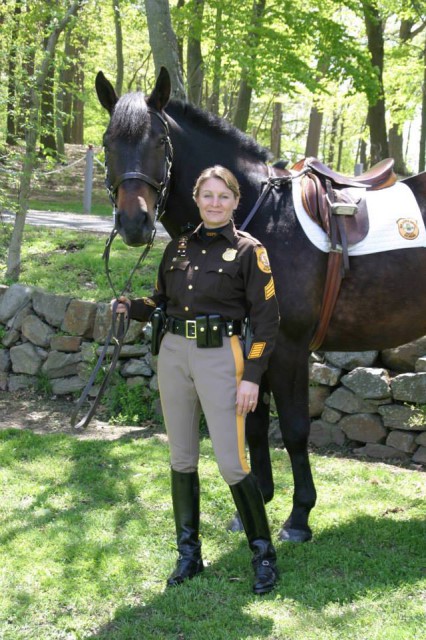 Nicole and Cisco during her mounted years. Photo via Hope for Nicole on Facebook.

Nicole was promoted to Sergeant in 2000 and set her sights on joining the mounted unit. “She focused on creating a more proactive unit,” Fred said. “She soon had them out writing tickets and going on warrant attempts; before, they were more of a parade unit, and now they were writing as many tickets as a patrol squad. She really helped keep the unit going, and her focus was on keeping the horses in the forefront.”

She often went out on warrant attempts herself as a mounted officer, and she once led a chase on horseback of an individual who decided to flee. Nicole served with the Newcastle County Mounted Police Department until her retirement after 21 years on the job. She later worked with the University of Delaware Police Department and was promoted to the rank of Corporal last November.

Nicole and Fred are now preparing for their new life once she is released from the rehabilitation center, as their home will need equipment for outpatient therapy, as well as wheelchair accessibility. “We have an elevator to purchase and put in, and more modifications need to be made to the house,” Fred said. “Our house is pretty well set up, so once we get these modifications completed, it will be quite accessible for her.”

Nicole’s family is hosting a pig roast on Nov. 15 in Hockessin, Del., to help raise funds for the elevator and other modifications to the house. A 50/50 raffle and silent auction will also be held at the pig roast. Those interested in attending can visit the event page on Facebook here.

There is also a general fund set up to assist Nicole. Online donations can be made here, and checks can be sent to:

The Fraternal Order of Police is a non-profit organization, and Nicole’s husband is the president of the Delaware chapter. All proceeds donated and sent to the lodge will be used to purchase what Nicole needs when she is released from the rehab center.

As eventers, we are a close-knit community. When one of us experiences tragedy, we all hurt. We reach out and help in any way we can, and Nicole’s case is no different. We are all pulling hard for Nicole as she goes through her recovery. The EN family would like to extend its most sincere well wishes to Nicole and her family.

You can follow along with Nicole’s progress on her Hope for Nicole Facebook page, where updates are regularly posted. You can leave an encouraging message for Nicole over on her Facebook page or in the comments below.