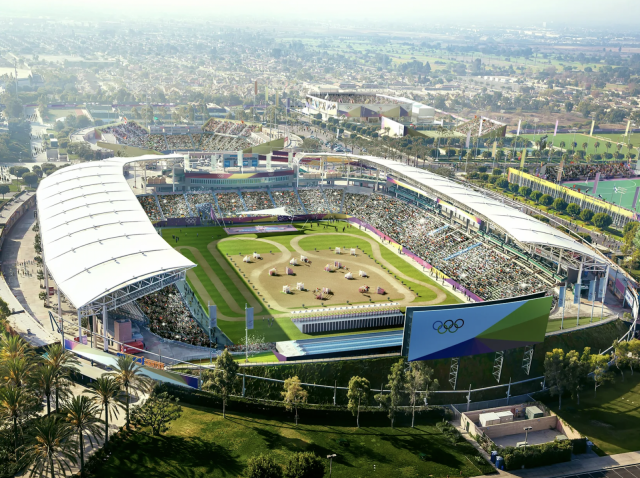 The latest update to the planned location designs gives the equestrian sports an impressive home for the LA Olympics in 2028. Photo courtesy of Los Angeles 2028.

We’ve still got another two years to go before the 2024 Paris Olympics, but the IOC’s engine never stops whirring, and this week we’ve been gifted with a serious date for our diaries in six years’ time: the Los Angeles Olympics, which will be held in the California crown jewel for the third time, will take place from July 14–30, 2028.

But where in this expansive city will we see the action take place? And more importantly, will there be a cross-country jump that looks like the Hollywood sign? While we’ve got no confirmation one way or another on the latter (but are happy to offer our services as fence decoration consultants as needed), we do have some teasers to point us in the right direction for the former.

The Paris 2024 Olympics are setting a precedent for unique opening ceremonies: they’re dispensing with the idea of a stadium-based celebration entirely, instead taking to the Seine on a series of boats for a parade of sorts that anyone in the city can watch. While L.A. isn’t following the same script, they’re also doing their own thing — instead of one ceremony, there’ll be two, hosted concurrently at the Coliseum and the SoFi Stadium, giving even more spectators the chance to get involved with this unique, creative, special part of the Games. 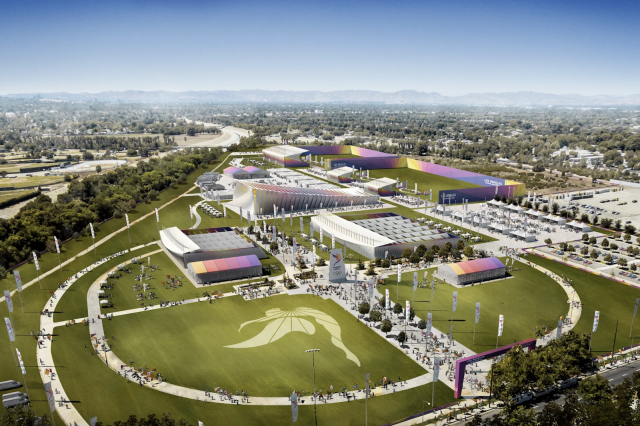 An artist’s interpretation of the Sepulveda Basin Recreation Area’s temporary facilities – some of the only temporary venues planned for the 2028 Games. Photo courtesy of Los Angeles 2028.

One of the major issues we’ve seen with previous iterations of the Games is the enormous cost of creating infrastructure, which often ends up as a sunk cost when those purpose-built venues and structures crumble into disrepair in the years following the Olympics. But because L.A. has such a rich history of hosting top-level sport, including the Olympics in 1932 and 1984, it benefits from a number of excellent venues that’ll be updated as needed. Those include the Crypto.com Arena, home of major sports teams including the Los Angeles Lakers and the Pauley Pavilion, which hosts a number of sports on the UCLA campus. UCLA’s student dorms will also become the athletes’ village, which means some lucky freshmen will get to move into a room that was once occupied by gold medal-winning legends. These efforts are estimated to save the organisers billions — yes, with a ‘b’ — of dollars as they turn L.A. into the home of global sporting excellence for their stint. 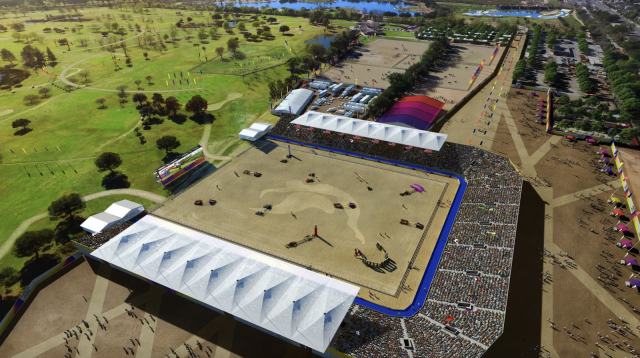 One of the earliest bid photos for the equestrian facilities shows a temporary arena that isn’t dissimilar to Greenwich’s arena for London 2012. Photo courtesy of Los Angeles 2028.

And the equestrians? They’ll head to Encino, in the north Valley area between Kardashian-klub Calabasas and Burbank, to the Sepulveda Basin Recreation Area. This is already a popular area locally for recreational sport, with a number of existing facilities, but it’ll look wildly different once the Games hit: the equestrian disciplines, shooters, and canoers will use this facility and its adjacent space, benefitting from one of the few temporary constructions of the 2028 Games. That’ll include a grand arena, which looks like it could be of a similar design to the temporary platformed arena installed in Greenwich for the London 2012 Olympics, and though we don’t have any information yet about how the cross-country course will be set and designed, some of the artist interpretations created for the bids show us a very promising swathe of land extending behind this arena. Indeed, there’s a golf course that spreads out from the recreation complex, though it’s fairly comprehensively tree-lined, so it’ll be interesting to see whether they use this space for the roughly 5700m course or do as previous Olympic committees have done and travel to a separate location for this phase. We’ll bring you more info as it’s released – in the meantime, we’ll be pondering which rider we’d like to see installed on Hollywood’s walk of fame.