We announced the finalists in the 7th Annual EN Blogger Contest, and now we are bringing you their first round submissions. Leave your feedback in the comments, and please offer your encouragement and support to the finalists! We hope you enjoy their creativity, insight and love of the sport. 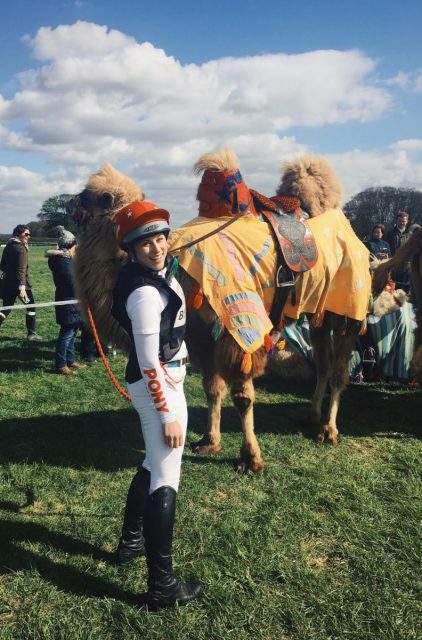 After ten years in the States and six years back in the UK, playing ponies the whole time, I’m often asked whether I find the equestrian industries different in each country. I’ve given it some thought, and come up with some of the most pertinent differences.

US – There are five horse and rider combinations in your class and one toddler that’s snuck in on the family Labrador. Three of the riders come off by the third fence, a fourth decides to reroute to the tailgating party, and the fifth is only here because he got lost on his way to the barrel-racing. In a close competition between you and the Labrador, the latter wins.

UK – There are 82 entries in your 80cm clear-round jumping class and all of them are trying to warm up at the same time. You can’t be positive, but you’re pretty sure the unfortunate looking girl who won it was actually Mark Todd in a wig.

US – Find some tenuous connection between your horse or your saddle and the continent and you can add a couple of zeros onto your asking price, even though you’re selling an eighth-generation show jumping import to an amateur dressage rider. It’s German, whatever.

UK – Are we? Aren’t we? And more pertinently, is my German horse going to be deported if he doesn’t start making himself useful soon?

US –If you like the idea of jumping, join in with the first flight. If you’d rather save the adrenaline rush for the odd gallop, join the second flight. In third flight we tie your horses together like a chain gang so that when you bounce off during a particularly climactic trotting session we don’t lose them. Fourth-flighters sit in the huntsman’s wife’s living room, look at hunting prints and hyperventilate.

UK – The countryside you’re traversing might feel wild and remote, but jump the wrong six-foot hedge and you’ll suddenly find yourself in suburban Croydon, galloping full-pelt towards a semi-detached house. It’s okay, you’ll be too drunk to notice and your horse knows that if he stops at exactly the right moment, you’ll clear it anyway.

US – Can you trot a twenty metre circle? Just the one? Fantastic; that’s all we need from you.

UK – Do you remember that iconic scene in Dirty Dancing? With the lift and Patrick Swayze’s terrific biceps? You’ll be expected to perform this with your horse in the role of Johnny. Be prepared to lose two marks per judge if you don’t perform with sufficient emotion to make them have a little cry.

US – Don your Wranglers, grab an ice cold Bud Light, and catch up with Linda from Maryland to find out if she ever did break in that ornery little Mustang of hers. Ooh, look, someone brought queso!

UK – Bet a ten-year-old you never imagined you’d find yourself doing shots with a famous rider in a thirty-eight bedroom country manor house.

US – You once saw Phillip Dutton from across five warm-up rings at Waredaca and you’ve framed the schooling whip you were using at the time for posterity’s sake.

UK – There are no degrees of separation and everyone you know has a sordid story about something they did in a lorry park with one of the top-ten finishers at Badminton this year.

US – Grab ten of your closest friends and squeeze them in your Dodge Ram – you’ve got an 18 hour road-trip to Kentucky ahead of you!

UK – Your Badminton hangover has barely recovered before it’s time to stumble over to Burghley. Bored in between? Might as well see what the craic is at Pau or Luhmühlen.

US – Your gooseneck trailer is your pride and joy. It can fit 2.5 horses, at least six water buckets, and if you give up all notions of comfort, romance, and happiness, you can just about fit yourself and your partner in the tiny bedspace over your truck bed. Great fun.

UK – Your lorry sleeps four, which means it sleeps eighteen, if you’re committed enough to drink until it seems comfortable. (Spoiler: you are.)

US – You sourced your OTTB off the backstretch at Charlestown Racetrack through a helpful contact at CANTER Mid-Atlantic. Now, you’re hoping to win the Thoroughbred Makeover and have taught him to carry an infant around a 3’ hunter course with no tack.

UK – He won the Champion Chase at Punchestown in his heyday and despite a running gag that weighs as much as a toddler and a gym regimen that would make The Rock wince, you’ve not been able to hold one side of him since you bought him.

US – If you occasionally ride on the roads there’s an element of novelty value attached. You might even put on a clean pair of breeches to impress passing drivers.

UK – Your horse has spent so much of his life trundling along the A272 he actually thinks he’s a Ford KA.

US – “Oh, we’ve only got a small place, but with two horses we thought anything bigger than 2000 acres would just be overkill.”

UK – “I paid £525,000 for this half-acre plot but it’s really revolutionised my horse’s fitness. We only have to canter around it another 478 times before we’ve done the equivalent of a cross country course!”

US – Seventeen years old and well-versed in 85 hour work weeks, the American working student hopes to one day ride around her first event, if she can ever find the time or energy to ride her horse.

UK – They’re all two-star riders despite being too young to hold a driving licence. You will feel emasculated by them ALL. THE. TIME.

About the author: Tilly Berendt, 25, is a full-time equestrian journalist with rather a lot of fun stories to tell about the adventures she’s had and continues to have. She’s had a few incredible jobs working for some incredible horsemen (and women), including Phyllis Dawson, William Fox-Pitt, dressage phenom Andrew Gould, polo wizkid Jack Richardson, and many more lesser-known but no less educational riders.