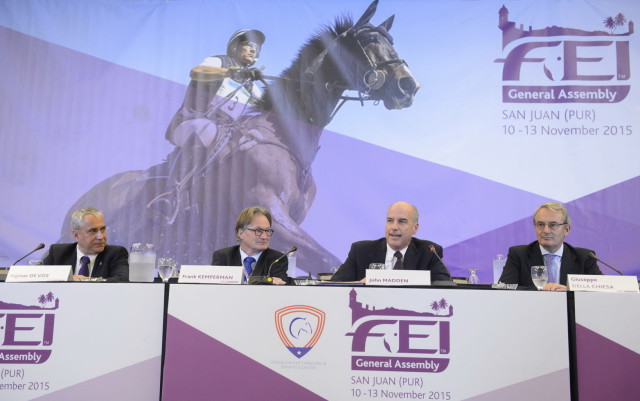 Bruce Haskell, president of ERA International, has penned an open letter in light of a meeting be held in London tomorrow for key stakeholders and representatives in the sport to discuss the future of eventing under the Olympic Agenda 2020.

You can view the entire letter open letter by clicking here, and read on for key highlights. The meeting, hosted by British Eventing and chaired by David Holmes, will bring together representatives from many national governing bodies to search for solutions ahead of the FEI Sports Forum in April, where the new Olympic formats for all equestrian disciplines will be presented. Click here to see the current proposed changes for eventing’s Olympic format.

“The proposed format has some significant changes that intend to meet the (International Olympic Committee) suggested criteria for making our sport more easily understood to a wider audience and increasing nation participation,” Bruce said. “It also makes a clear attempt to retain the ‘core’ of eventing whilst enhancing the separation from team and individual medals.”

ERA International acknowledges the divisive nature of many of the proposed changes to the Olympic format of eventing and has identified three core issues that remain divisive:

“Eventing has to be careful at this point and consider the future of what our sport will look like at all levels. The Olympics, as we have seen in past, has a top down effect of the rest of the sport,” Bruce said. “There is a potential influence that in order to meet IOC criteria of the Olympic Eventing competition being the highest level of our sport, we may have to use this format at all team competitions.”

The intent of tomorrow’s meeting is to draw conclusions, even if the conclusion is that a consensus cannot be achieved. “The meeting is seen as as a way of supporting the FEI Eventing Committee to be able to produce an Olympic Format that both meets the changing needs of the sport and the need for change from the IOC,” Bruce said.

“Whatever the outcome will be ERA International is aware that change needs to occur. Change will never suit all stakeholders. We must all look to find a balance between the role of eventing in the evolving nature of sport as medium of entertainment and the traditional values of our unique sport. The time for change is upon us and this meeting is essential to defining what that change looks like and what eventing looks like in the future.”

We will continue to provide updates on the meeting and future developments within the FEI as eventing’s Olympic format continues to evolve. In the meantime, you can view the open letter from ERA International in its entirety here: ERA International 2020 meeting 23-2-16 open letter.