EN TRENDS:
If a little bit of Chelan’s writing is good, then a lot of it must be downright awesome.  With that in mind, please enjoy a tour of west coast eventing as only Chelan can tell it.  Afterwards, check out Chelan’s blog for more fun.  Note: to our readers who like to enjoy a nice cup of coffee or a glass of wine while reading Eventing Nation: be careful, this post might make you laugh.
—-
Pismo Beach, near Twin Rivers
Chelan Kozak here… CCI4* rider (damn, I like saying that!) Born and raised in BC, Canada. I currently live near Vancouver, BC, home of the 2010 Olympic Winter Games. My barn and business are close to the WA border, and by close, I mean the border is a 15-minute trot hack away. Actually if your horse is good at ditches, one could theoretically simply cross over into WA over the ditch next to the parallel road, and head south. Since there are cameras everywhere (to catch the drug smugglers), I do not recommend it- sort of a quick route to getting arrested and banned from ever entering the US again. Those border guards have more power than cops do and WAY less sense of humour. Come to think of it, from our barn, the shortest route to theoretically ‘hop the ditch’ into the US would take you past a farm with a vicious male llama who rushes the fence hissing at the horses. Maybe more scary than the border guards, in fact.
In order to understand West coast eventing, we need an introduction to a key player from ‘back in the day’. My first introduction to Nick Holmes- Smith was in 1988 when he was preparing for the Seoul Olympics. His groom was sick and so I was brought in for the events leading up to the Games, and the games themselves in Korea. As it turned out, I stayed as a working student for two years, and subsequently in the East for 10 years total. While he was based in the East at the time I worked for him, the West coast feel was alive and well. Nick always said he would come back to BC, and by God, he did. After Barcelona in 1992, he went back to BC and set up Chase Creek which ran up to CCI2* level for several years. However, the BIG deal at Chase Creek was the camps and clinics. Nick is not a big fan of dressage, (in fact, on the camp entry, it specifically stated NO dogs, and NO dressage saddles!) but ask anyone, he knows how to ride and coach cross-country. By the end of weeklong camps, pre-training/novice horses were routinely jumping Preliminary (or above) lines through water, coffins, etc. And not easy peasey jumps, either. Nick built his own fences, and traditionally they were big and solid. He has a giant dirt mound separating two water jumps that would look at home on any four star course. At various points in time, varieties of different jumps have been placed at the top, or on the up or down side of said mound.
Regular Chase Creek attendees were the likes of Mike Winter, Jon and Suzy Elliot, Amy Tryon, Hawley Bennett, Rebecca Howard, Steph Rhodes- Bosch, Therese Washtock, and myself to name but a few. Clinic, camps and events at Nick’s were as he likes to say, ‘rough and ready’ No electricity in the barns, running water only from a well spigot from the creek. For obvious reasons, those of us ‘fancy’ enough to have whirlpool boots could not plug them in if we wanted to. Since the nearest town from Chase Creek event and camp is a good 30-minute drive one-way to get ice, the obvious solution was to simply stand the horses in the creek. Pretty much at any given time of day, there would be horses and riders bare back with halter and lead rope hanging out in the creek. In addition, there are few actual stalls there. Mostly the horses are in pole corrals in the trees. The unlucky ones get say a stump in the middle of the outdoor stall, but getting the winning lotto of pole corrals involves maybe one that is twice the size, due to tree configuration. If it rains, or in the summer is too hot, tarps are the norm. This ‘stall’ arrangement remains today in most events in BC, (and a few in area 7 in WA) and provides endless amounts of trouble, or entertainment, depending on one’s perspective! There are always a few ‘lone’ stalls with no neighbors, for bitchy mares or evil kicking horses not well socialized enough for such group stabling. Even the happy go lucky ones sometimes end up in amusing predicaments. Clearly loose horses are far more prevalent, and it is not uncommon to wake up in the morning with a partition down and two horses sharing accommodations, food water (and tarp roofs!). Most events also have a few limited numbers of ‘real’ stalls for the less brave. 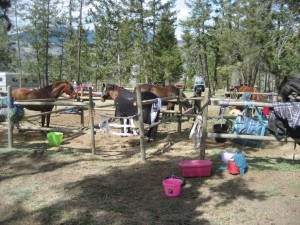 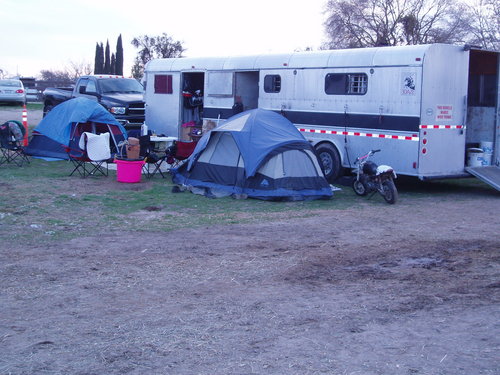 Camp 3DAZE
Accommodation- So, I have covered the ‘ahem’ stabling for horses, but what about riders? Don’t misunderstand me; there are plenty of people with living areas in horse trailers and sleeping in hotels. However, the tenting: rider ratio is much higher in BC and area 7 than on the East coast. I remember one year dragging a gang of girls down to Woodside in CA and it specifically stated ‘no tents’. We were horrified! Where would the girls sleep? As it turns out, there were a few contraband tents here and there on the grounds. Hawley Bennett was tenting it up when she first went to California, and look at her now! This leads us to.
Social- Sorry, we are just more fun out here! Look, I have had plenty a good time on the East coast, but eventing out West is generally more social. I produce exhibit A, the margarator. The margarator comes to all events with me, gets set up in the barn (mostly after XC) to provide margaritas in the stables. Aspen Farms has a games night (egg and spoon, wheelbarrow races, etc) at the Saturday night party, which gets very competitive. Twin Rivers has had many doggie costume competitions. Whidbey Island, WA and one of our events here in BC has a yearly ‘Can Am challenge’ including un-mounted games, which last year featured tequila shots and limbo. All this on a full stomach of grilled Pacific salmon and raspberry shortcake, YIKES. We take our preparation for competitions seriously, and train and work hard. At the end of the day though, there is a fun feeling of community and we kick back and enjoy ourselves.
One particularly funny story is from an event in Idaho that no longer runs. The owner bought her daughter ‘safety man’ a lifelike man’s torso to go with her on long drives (see ‘distances travelled’ above) After a few beverages Saturday night, we commandeered safety man, dressed him and put him in one of two port-a-loos located at the SJ ring. We put a sign on one of the loos that said, ‘out of order’ which made sense at the time… In the other one we put safety man, fully dressed and with one hand on the toilet paper roll and one hand with an empty bottle of wine. Sunday morning was hilarious needless to say!
Ask Amy Tryon, Jon and Suzy Elliot, Hawley Bennett, Gina Miles or myself why each of us (and others) choose to live so far from the epicenter of our sport. You will get a few different answers, I am sure. I can only speak to my own choices, but the West coast is home and I love living here. 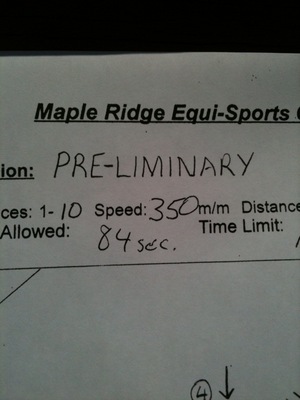 —-
Note: John here again… in a quick follow up to Chelan’s comment about Rebecca Farms, the word is that this year there will be quite a few big names making the trip out to the event this summer.  Plane tickets for some big time horses have already been purchased, and it is shaping up to be a well attended event.
0 0 votes
Article Rating
Subscribe
Login
Please login to comment
0 Comments
Inline Feedbacks
View all comments
More Insanity on Horse Nation >>