Eventer Ashley Adams has relocated to New South Wales, Australia, to start her new year, and she’s graciously agreed to blog about her experiences down under. Stay tuned for more from Ashley as she experiences horses in the Southern Hemisphere. You can follow her Facebook pagefor more updates. Many thanks to Ashley for writing, and thank you for reading. 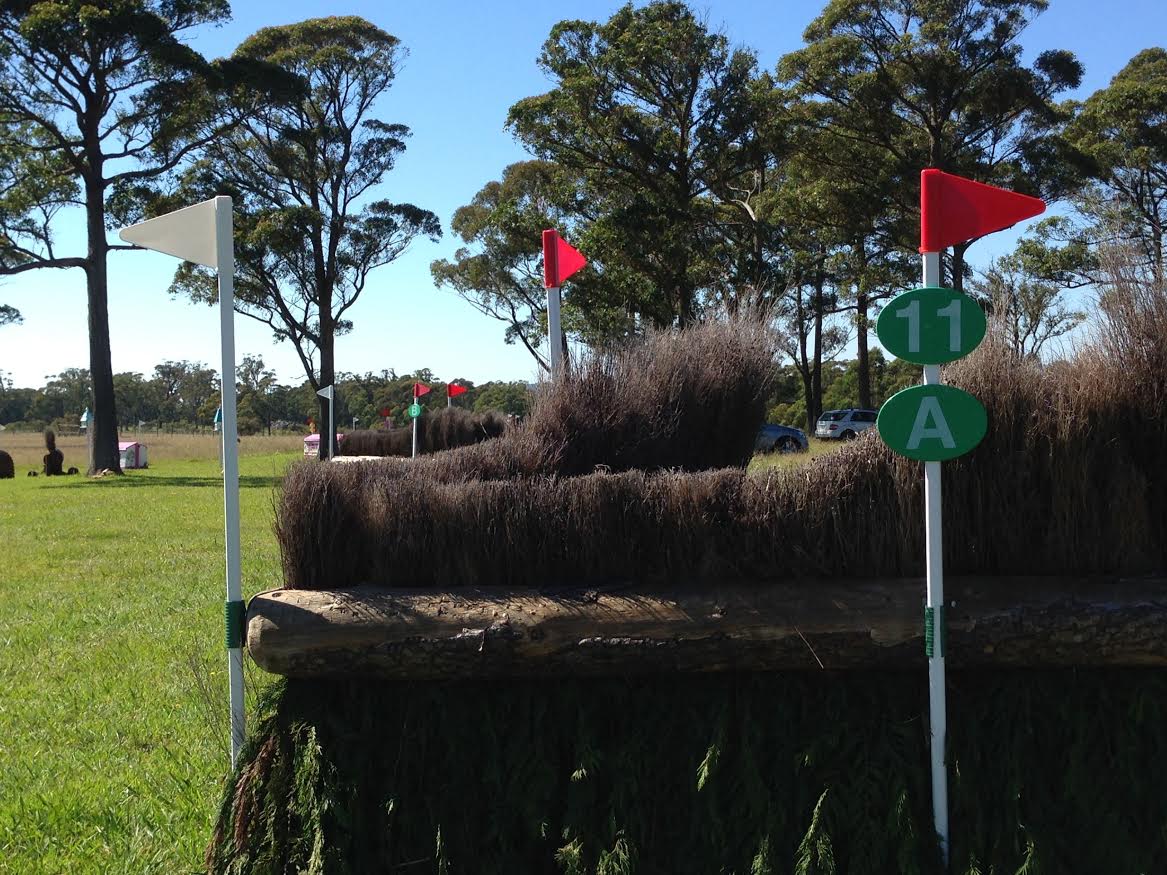 Last weekend I was invited by Sam and Nicky Lyle to go and watch my first Aussie Horse Trial. It was held at Wallaby Hill Farm, just on the other side of Kangaroo Valley. It was a beautiful facility to say the least, and owner Alexandra Townsend is also an upper level eventer. When I drove in, first thing I noticed were the trailers, also known as horse floats, or lorrys.

Some were your typical, all in one, large bus type thing, some were two horse tag-alongs being pulled by Jeeps or a small SUV, and some were larger flat bed trucks with more American style trailers. Virtually all of them had some kind of living quarters, so I gathered that camping was a big deal.

You also stable your horse in “pens or yards” — most people bring these themselves, or they are built there. The pens are literally just squares made out of some kind of pipe that are very, very, open. People put rubber water tubs on the floor and some hay in there. Stupidly, I asked, “What if it rains?” and someone answered, “They get wet!”

The horses can touch very easily both above the chest high bars, in between the two bars, and below them as well — crazy to me! If you bring your own yard, you set it up behind your trailer/camper.

When I got there I went and found Annabel “Bols” Armstrong, whom I had met a few weeks prior when I was riding for Sam and Nicky. She and her partner, Hamish Cargill, have a place just a few minutes from Sam and Nicky. Bols, as I was corrected to call her, had a few young horses at the event and she and Hamish allowed me to tag along as their groupie. I watched her show jump a young one and made note of the lovely show jumps.

There was not much difference from our eventing show jump courses in the States, meaning the course required a forward and accurate ride through the multiple roll backs to combinations and related lines. The warm up was significantly more subdued than ours, though! 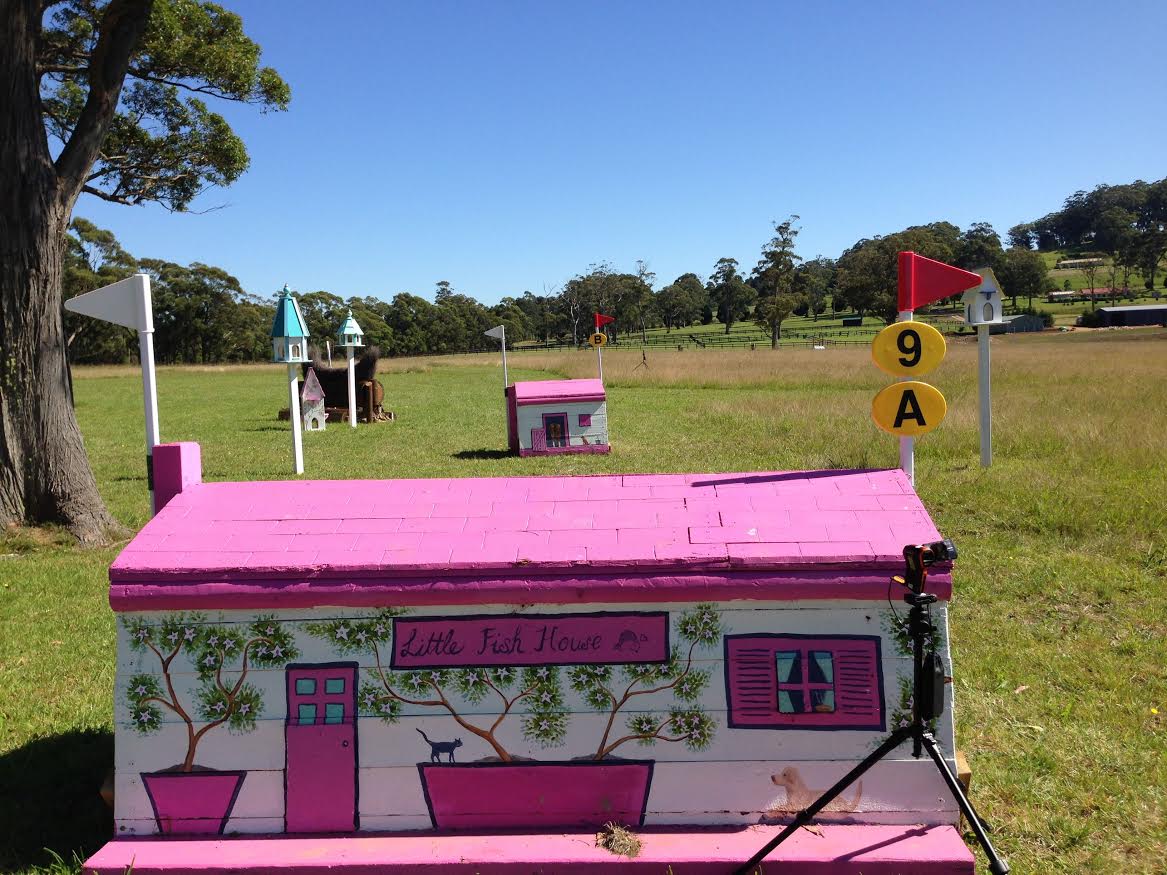 Pink numbers indicated the equivalent of our Training/Prelim. Photo by Ashley Adams.

No one was really getting coached or moving jumps a lot — it could have just been the event, but everyone just went in about their business. I will have to stake out a couple warm ups to see what the most common thing to do is — maybe I’ll learn a few new tricks!

All of the dressage tests I saw were ridden in large arenas. The test themselves were similar, but not identical; I think the level that had lateral work was the CNC*­­, which would be equivalent to our Preliminary. The main fashion for the dressage arena is braided tails and fancy quarter markers for the horse; for the rider, shiny helmets, mainly Antares. There were also a fair number of KEP helmets blinging around. However, under the helmets was a lot of free flowing hair, especially on cross country later on.

I did see more top hats in the CNC2* division than I had seen in a long time. So much so that I asked if it was still in fashion here. Most people said that they just liked them and thought they looked better.

There were not as many sponsor plugs on outfits as we see in the U.S. After talking to a few riders, I would attest that to the lack of large corporate interest in the sport here and the lack of large equine related businesses based here. As I have found first hand, getting any U.S. based company to ship things over to this side of the world costs a small fortune. However, most things are cheaper in the States, so you have to weigh the difference on product cost.

One fact that I did notice on cross country day was that a lot of riders do not wear air vests. In fact, I would say that at least 40% of riders had one of those old vests — one you would see in a early 90s eventing photo! One rider I spoke to said he wore the all-in-one air vest and, that might have been the case for others and I just couldn’t tell.

As for the cross country course, it looked pretty familiar, minus the different colors of the numbers. To the best of my ability, I have deciphered the levels of the cross country jumps in the: purple numbers (EV­80) are our BN/Novice, red numbers(EV­95) are our Novice/Training, pink numbers (EV­105) are our Training/Prelim, yellow numbers (CNC*) are solid Prelim with extra skinnies, green numbers (CNC2*) are our Intermediate. 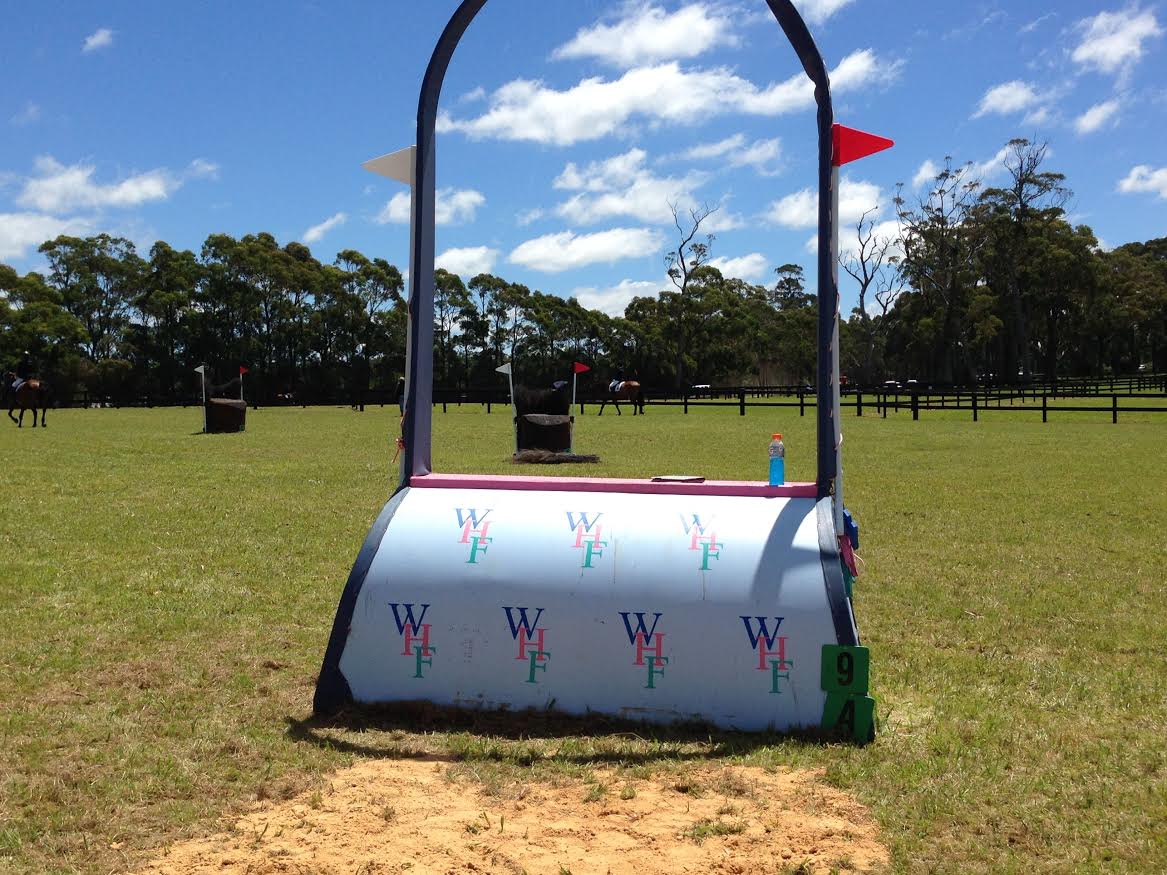 Green is the U.S. Intermediate equivalent. Photo by Ashley Adams.

This was the first real event of the year for most riders, and I asked Sam how he thought the levels looked as far as difficulty. He informed me that for each level they were pretty textbook, nothing over the top or stupid simple.

One large difference that I noticed on was that they ran the horses one minute apart — it was as nuts as the drivers on the roads to me! A rear­ end collision seemed moments away, however most riders were respectful of others and if they got too close they either passed or just slowed down.

I am hoping to keep teaching and coaching some here as well as acquiring some rides here and there when I can…hopefully more here than there! Overall I am of the firm belief that going outside your comfort zone and hitting the just do it button can really be the best. That is what I hope to get from this experience—more experience!

While I jest about this great rock known as Australia and am constantly looking around every corner for things that will without a doubt kill me, I am excited for what I am going to see, learn, and do! I miss all my friends “heaps” (that means a lot) and I am keeping up with all of you from over here!