We've been closely following the ADM Alliance Nutrition feed controversy since January, when it was revealed that ADM feed at multiple eventing barns tested positive for monensin, a substance that is toxic to horses. Numerous horses are now undergoing continuous testing, treatment and monitoring while owners search for answers as to why this has happened and what it means for their future. We're going to get to know these members of our community a bit better in the coming weeks, and you can follow along with EN's coverage at this link. 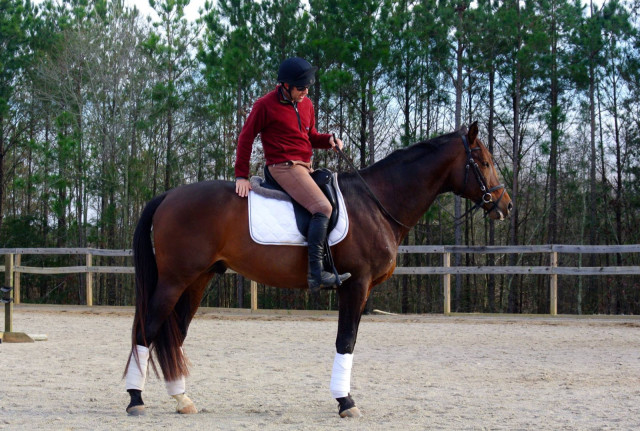 Tatendrang and Andrew Palmer after a flat school earlier this month. Photo by Anissa Cottongim

Andrew Palmer and the 9-year-old Trakehner stallion Tatendrang had hoped to compete in their first Advanced level horse trials together this weekend at Rocking Horse, with a season of three-stars on the horizon. Unfortunately, due to the results of Monday’s stress test, that won’t be happening. In fact, Tate won’t be eventing at all for a minimum of six months.

While recent blood tests showed Tate’s troponin levels were within normal limits and he passed an echocardiogram with flying colors, the stress test, performed by Carol Clark, DVM, DACVIM of the Peterson and Smith Equine Hospital in Ocala, Florida, revealed potential problems.

“Too many things lined with exercise intolerance that couldn’t be explained. However, the function of the heart looks pretty good,” Andrew said.

Dr. Clark’s recommendation was to err on the side of caution considering Tate’s exposure to monensin; the stallion has been cleared to breed and to compete in dressage and show jumping only. When he returns to eventing will depend upon the status of his physical health and heart function.

Although this is not the answer Andrew and owner Anissa Cottongim would have hoped for, Dr. Clark has been able to provide them with a plan of action, at the very least.

“Reaching out to Dr. Clark at Peterson and Smith was a big step as far as getting definitive answers. Prior to that we had so many questions. When we talked to people we ended up with more questions than we started with,” Andrew said.

“Dr. Clark has been very straightforward and is not overlooking anything. She’s definitely putting limits on the horses and being very cautious.” 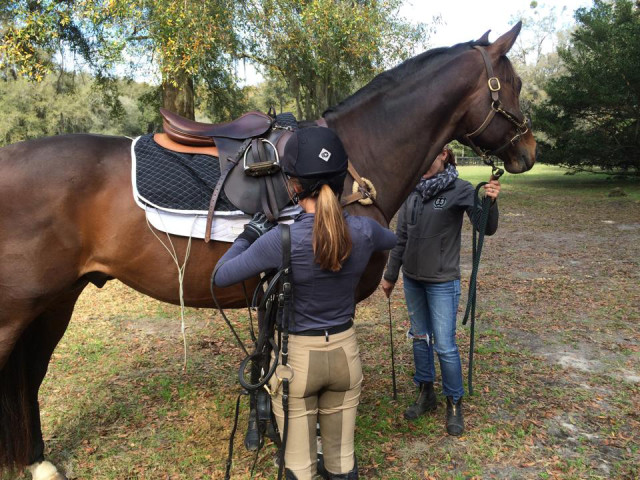 Tate prepares for his stress test. Photo by Ann Cottongim

While it is disheartening to have had Tate’s eventing competition plans stripped away for the time being, Anissa and Andrew are aware it could have been worse, as ingesting monensin can be fatal. Tate is a special horse with a bright future.

Anissa bought Tate’s dam, Tanzania (by Avignon II), when Tate was in utero. The last son of Onassis, Tate was born at Anissa’s farm, literally into her lap. She named him Tatendrang because he tried to stand before his hind legs were completely clear of his mother.

“His name is German. Loosely translated, it means ‘lust for life.’” Click to see a video of Tate taking his first steps.

Anissa foretold that Tate would be an American Trakehner Association approved stallion, and her prediction came true when Tate was 2.5 years old. He received 8s on all three gaits as well as for jumping and general impression at his inspection. Now he is gaining popularity as a stallion; he bred 18 mares last year including four in Europe. And although he is not technically approved with the Trakehner Verband, a breeder in Germany received special dispensation to breed two mares to Tate and register the foals – a huge compliment to the stallion and his owner.

When Tate arrived at Andrew’s barn for training at age 4, he immediately showed great potential for an eventing career. “You could see a lot of the talent right from the beginning,” Andrew said.

“He had a real knack and love for wanting to go out and jump. He tackled everything so easy. I had to remind myself he was only a 4-year-old and pace him. Everything I introduced him to he took in stride like he had been doing it forever.”

Andrew did not want to compete Tate at Preliminary level until he was six, so he campaigned in pure dressage shows. Tate made his international eventing debut at the Chattahoochee Hills CHC International CIC1* in 2013. He won that event, and the Area III Preliminary Championships prior to that, putting him on EN’s radar as a subject for the EN’s Got Talent series (Part 1, Part 2).

Tate won the CIC1* at Red Hills a year later, finishing on his dressage score, and completed four two-stars in 2014, including third at Chattahoochee Hills and completions at Bromont and Fair Hill. The last result on his record was an Open Intermediate win at Poplar Place in November.

“Cross country is so effortless for him. He’s fluid from start to finish, just smooth. He’s the kind that can run and ping off the ground. He has a lot of scope over fences but has a coolness about him as he goes.”

That coolness translates to the barn. Tate is a sweet and personable stallion. “It takes twice as long to clean his stall because he lays his head on your shoulder,” Andrew said. “The kids play with him. He loves kids.”

Through it all, he’s still Anissa’s baby. “He looks for me. He watches me,” she said. “I’m not allowed to touch other horses because he gets jealous.” 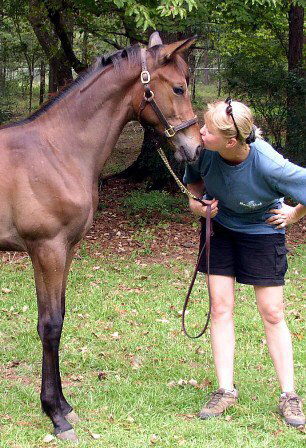 It goes without saying that the whole situation with the contaminated horse feed has been immeasurably difficult for the horse owners involved. However, the outpouring of support from the community is greatly appreciated.

“It helps us a lot knowing other people are pulling for us and sending good vibes,” Anissa said.

“The outreach has been encouraging,” Andrew agreed. “It’s a great community. They’re letting us know they’re thinking of us.”

Neither Anissa nor Andrew have been in further contact with ADM. “Everyone is very concerned that ADM is not responding at all. They’re just denying. For us that’s unbelievable,” Andrew said. “There has to be some accountability. Hold them accountable for the injuries, oversight and lack of response.”

The equine community agrees, and have voiced their opinions online. Many, also, have reached out to their own feed companies to find out whether the products they feed to their horses is safe. Eventer Elisa Wallace has gone so far as to discontinue her sponsorship by ADM, citing “disappointment with how ADM has conducted itself.”

If there is a silver lining, it’s that horse owners are educating themselves on what is in their horses’ feed, where it comes from and how it is processed. But there are still many questions to be answered. For one thing, why are even trace amounts of monensin acceptable in horse feeds? What are the long-term effects of monensin exposure? And what, if anything, is ADM going to do about this?