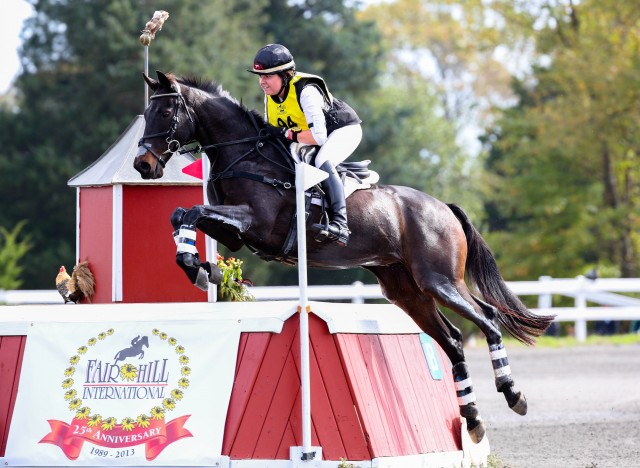 The big fall event of the U.S. calendar is rapidly approaching, folks! The Dutta Corp Fair Hill International will be held in Elkton, Md. from October 15-18 and the entries have just gone live. It’s going to be a very busy weekend, and both Jenni and I will be on the ground to bring you the best EN coverage there is.

In the CCI3*, we will see 73 horses and riders — a healthy jump from the 58 entered in 2014. 86 are entered in the CCI2*, which is down from last year’s 122 entries. Nevertheless, the field is a strong one and we’ll be bringing you our predictions and analysis in the coming days.

Buck Davidson is taking it easy in the CCI3*, piloting four horses this year. Lisa Darden’s Be Mine will be contesting his first CCI3* while Park Trader, The Apprentice and Wiley Post make up the more seasoned Davidson contingent.

Triumphant winners of the CCI3* last year, Jennie Brannigan and Cambalda will not be competing this year as they are slated to head to Pau in October. Jennie, however, has three horses entered including one, Candace Kircher’s Catalina, making her first CCI3*.

We’ll also see plenty of action from Marilyn Little, who has three entered in the CCI3*. Courtney Cooper has also entered both R Star (CCI2*) and Who’s a Star (CCI3*), having recovered from breaking her leg earlier this year. Jennie Brannigan has been catch riding Courtney’s horses during her recovery to keep them in top form.

It’s also an exciting time for Ryan Wood, who has a very talented string of horses, three of which will be tackling the CCI3* here. Frankie, owned by Steven and Kerri Guy as well as Ryan, will be making his first CCI3* start and McLovin, owned by Heather Sinclair as well as the Fernhill Classic Syndicate’s Fernhill Classic are also entered.

Matt Brown has one horse entered in the CCI2*, a new ride by the name of Talking Point BCF. This 8-year-old Irish Sport Horse owned by the Blossom Creek Foundation is a former ride of New Zealand’s Jesse Campbell and has two FEI starts with Matt under his belt.

You can take a look at the full list of entries here as we impatiently await one of the most exciting fall events stateside. Go Fair Hill!