Fair Hill is full speed ahead in its preparations for hosting a CCI5*-L event in 2020. Fair Hill International issued the following update in its most recent newsletter:

The earth is moving at Fair Hill! Construction began in earnest a couple weeks ago near the turf course where the Fair Hill Races just celebrated its 85th anniversary. The focus thus far has been on protecting the site from storm water run-off, as well as on the first of two retention ponds. The larger retention pond (pictured above) is slated to be finished this week, and will begin collecting water. The ponds will be used for site drainage, as well as the main water source for the new turf track’s irrigation system.

The entire project is scheduled to be wrapped up by the end of 2019 and will include three arenas in the infield; a new irrigated turf track with wider, more sweeping turns and all new turf; and a new CCI5* cross country course. 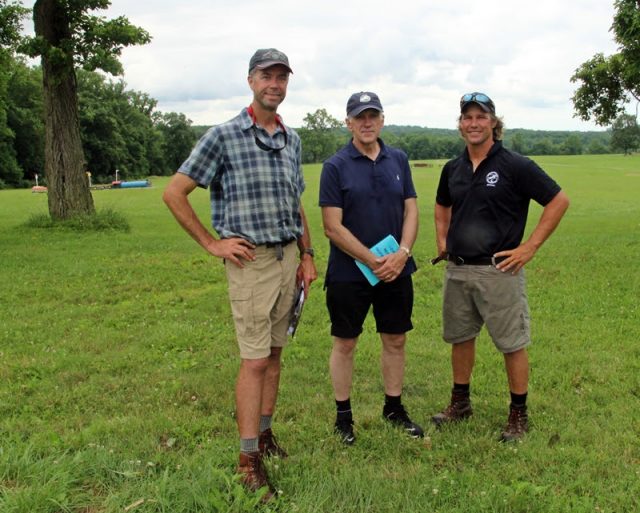 Stark, who made his final tweaks to his design last week during his visit to the site, is excited to be working with Bull and Rementer. The three of them walked the course for two days last week, discussing what landscaping needs to be done — there are ditches to be dug, mounds to be created, and several water complexes to be dug.

The CCI5* course will begin in or near the Main Arena in the infield of the turf track, will utilize FHI’s Saw Mill Field (currently used for horse trials throughout the year), and will finish below the Main Arena. Stark is designing the CCI3* track, as well, which will also run during the inaugural CCI5* event, currently scheduled for October of 2020.