We are saddened to hear of the passing of Jan Byyny’s first U.S. Team Horse, Shared Dreams. He touched the lives of many, and enjoyed a successful career and happy retirement. Jan shares his story. 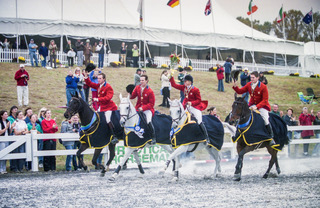 I want to let everyone know that Shared Dreams (“Whitey”) has died. He was 26.

Whitey came off the track and barrel raced before a young rider bought him and then sold him to my then husband, Craig Thompson, and me as a five-year-old. He was one of those horses that always looked old even when he wasn’t — a small, 15.2-hand flea-bitten gray. Originally he was Craig’s horse and then I took over the ride. He gave anyone confidence because he sought the flags, and if you got anywhere close to a jump, he would jump it.

Whitey almost died when we first got him; he had some kind of allergic reaction and collapsed. Dr. Nancy Carr, Craig and I spent all night with him, and in the morning he finally got up and never looked back. He was a cribber but he never cribbed on anything, and we thought he was narcoleptic because he would put his head in his feed tub and fall sound asleep. He was the most unassuming horse and I never thought he would really be anything, but he always showed up. He had an unorthodox jumping style, with his head straight in air, and everyone tried to change him but they couldn’t.

Whitey was the horse that got me on my first U.S. team. I qualified for Rolex in 2003 and Phillip said I should go to Kentucky, so I did. We jumped around clear, staying on the time, but the last three jumps I was so amazed that we had done so well I I started worrying I was going to make a mistake and pulled back a bit, causing 1.2 time. We ended 10th at both of our first Kentucky, and went on to the Pan Ams at Fair Hill, the last time they were held as a 3 (now 4)-star, where the U.S. won Team Gold and Whitey was individual Bronze.

Eventually, I sold Whitey to Katherine Shipley, who evented him for a while, and then he went to Maggie Sharp Carter, who competed Whitey and then was able to retire him at her grandparents’ beautiful farm in Kentucky. He was loved by so many and I was truly lucky to have him in my life. 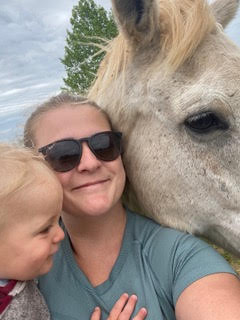