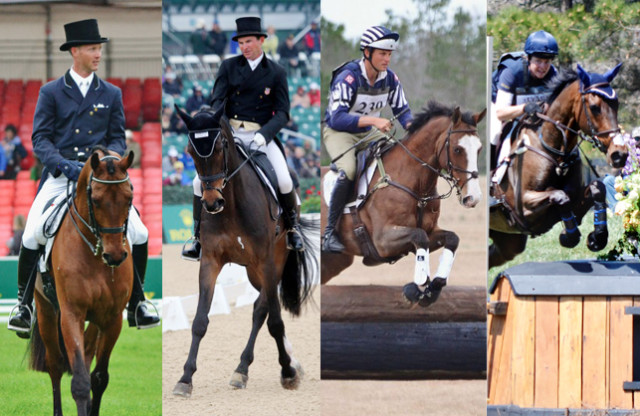 “When we really think about the Games, your primary way to go is through Kentucky or Jersey Fresh because of the time between those and the WEG. If that doesn’t work out and we need to adjust, we can work it out.” That’s what David O’Connor told the U.S. High Performance riders at least year’s USEA Convention.

But there are later selection trials on the schedule for a reason — because this sport is anything but predictable. And for four hopeful team riders — Phillip Dutton, Boyd Martin, Clark Montgomery and Lynn Symansky — it’s come down to those final selection trials to determine if they’re going to Normandy.

Clark is riding Universe this weekend in the Bramham CIC3*, the final selection trial in England, where he hopes to show the key quality the selectors are looking for in choosing the team — consistency. Selection Committee Chair Bobby Costello spelled it out this way: “For the riders who have showed good form, we want to see consistency with that form.”

Universe was incredibly consistent last season, posting good finishes at both Badminton and Pau, the latter of which is particularly notable since he went double clear over a Pierre Michelet cross-country course. And while Pierre’s WEG course will be very different due to the terrain in Normandy, that still has to count for something.

But the selectors have made it clear that what happened last year can only count for so much, and they need to see good form this season in order to name a combination to the team. Unfortunately, Guiseppe della Chiesa’s new cross-country track and particularly nasty English weather collided to create a perfect storm at Badminton, where little Buzz just couldn’t get around.

If Clark can recreate at Bramham that consistent good form he and Buzz showed last year, they still have a very good shot at being named to the long list, which will publish no later than June 20. A fluid, relaxed dressage test at Bramham will only further build their case for selection, as dressage is the only phase that stands in Buzz’s way of being a triple threat.

After their dominant season last year, I think we all assumed Lynn Symansky and Donner would be shoo-ins for the WEG team. But a small soundness issue in the form of fill in one of Donner’s ankles forced Lynn to play it safe early this year, forgoing the entire spring season to keep her WEG hopes alive.

She and Donner went through Jersey Fresh to get selected, but she fell off him for the first time in their long partnership at the water, banging herself up pretty badly in the process. Now she’s another potential team rider left scrambling at the last minute, going so far as to tightly wrap her injured leg inside a larger boot so she can compete at the final selection trial in North America at Bromont this weekend.

Boyd Martin came out swinging early this season. With Trading Aces sweating properly and thriving under his new fitness program, Olympic veteran Shamwari 4 coming into his barn and his own London Olympic partner Otis Barbotiere back to competing, it seemed like all the stars were aligning for a run at the WEG team.

But disaster struck at Carolina International, where Boyd badly broke his right leg, leaving him grounded with mere weeks to go before Kentucky. Considering eventers are famous for gritting their teeth and riding through pain, we all held out hope Boyd would be back in the irons for Rolex. But the injury proved to be too much to overcome, and he sat out at Kentucky and withdrew Otis before cross country at Jersey Fresh.

Now he’s another of our more experienced team riders making a last-ditch effort at selection through Luhmühlen, the final selection trial, which is next week in Germany. The good news is he told me yesterday both Otis and Shammie are “purring,” and his leg is getting stronger with every physical therapy session.

Boyd has ridden on our last two championship teams for the U.S. — finishing as the highest-placed American rider with Neville Bardos at the 2010 WEG in Lexington and serving as pathfinder for Team USA at the London Olympics before unfortunately pulling Otis out before show jumping due to an injury.

His experience would undoubtedly be valuable on the WEG team, and though he’s missed every selection trial to date, a good run with one or both horses at Luhmühlen would change everything. And don’t forget that Trading Aces has already shown very good form at a key selection trial, finishing in 8th place at Rolex with catch rider Phillip Dutton.

That creates an interesting scenario, as technically the selectors could naming Trading Aces to the WEG team with either Boyd or Phillip. Of course, such a decision would have to happen in cooperation with Boyd and the Trading Aces Syndicate owners. And it’s only really a consideration at this point because Mr. Medicott, easily the horse that would have anchored Team USA in Normandy, aggravated an old tendon injury at Rolex.

But that certainly doesn’t mean we should count out Big Phil. He’s ridden at every World Championships and Olympic Games — first for Australia, then for the United States — since 1994. Getting selected for teams is just what he does. After Mighty Nice tweaked a shoe at Kentucky, forcing his withdrawal, Phillip is re-routing Happy to Luhmühlen with the intention of doing just that.

Four very good riders. Five extremely talented horses. And a last ditch effort to get that ticket to Normandy. Good luck to Clark and Lynn this week and to Boyd and Phillip next week. Go Eventing.