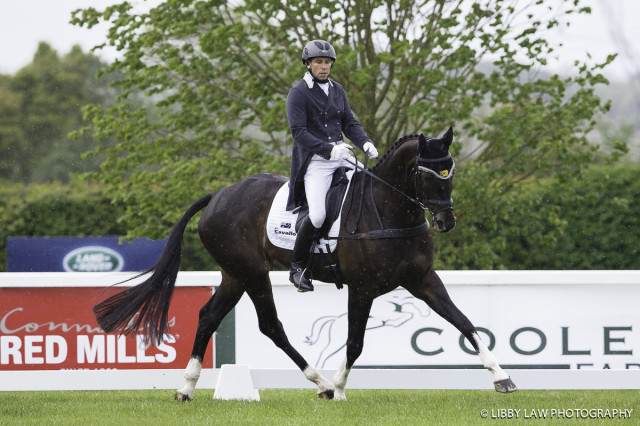 We are extremely saddened to report that Favorit Z, a 10-year-old Zangersheide gelding owned by Sue Brendish and Sam Griffiths, was euthanized after breaking his leg on cross country while competing in the CCI3* at Tattersalls International Horse Trials today.

“Today was a very sad day for us all, our beautiful Frodo (Favorit Z) broke his leg on the cross country at Tattersalls and had to be put to sleep,” the Griffith Eventing Team announced on Facebook. “We are all devastated. He was the most exceptional horse – incredibly talented, stunningly beautiful and above all the nicest person, so gentle and kind. Today we lost a dear friend and we are left with a huge hole in our hearts. RIP darling Frodo.”

According to a statement released by the event, the horse “stumbled and fell after jumping a Triple Brush at Fence 12B resulting in a broken leg.” Prior to the fall, the horse had a refusal at 9b, a brush corner in the water.

Sam Griffiths and Frodo were leading the CCI3* after dressage on a score of 36.1, a personal best.

Frodo began his FEI career at the CIC1* level with Belgium rider Constantin Van Rijckevorsel in 2011. Sam partnered with Frodo the following year and produced him through the two- and three-star levels with multiple top ten completions. Last year, Frodo was fifth at Blenheim CIC3* for 8- and 9-year-old horses and most recently finished 26th at the CCI3* at Boekelo in October. The horse has never before had a cross country penalty in an FEI competition.

We extend our sincerest condolences to Sam, Sue and the Griffiths Eventing Team for their loss.