What do you get when you combine an aviation engineer, a successful amateur rider and a galloping event horse? The answer, it seems, is the man who has made a massive contribution to the work of the FEI Eventing Risk Management Committee, and his name is David Vos. This article is made possible by the FEI and Louise Parkes. 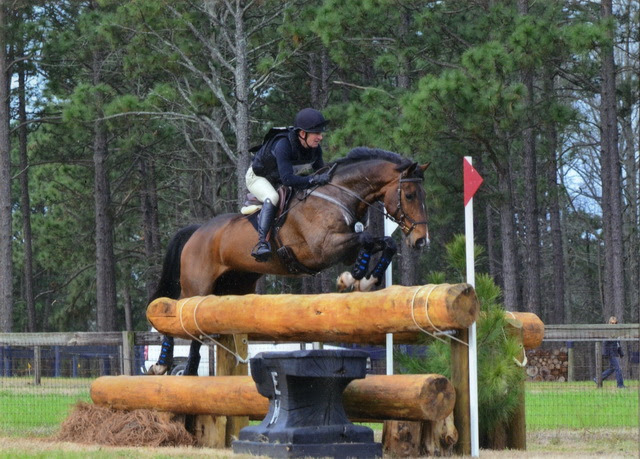 David describes himself as “an airplane nut” who was fascinated from childhood by aviation dynamics and controls. He only started riding when he was 40 years old, but he has competed up to the CCI2* in Eventing and his contribution to the creation of an updated standard for frangible devices for cross-country fences has been pivotal.

He’s passionate about improving safety. “We have to use all the tools at our disposal, including the people with a world of experience who have been in this sport for a very long time. You can never keep everyone perfectly safe, but we can do what’s necessary to make things as safe as possible if we take a responsible and disciplined approach”, he says.

As an athlete who came so late to the game, his integration into the Eventing Risk Management Steering Group took some time. “When you enter a new community no-one is going to listen to you”, he points out. It was through friends of his wife, journalist and entrepeneur Patricia Vos, that he was introduced to USEA Cross-Country Safety Committee Chair Jonathan Holling and it kicked off from there.

“I took videos of 2* and 3* horses running at Fairhill and began monitoring what the trajectory looked like and how the horses jumped.

“It evolved pretty quickly because that’s my specialisation area. I was surprised how little of that existed in the dialogue which was much more driven by trial and error and experience, but very little by theoretical physics – the dynamics of systems.”

Talking with someone who knows how to use mathematical modelling to explain and predict natural phenonema could be a bit like swimming through soup for some of us. But David balances the conversation with stories of his groundbreaking inventions, his love of nature and his pioneering work through the Vos Foundation which aims to ensure the diversity of life by planting billions of trees. And he talks about his horses too of course.

It’s not just his intellectual energy that shines through, it’s also his altruism and humanity.

Born near Capetown in South Africa in 1961 he has always been something of a free spirit, hitch-hiking around the beautiful countryside from the age of 11. “When I was growing up my two big loves were nature and aviation. Animals have always been very special to me, and today it really hurts to know that when I was a kid there were half a million lions in sub-Saharan Africa but today there’s maybe 30,000 or some tiny number like that”, David says.

His parents and his sister remain in South Africa while his brother moved to London in 1987. “We grew up in the apartheid era and hated our Government. I discovered very early on that good ademic credentials would be my ticket out of the country – basically the world hated us all so it was pretty hard to find a home”, he explains.

He seemed destined for a life in the aviation business. “There’s something magical about flight – my father was always into it and his brothers were pilots who flew in the Korean war.” Instead of becoming a pilot himself however he set his sights on a place at MIT (Massachusetts Institute of Technology) in Boston, USA and, at the age of 26, his wish came true. He made a big impact when, as part of his PhD project, he developed a unicycle robot in a laboratory that was also home to Marc Raibert and Robert Playter who went on to found the world-famous robotics company Boston Dynamics. It was the first step on the road to an extraordinary career.

He started small, working out of his own basement for several years before forming a company that went on to win contracts all around the world. “The unmanned aviation market was just beginning in the late 90s so it was perfect timing”, he says. In one of many research projects, he blew off 80% of a wing and tail of an airplane in flight and demonstrated how the automation system would just keep adjusting the aircraft so it could land successfully. It was ground-breaking stuff in the early days of drone technology, and by 2008 his company, Athena Technologies, was a hot property that was eventually bought by avionics and IT giant Rockwell Collins.

“I worked for them for four years as part of the contract and then left in 2012 and tried to hide away because I wanted to spend more time on our lovely 200-acre farm in Virginia where I had always felt I was just visiting. I wanted to immerse myself in the countryside and the animals, and to spend real time with my wife. I managed to do that for two years, but then Google found me through Patricia’s horse business and I ended up incubating their business on drone delivery service for two years”, he says. It was a real hit. “We delivered 1,000 burritos by drone and they wanted me to take it further, but that’s when I decided I was retiring for real!”

It was in the aftermath of the 9/11 terrorist attacks in 2001 that David was first introduced to the sport of Eventing, and he was immediately hooked. He and Patricia were living in Cape Cod at the time, and on that infamous 9/11 morning David boarded the third of the 8am flights out of Boston. The first two were hijacked.

“It was a bizarre day and I ended up stuck in DC for several months because the aviation world shut down and we were busy with my business there. Patricia came to visit me after being stuck in Europe, and she dragged me out of my office to go to this thing called a Horse Trials in Fairhill and I immediately decided I wanted to do it. In six months we packed up our Cape Cod property and bought our farm in Virginia”.

The first thing Patricia, who has spent many years re-training off-the-track racehorses, put in place was David’s trainer, American rider Jennifer Simmons. “It was a synergistic partnership because we used to sponsor her and bought her a bunch of upper-level horses over the years. She was a great coach for me”. But he admits he hadn’t the first idea what he was letting himself in for.

“When I started I thought you take one lesson, buy a horse and off you go. I had no idea it was a lifelong process of always learning, and and going through all the ups and downs with different horses and how easily they get injured. Maybe if I knew that ahead of time I mightn’t have started!”, he says with a laugh.

His first horse was lame within six months but lived out a long and happy life on the farm until passing away last year at the age of 27. “After that I bought any old horse as long as it was sound!”, David laughs again. A wild Trakehener/TB mare was followed by off-the-track Thoroughbreds, but it was a telephone call from US rider Will Coleman that introduced him to his most successful horse to date.

“Will said he’d seen a great Irish Sport Horse in someone’s back yard in England and that I should come and try it. So we combined a visit to Burghley in 2012 with going to see the horse along with Jennifer Simmons and Chris Hunnable”. It wasn’t love at first sight “he was more bulky that I had in mind”, but once David sat on him “I took a deep breath, and that was it”. The pair of them went from strength to strength despite some drama along the way.

“His name is Pablo (Spring Centurion) and he took me from Training all the way to the old 2* (now 3*) level. He was eight when I got him so he’s now 17 and I’m hoping to have him back in work again soon”. Pablo has twice ripped off part of a hoof – once out in the field and then in his stable – and he’s still recovering from that second incident. “But I’m a person that never gives up, so I’m still hoping he’ll come back!”.

On a business-trip to Ireland in 2016 he bought another horse, Apollo, as a four-year-old. “His mother is Irish and his father is German and he’s a super-nice guy!”, David says. He started working with Apollo after retiring for the second and last time in 2017. “I always wanted to train a young horse. It’s been a bit like the blind leading the blind but a whole lot of fun!

Asked how his aviation systems expertise segues into advising on Risk Management in the sport he loves so much – especially since animals are not machines and therefore must be less predictable – David says “that’s the interesting part! You’d be surprised when a horse jumps how the physics really dominates. There’s a cross-domain convergence of really high-tech physiology, psychology and human-animal relationships and it’s really cool!

“At Burghley in 2019 for example I worked together with British Eventing and the FEI and we had up to 25 cameras around the course and I could show how the physics and the video aligned with each other within 5% of accuracy. It gave us confidence in the methodology and in simple tests such as putting a kettle bell on a chain and swinging it at a frangible fence. Depending on the release heights you can very accurately determine the energy of the impact”.

Then we segue into talking about David and Patricia’s work in the Vos Foundation and the Trillion Trees project. “Right now our main drive is to significantly increase the publicity about tree-planting. We launched together with the Eden Project back in 2018 in Mozambique and so far around 20 millions trees have been planted and are growing and we are working with them and others to scale up the message.

“When you think about it, tree planting is the only known solution to mankind today to resolve our carbon dioxide problem. And all we have to do is plant one more tree for every three out there on the planet today. If we do that by 2030 we will buy probably as many decades as we need to bring online all the sustainable energy solutions the world needs to be able to have humans easily survive on the planet without driving carbon dioxide and global warming nuts!

“It’s incredibly exciting doing this simple thing – pushing seeds into the ground and letting nature grow them. All we have to do is help nature here and we can resolve this monstrous problem that we, as humans, have created.”

“To reach the top of anything you need fortitude and commitment along with solid doses of humility. There are awesome people everywhere and I’m a really big believer that most people are good people and want to do the right thing. The Eventing Risk Management Group is full of people like that.”