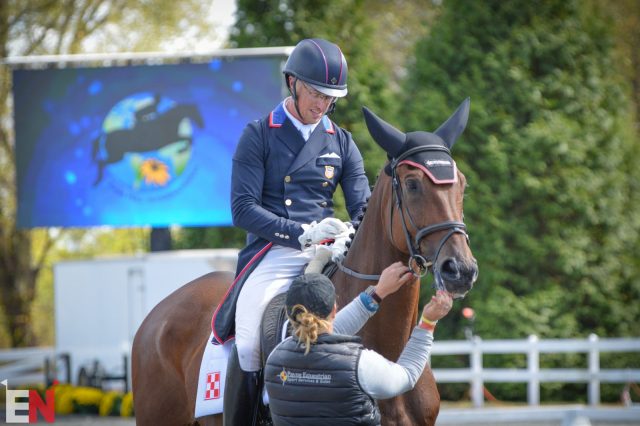 As a groom, sending your horse out of the start box on cross country day is all at once one of the best and one of the worst feelings in the world. You’ve spent countless hours by this horse’s side, caring for their every need and losing sleep over their routine, lest they fall off of it and suffer a drop in performance as a result. When that horse gallops out of the start box, the groom’s heart goes with it.

When Doug Payne and Vandiver came to grief at the Malting’s Oxers, a question that wreaked havoc on the field at Burghley last fall, head groom Courtney Carson found herself in the vet box area, lost with zero information on how to find her way to her horse and rider, the status of whom was also unknown.

You can hear the frustration at the memory seeping back up as Courtney recounts the tale of frantically looking for a modicum of guidance as to how to attend to the fallen horse and rider. There were no updates on whether or not there were injuries, and there was no information on how Courtney was to find the pair if they were in fact able to walk back to the barns. By the time Courtney was able to get the information she needed, she had to sprint back to the barns to meet Doug and “Quinn,” who were luckily no worse for the wear.

“That year at Burghley, there were a ton of horse falls, and yet back in the vet area we were given no information on the status of our horses and riders,” Courtney recalled. “Not only was it frustrating not to have the information, it’s also unsafe. What if the horse had gotten loose? Not just anyone could manage to get a five-star fit horse safely off the course and back to the barn.”

The experience left a bad taste in Courtney’s mouth, and it was far from the sole occasion that something of this nature had happened. 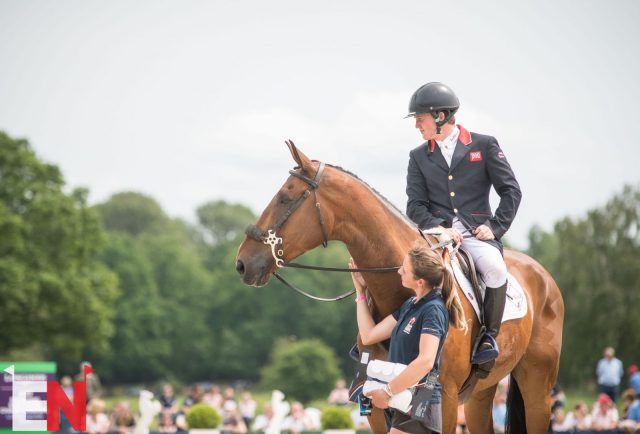 As a groom, you are tasked with the exceptional care of the horses in your charge. In many cases, grooms act as the rider’s right hand, helping them manage their time at shows and ensuring that every “i” is dotted and every “t” is crossed when the pressure is on.

And yet, grooms receive exactly zero representation in the majority of environments surrounding equestrian sports. No groom representative at shows. No organization dedicated to groom support. No recognition or accreditation through any governing bodies or federations.

So Courtney started thinking: How can events provide the best avenue of support for the hardworking grooms that, in the current state of affairs, often receive the least amount of help? Her short term answer came in the form of a Groom Liaison at, to start, FEI events.

“I talked to Marilyn Payne about the idea, and she suggested that I write a proposal that she could take to the FEI for discussion,” Courtney said. “So I wrote up the specifics of a Groom Liaison and what all this position would cover. I think it’s a great starting point for getting more support for grooms.”

You may have seen a survey floating about last month soliciting input from competition grooms. Many of the questions focused on the concept of a liaison or representative at shows. Early sentiments around the idea are positive, Courtney says, and had the spring eventing schedule not seen massive cancellations there would have been test runs of this position at Carolina International the The Fork. Now, these plans will move forward once the competition schedule is back in tact. 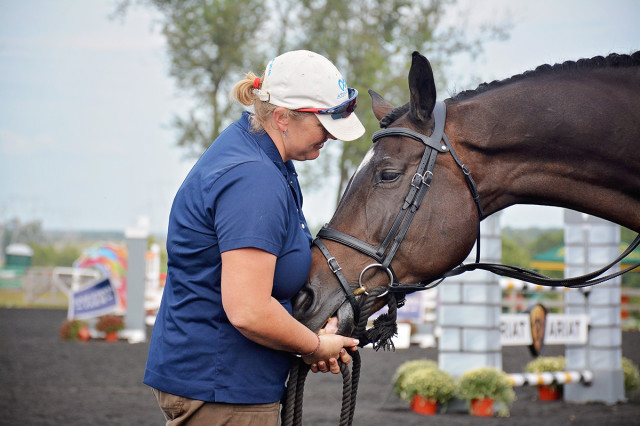 The Groom Liaison would attend rider meetings, meet with the Technical Delegate, and lead a groom’s meeting prior to competition to over important information. “Even just things such as where to find ice, where you can hand walk, and where to meet your rider if something goes wrong — these are all things that we need to know,” Courtney explained. “With group messages and WhatsApp, there is no reason why we can’t all be in communication and working together at each event.”

At the Ocala Jockey Club’s international event in the fall, Courtney and organizer Shelley Page did an initial test run. “I ran a quick groom meeting with Max (Corcoran), and about 12 grooms showed up,” Courtney said. “The next day, the start of dressage was delayed and the organizer sent me the text so I could start alerting people in the barns. It worked great — no one got on too early, there were no complaints, everyone was communicating.”

It’s encouraging progress for Courtney, who just wants to see more grooms getting the proper communication and information that they need to do their jobs well. Together with the British Grooms Association, which distributed the aforementioned survey, Courtney is continuing to work with event organizers and other grooms to determine the best course of action going forward.

Grooming is a tough life, and it’s not the best choice for everyone. Courtney has a vision for a better world for the industry – a job that’s easy to love but in many cases is not sustainable. The lack of proper training, advancement opportunities, and balance are things that make it difficult to attract more professional grooms.

“In this country, it’s such a rat race because there is not a lot of money behind it so unfortunately it means the riders work insanely long hours. Everyone has too many horses and not enough time and the people who are good at it do what three people should be doing,” she said. “How do you sell that to someone?”

By implementing better conditions and an organization that truly supports and nurtures grooms, Courtney sees a light at the end of the tunnel. A former upper level rider herself, Courtney gave up riding to work just as hard, just for another rider’s dreams. It’s tough, she says, but it’s work that she loves. And she wants others to love it, too. Just in a more healthy way.