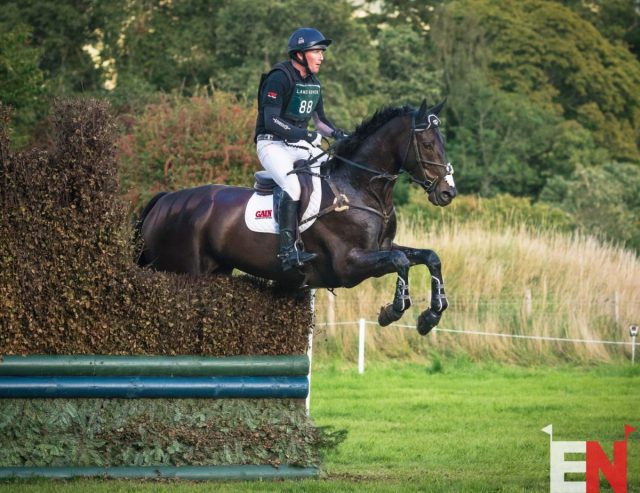 Oliver received a verbal warning for abuse of horse / excessive use of whip following an incident that took place in cross country warm up with Tregilder, an 8-year-old gelding who contested his first CIC3* at Blair Castle.

“The horse I was riding was developing a habit of running out, and he did so in the cross country warm up,” Oliver said in a statement. “I wanted to nip this habit in the bud by correcting him. I gave this explanation to the Ground Jury on the day, which they accepted. The horse performed well and is happy, healthy and now enjoying a break.”

Tregilder won the Blair Castle CIC3* on his dressage score of 33.5, the only horse of 46 starters in the division to make the optimum time on cross country.

FEI rule 526.1 defines Abuse of Horse as “an action or omission which causes or is likely to cause pain or unnecessary discomfort to a Horse included but not limited to: a) Rapping. b) Riding an exhausted Horse. c) Excessive pressing of a tired Horse. d) Riding an obviously lame Horse. e) Excessive use of whip, bit and/or spurs. f) Horses bleeding on the flank(s) or back indicating excessive use of the whip and/or spurs.”

The sanction at Blair Castle is the second verbal warning Oliver has received in 2018 for abuse of horse / excessive use of whip. He also received a warning following his use of the whip on Ballaghmor Class and Cooley SRS during cross country at the Mitsubishi Motors Badminton Horse Trials in May.

The list of FEI sanctions in eventing can be viewed on the FEI website at this link.