There’s still another day of Blair to go, and I’ve already typed a certain Yorkshireman’s name so many times that all of my devices autocorrect any disyllabic word beginning with ‘t’ to ‘Townend’. On the hunt for some stronger teabags? Apparently stronger Townends are what’s in my basket. Run out of towels in the temporary lodgings? No Townends to be found here! I’m seriously considering dusting off ChinchBot and getting him to write this piece, because it’s about to go exactly the way you’d expect.

But don’t click out of your browser tab just yet, readers – despite his 1-2-3 stronghold after yesterday’s dressage, Oliver Townend didn’t take the obvious route to the win. In fact, he pressed the start button, went back to his home screen, clicked on ‘expert mode’, and became the only person to ever win the Sims, or something.

You see, if you’ve been following along thus far, you’ll know that Townend had five horses in this class – four-star winners Cooley Masterclass and Ballaghmor Class, Badminton runner-up Cooley SRS, experienced four-star mount MHS King Joules, and three-star first-timer Tregilder. The former four sat in 1st, 3rd, 2nd and 6th, respectively, cutting what looked like a clear path to the win – but for a little event in Lincolnshire next week. Those four horses make up 80% of his Burghley entries and, though he can only bring forward three horses next week, he announced yesterday that he planned to withdraw them all after showjumping today. And so, rounds jumped and legs stretched, they were withdrawn. It was all on Tregilder, now sitting in 9th place after producing one of only eight penalty-free rounds in a 46-strong field, to tackle the cross-country and bring home the glory.

When he did? Well, it took even Townend by surprise. 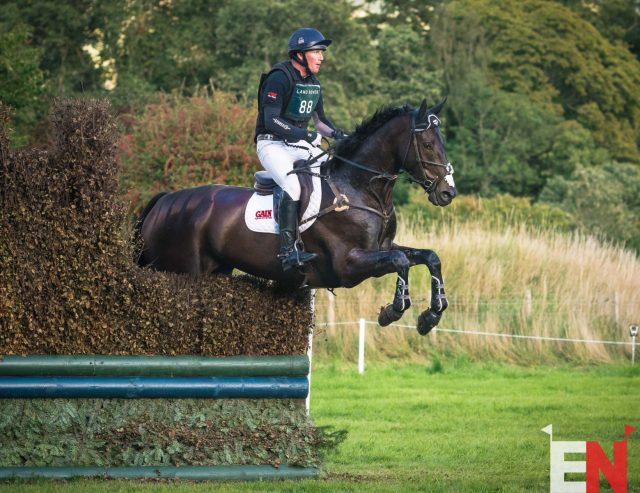 “He was just unbelievable – just a different league, gallop-wise, everything-wise,” said Townend of the eight-year-old gelding, who is jointly owned by Stephen and Victoria Hazeldine and The Mitchell Fox Group. Tregilder was the lowest-placed of Townend’s five entries in this class after yesterday’s dressage, where he posted a 33.5 to sit twelfth overnight. But clear rounds inside the time meant that he not only took the victory in the CIC3* class – he was the only horse to finish on his dressage score, too.

“I didn’t expect this result at all; I just came to give him an education,” explained Townend. “But then, when he went into the showjumping, he was such a professional. He knew where the pole was every time, he knew where his legs were, and he let me help him out and take charge when I needed to.”

This game attitude, and the horse’s ability to take direction as needed, proved a boon on the cross-country course too, which Townend described as “one of the toughest CIC3* tests I’ve seen”, citing the hanging log and angled hedges at 15AB and 16 as one of the trickiest questions.

“That, to me, was a championship question, and nigh on overboard for this level,” he said. Despite this, Tregilder took the testing three-star in his stride, making easy work of his debut at the level. “The horse has had some run-outs recently [in the CIC2* classes at Barbury and Floors Castle, and in his prep run at Gatcombe Intermediate], and so I didn’t check my watch – instead, I gave him time to breathe up the hill and just pushed him up a gear every time he jumped a skinny. I couldn’t believe it when I crossed the line and looked at my watch, but I think with a bit of experience on his side he’d have been 15 or 20 seconds faster.” 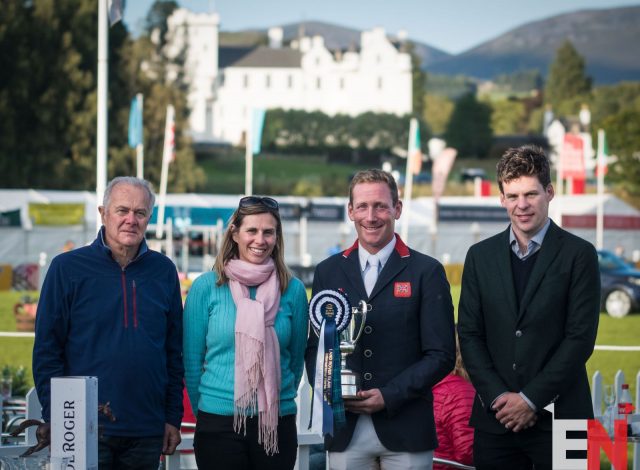 Oliver Townend accepts a plethora of prizes for his decisive victory in Blair’s CIC3*. Photo by Tilly Berendt.

The horse’s end-of-season plans remain unconfirmed, though, as Oliver points out, the 8/9 year-old CIC3* class at Blenheim is an option.

“I never thought I’d be available for Blenheim this year, but now it turns out I am,” he said with a wry smile, referencing his recent omission from the Great British contingency for the forthcoming World Equestrian Games. “But all that said, I’d be happy to put him away now and let him finish on today’s result – it’ll come down to what his owners want to do.”

Townend was quick to credit the horse’s owners as well as his breeders, the Leicestershire-based Preci Spark: “I’m thrilled to be able to fly the flag for them; they’re doing brilliant things for British breeding,” he said.

Fellow British rider Piggy French clinched second place with new ride Brookfield Inocent, previously produced and piloted by British-based Australian Kevin McNab. After Townsend’s spate of withdrawals, French and the nine-year-old gelding, owned by Alison Swinburn and John and Chloe Perry were the de facto leaders going into the final phase. They looked set to win it, too – but for the addition of 7.2 time penalties, which shifted them below the leaders onto a score of 35.1. 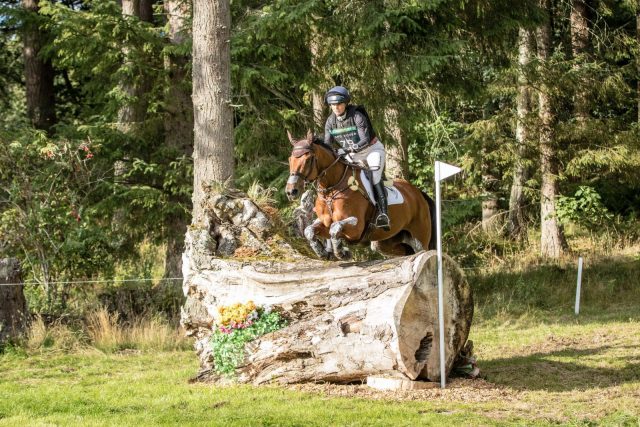 The pair won Somerford Park’s CIC2* last weekend, making their three-star debut as a team in this weekend’s competition.

“He’s a really cool horse and this makes two good runs within a week – he’s a new horse to me, but Kevin has done such a wonderful job,” said a delighted French. “He’s always been run quite slowly, to work on building his education, but I’ve been finding that running him a bit quicker seems to make him braver. Sometimes changing a horse’s way of going can bring out all sorts of niggles – I’ve had that before when I’ve taken on new rides – but I wanted to give him a solid performance today to walk away with.”

French opted to take the long route at the final water at 19, the direct option of which features a replica of Forth Bridge atop a steep mound, which added expensive seconds but created a positive, educational experience for the up-and-coming talent.

“He’s had a couple of problems looking into ditches, so I went for the alternative,” explained French. “He’s a really exciting horse, and one that I’m looking ahead with, although he’s very tight and spooky when he goes into the arena for dressage and showjumping, so that’s just taking a bit of figuring out.”

French, who next heads to Burghley with Vanir Kamira before flying to Tryon for the WEG with Quarrycrest Echo, also heads the CCI2* aboard Jennifer Saunders‘ Cooley Monsoon. 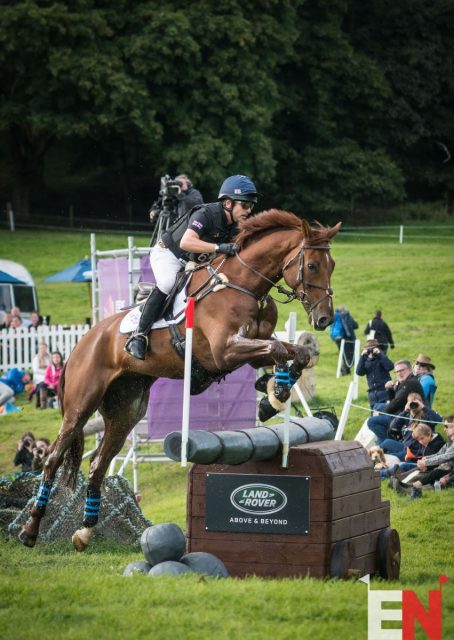 Ben Hobday and Shadow Man II: “he’s everything I’ve ever wanted in a horse.” Photo by Tilly Berendt.

Ben Hobday and his 2017 Young Horse World Championships mount Shadow Man II looked formidable across the country today, adding 8.4 time penalties to finish in third place on a score of 37.8.

“I really want to win one of these – I’ve not won a three-star yet, but it makes you even hungrier when you’re up there with the big guys like Piggy and Oliver,” said Hobday, who exulted in his young horse’s impressive performance over the past few days.

“He’s only an eight-year-old and there’s plenty for us to work on, so hopefully we’ll be on top soon. I’m hungry and he’s got it in him. I need to work on getting him a bit more supple; I thought his test was actually better than the mark [29.4] suggested, but I was so happy with him in every phase. He galloped as quickly as a young horse deserves to; I just love him, he’s everything I’ve ever wanted in a horse.” 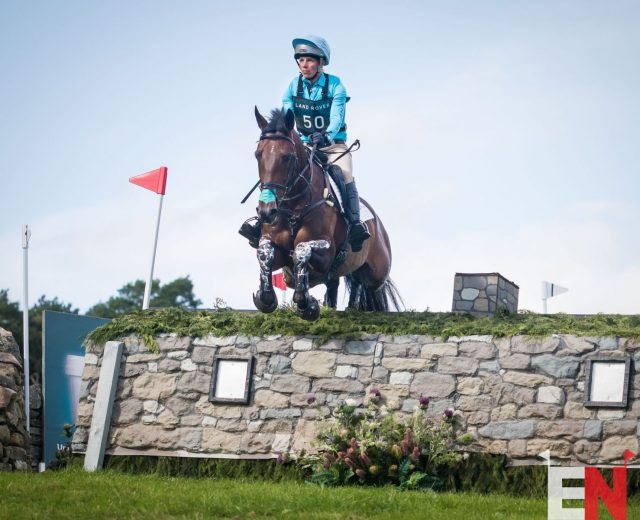 Today’s jumping phases saw a sweeping change across the leaderboard, with just eight fault-free showjumping rounds out of 46, and 20 of the 37 cross-country starters finishing without clocking up any jumping penalties across Alec Lochore‘s tricky course. Tomorrow’s ERM competitors will tackle the same track, so we could see a huge change not only across the leg leaderboard, but in the fight for the series, too. 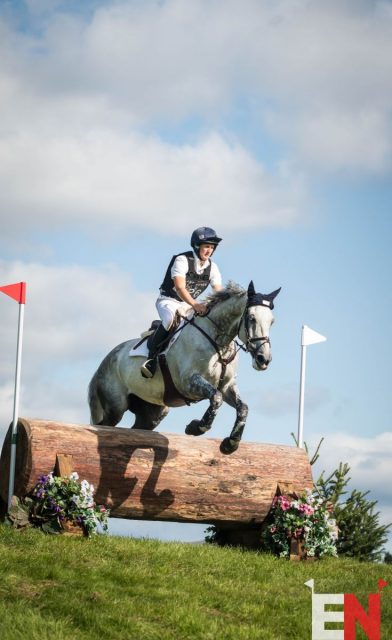 Tom McEwen and Strike Smartly lead going into the final phase of the CCI3*. Photo by Tilly Berendt.

The CCI3* cross country was considerably less dramatic, with 22 of 24 starters completing the long track and only six combinations picking up jumping penalties. First-phase leaders Tom McEwen and Strike Smartly added nothing to their dressage score of 26.9 to stay at the top of the leaderboard at the conclusion of today’s competition. 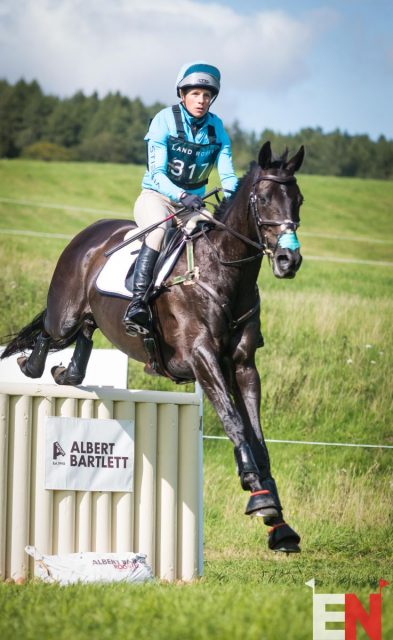 The top three overnight – Tom on Strike Smartly, Izzy Taylor on Director General, and Tim Price on Pats Jester, recorded the only three double-clears of the day, but go into showjumping without a pole between them. We’ll bring you everything you need to know from tomorrow morning’s final horse inspection, before delving into the exciting final phase of the competition. Stay tuned!

The top ten in the CCI3* following today’s cross country.