It has become increasingly obvious in recent years that, when it comes to the WEG, something’s gotta give. It’s one of those ideas that is all warm and glow-y in concept — athletes and fans from around the world singing “kumbaya” around the campfire of equestrian sport! — but dangerously flammable in execution.

In an unprecedented admission that maybe (just maybe!) the current WEG model has some “problems,” the FEI commissioned a third-party strategic review of the Games post-Normandy (you can read the executive summary here).

The agency that compiled the report, The Sports Consultancy, lays it all out there, starting out with an outline of recent muck-ups (the gaping money hemorrhage of WEG 2010, the logistical nightmare that was WEG 2014, the pulling-of-teeth bidding process for WEG 2018, etc.) From the intro:

The FEI recognises that, as a result of these challenges, the Event risks becoming unsustainable and questions have arisen from a number of sources about its future. Should the FEI World Equestrian Games™ continue to exist? If the answer is yes, how can it sustain and enhance its attractiveness to its stakeholders?

Consequently, the FEI has commissioned a strategic review of the FEI World Equestrian Games™ to deconstruct the Event and understand what, if any, changes should be made in order for its flagship event to remain an attractive proposition and grow into a truly global major event.

Clearly we’re not the only ones who’ve been pondering the WEG’s future — or, potentially, lack thereof. Here’s a quick-and-dirty rundown of the problems the agency identified based on hundreds of interviews with spectators, stakeholders and event officials, and their recommended solutions:

“The event format is too expensive and too complex.”

Proposed solution: Keep the eight disciplines but cut competitor numbers. Shorten the length of the event (they recommend 9-10 days) and reduce the number of venues (no more than 3-4 within close proximity to one another). Also rein in superfluous expenses like insanely over-the-top opening/closing ceremonies. 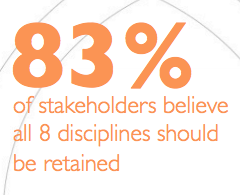 Problem: Nobody wants to be the host.

“The sheer scale, associated cost and required independent / public sector investment is preclusive to the majority of prospective hosts … Bidders want more information during the bidding process and, crucially, also want the information contextualized and explained.”

Proposed solution: Well of course no one wants to be the host. (1) No one likes losing money hand over fist and (2) the bidding process is insanely daunting. Maybe if we give bidders a little support — wine and dine them instead of shutting them down completely — more countries will invite us over to play. 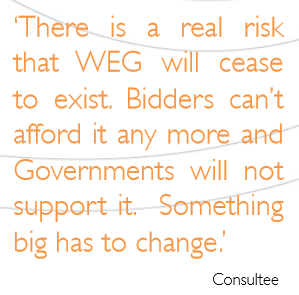 Screenshot from the report

Problem: The sponsorship situation is a mess.

“The current sponsorship model is overly reliant on a single title sponsor, leading to an imbalance in presence and influence.”

Proposed solution: Move away from the title sponsor model to one that secures 5-7 equal partner sponsors. Not only would that increase and diversify the revenue stream, it ensures that, should the title sponsor wake up one morning and decide to take their money elsewhere, the WEG isn’t screwed completely. 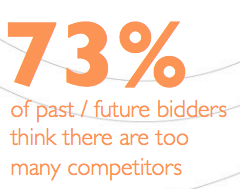 Problem: When the WEG looks bad, the FEI looks bad.

“Some of the negative feedback in Normandy was incorrectly directed at the FEI.”

Proposed solution: Maybe it was their fault, maybe it wasn’t, but pointing fingers elsewhere is never an effective (or flattering) strategy. Instead, the report recommends that the FEI embrace accountability and take control of their event. 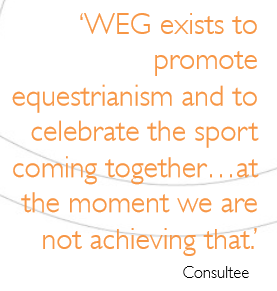 Screenshot from the report

“The consultation made it clear that the competition has becoming slightly boring (even to established fans), less attractive to broadcasters and inaccessible to new fans.”

Proposed solution: Time to up the razzle-dazzle factor, cutting out boring “non-essential compulsory elements” and re-imagining the event format in a way that’s entertaining, engaging and TV-friendly. (Although renaming the sport of eventing, er, “equestrathon” may be taking things one step too far.)

Kid gloves, off! You can read the executive summary in its entirety here.

Turning your flagship event over to a third-party consulting agency for extensive review, then publishing the hard-boiled results for all the world to see, is a risky move, and the FEI hasn’t historically been known for its transparency.

With its new leadership in place, we’re hopeful that this isn’t a one-off but the start of a paradigm shift that will realign equestrian sport’s governing body with its constituents. We all want to see a healthy WEG in the future, whether in its current format or a revised one. Thank you, FEI, for getting the fire started.