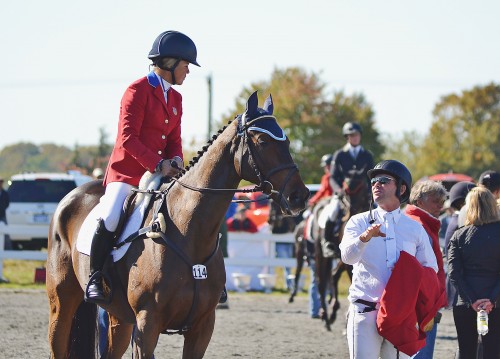 In the spirit of my quick press conference report from yesterday, here are the most interesting tidbits from the CCI2* and CCI3* press conferences at Fair Hill. Thanks to everyone who followed along with my coverage this weekend. It’s going to be an exciting week as we switch our focus to Pau, where Kate and I will be tag-teaming coverage to bring you all the information we possibly can on the seven Americans and four Canadians contesting the CCI4*. Go eventing.

1. There was hardly a dry eye in the house this afternoon when Jan Byyny clinched the win in the CCI3* with Inmidair. Jan has overcome so much since her life-changing accident in 2010, and it was incredibly touching to see all the riders rally around her and root for her. And no one wanted this win for Jan more than Buck, who would have won had she pulled another rail in the show jumping.

2. Confession: I’m a big softie, and seeing Buck so emotional in the press conference really got to me. “The reason I’m in this sport is because of Jan, and the reason I almost left is because of Jan,” Buck said in a very honest moment. Jan came to work for Bruce Davidson when she was just 17, and she schooled Buck’s ponies for him, ultimately playing a big role in helping him catch the bug for eventing.

3. Buck had an up-and-down day, as Wiley Post refused twice at the first jump in the CCI2*, leading to elimination. When asked how he put that out of his mind to deliver a double clear trip in the CCI3* with Park Trader, Buck said, “I do it every weekend. I fall off some, and I win some. As soon as I lose, I forget about it, and as soon as I win, I forget about it.”

4. Fair Hill is Allie Blyskal-Sacksen’s hometown event, as she grew up five miles away and used to hack on the grounds in her Pony Club days. She started out volunteering for the event and graduated to grooming and working in the vet box, and now she’s won the CCI2* with Sparrow’s Nio. Talk about a Cinderella story, right?

5. Allie and Neo pulled seven rails at Jersey Fresh this spring and delivered a double clear trip today, so what changed? After Jersey, Allie put a video camera in her husband Sam’s hand and had him record her jumping over and over again until she figured out what she needed to tweak. I’d say the strategy worked.

6. And in another interesting tidbit, Sam Sacksen, Allie’s husband, competed in the 2008 Beijing Olympics in modern pentathlon. Allie said having someone on her support team who understands competing at a high level is extremely valuable. “I don’t need a lot of coaching,” Allie said. “I just need someone to tell me to sit tall.”

7. The last thing Allie thinks to herself when going into the ring for show jumping: “Don’t puke.” That’s because she actually went through what she affectionally calls a puking phase, in which she narrowly missed a few ring stewards. The good news is she’s got it under control now. Mind over matter?