EN guest writer Doug Payne successfully competes at the highest levels of eventing and show jumping, and today he's kindly sharing some of the wisdom he's learned as a student of both worlds. Follow DP Equestrian on Facebook here and check out his blog for much more from Doug. 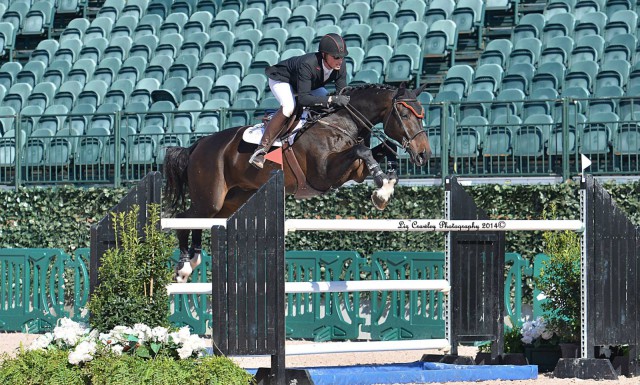 I am a self-confessed nerd who enjoys passing idle time thinking. Lately, I’ve been thinking about the debate on whether to look for a distance or not while approaching a jump, which has been a hot topic for sometime. As I see it, there are two major ways to divide the proponents and their respective positions.

On one side, you have the long-established riders and instructors who’ve been incredibly successful and, most often, primarily taught in the era roughly ending in 1990. They hold the “old school” view that the distance should not be “looked for,” nor should strides be counted.

On the other side, you have the more modern group that honed their skills in the years following 1990 and advocates counting strides and seeking the ideal distance.

You can also easily divide the debate between those who were brought up in the jumper world and those who weren’t. The jumpers have distance and striding drilled into their heads from day one. They are die-hard stride seekers, a quality which certainly can have its limitations, especially on cross country.

I have an interesting perspective being that I was initially never taught to count strides and wasn’t bothered by the distance I took off from the fence.  I didn’t want to be a mile off, nor underneath the jump, but anything within that middle 50 percent window was acceptable to me. 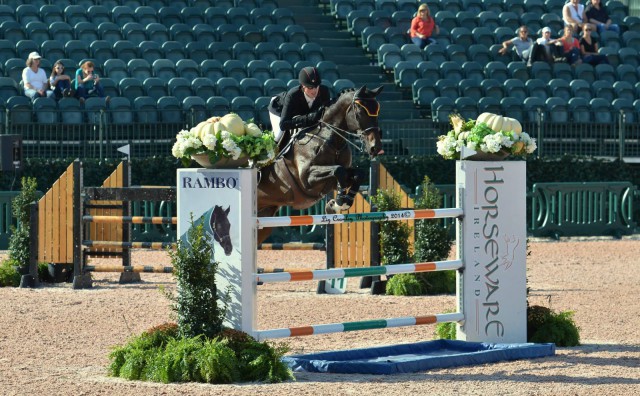 I grew up concentrating on keeping a line and energy but, again, without much attention paid to the remainder of the details. I ran my first Advanced event at 18 years old without a clue or concern about distances.

In my 20s, I had the opportunity to develop a horse that in the end carried me to my first Grand Prix. With the help of Anne Kursinski, who remains one of my greatest mentors, I was shown the importance of accuracy, attention to detail and placement, and most importantly, to arrive at the appropriate distance by riding forward to it.

Frankly, my first few lessons were rough! I couldn’t get the right striding in the lines or a consistent distance to save my life. While it’s still to this day a work in progress, I’ve now had a number of horses successfully jumping up to 1.60 meter (5’3”) in Grand Prix classes.

This past week, I was schooling Eli, my current Grand Prix horse owned by Mike Rubin, and it dawned on me. Not only is it important to be accurate just because he’s jumping such height, but that accuracy is necessary when reaching the upper-most limits of any horse’s scope.

As eventing naturally becomes more technical in both cross country and show jumping — and the show jumping heights increase — riders are more likely to use a greater percentage of the horse’s available scope. Thus, accuracy becomes a more critical skill to be a successful event rider. And varying ground conditions also play in — the softer the going, the more scope I want for room to spare!

How does this apply to the lower levels? I think accuracy can play a very influential role. If you happen to be competing at the novice level (2’11”) and, at most, your horse is capable of clearing a 3’6″ fence, you have 7 inches of scope to play with — that 2’11” fence leaves 7 inches or 17 percent of his scope remaining.

In this example, a few inches too close or too far from the base probably wont affect your score; however, if your horse’s maximum effort would only clear a 3’3” jump, then that accuracy becomes much more influential — that same 2’11” jump leaves only 4 inches or 9 percent remaining scope to spare. As that window is tightened down, run outs, falls and rails become more and more likely, especially in poor conditions.

So why were so many event horses and riders of the past so successful without focusing on the take-off location when Grand Prix jumpers have been looking for a distance for years?

I think there are limitless factors, the most significant of which is that technical demands and heights were lower on both cross country (and without today’s prevalent use of stiff brush on fences, which can be as high as a small Grand Prix at 1.45 meters or 4’8″) and show jumping. Ultimately, the takeoff window needed to jump clear was larger, hence that last bit of accuracy was not needed in order to be successful.

All of this said, without focus on the quality of canter, line, balance and energy, riding accurately to a jump is impossible. It is not just the location where the feet leave the ground that’s important, but that the rider is able to get there without any drastic changes to these components within the last handful of strides.

One can very easily become obsessed with getting the correct number of strides in each line in competition. I think it’s much more important to walk the course and understand how all of the lines relate to each other — i.e., the first line is slightly short in five strides, the second is long in four strides, etc.

When riding the course, count the first line and consider how it rode compared to how you thought it might, and then factor how it relates to the remaining related distances. For example, if the slightly short five-stride line rode as if it was completely normal, then I very well might alter my plan to ride the second in a steady five rather than the four I had planned originally.

This way you have a heads-up as you ride, understanding what traps may lie ahead and how to prevent needless rails. There’s no need to be reactive when you can be proactive.

I’ve certainly made the jump from a non-counter to a counter, but I also always keep in mind that the quality of the canter, balance, line and energy are paramount! Ultimately, when you have those taken care of, the distance just seems to appear; if not, you’ve got the tools to do something about it. There’s certainly no reason not to make your horse’s job easier!