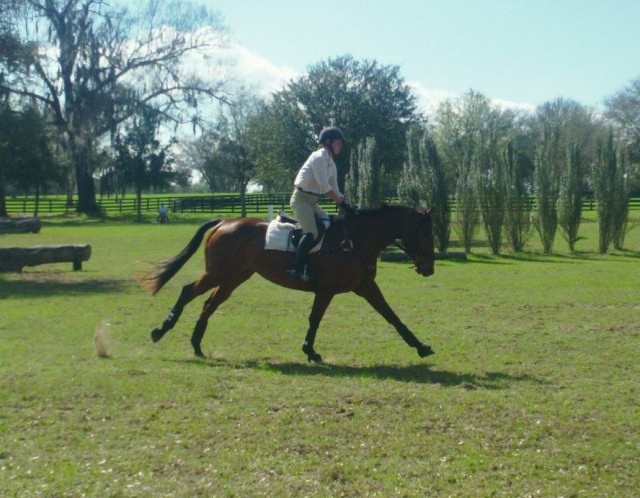 While Monday primarily focused on Future Event Horse judging and conformation at the USEA Young Event Horse Seminar [Day 1 recap], Tuesday’s session was all about the Young Event Horses and under saddle performance. The day began with a lecture and presentation from Maren Engelhardt dissecting the biomechanics of a horse’s gallop. Many videos were shown of Bundeschampionate competitors on cross country, and the audience was encouraged to score the horses’ gallop. It was interesting to note a few stand-out horses, such as Michael Pollard’s Halimey and Andreas Ostholt’s So Is Et. At age 5 or 6, they had an amazing gallop, and it’s no wonder they are on their way to being very successful. Other horses were not so apparent. Participants universally agreed that a 6-year-old gray mare was less than impressive, and a big dark bay gelding just didn’t seem very effortless. Those two horses turned out to be Schoensgreen Hanni and Michael Jung’s European champion, Halunke. It just goes to show — you can only evaluate what you see on the day, and you never know what horses can develop into!

What to look for in a good gallop:

After the morning lecture, the group headed to Longwood to watch a few horses jump. Marilyn Payne wanted to discuss jumping technique and style, so a simple gymnastic was built for a group of 5-year-olds (with one 4-year-old). Michael Pollard rode a very, very nice homebred that universally wowed the audience. The horse showed incredible scope, technique, power and attention to the fences. He knocked a rail once on an oxer; Marilyn noted that one rail doesn’t matter — what matters is how the horse jumps the fence after that. The next pass through, Michael’s horse jumped out of his skin, kicking his hocks up over his head. That was worthy of a 9!

Marilyn and Robin Walker repeatedly stressed that a mistake at one fence does not matter. We watched a 6-year-old horse school some cross-country fences to evaluate his style and gallop. Out of five jumps, the horse showed poor form over three of them, particularly at deep distances. Robin said this should send big red flags as a judge (and as a trainer!). One mistake is certainly understandable for a young, green horse; recognizing and fixing the mistake demonstrates a horse with good learning ability and sharpness. Repeating the same error will result in a significant markdown in score. Just as in the dressage, it’s important for the judge to realize what caused the horse’s problem. A rail or a stop is not immediate failure; that horse could still be competitive if it was merely greenness that caused the error. If the horse shows remarkable talent, he will receive appropriate scores despite a mistake.

During the lunch break, the group went to Meredyth South (the O’Connors’ neighboring farm) to watch a bit of the High Performance Training Sessions. New show jumping coach Silvio Mazzoni worked with Ellen Doughty and Sir Oberon, though it was tough to hear any of what was said. Ellen and Obie worked on her approach to combinations, particularly a two-stride triple. It appeared Silvio was encouraging Ellen to have a sweet spot in her canter approach, not too fast and not too over collected. When she had just the right canter, the jumping looked so easy and effortless for Obie.

Next, David O’Connor coached Marilyn Little through a short cross-country school with 2013 USEA Mare of the Year RF Demeter. Marilyn and Demeter looked great over corners and skinnies. David really encouraged her to ride the mare straight (“No bend!”) on the line to a corner and “freeze” her hands for straightness from several strides away. Marilyn finished up at the water, where David worked on her position dropping into water. The spectators were situated some distance away, so listening to details was tough, but it appeared David was trying to break Marilyn’s habit of tipping forward down the drop. Instead, he wanted her to push her belt buckle forward, bringing her shoulders back, allowing for better balance on landing. Karen manned the iPad for direct video feedback so Marilyn could see the difference in herself. Demeter looked quite sharp for what was probably her first cross-country school of the year, and I bet she’ll have another great season in 2014.

After lunch, the seminar continued with more evaluation and discussion. This time, the judging participants came up with a YEH course, using three show jumps and the Longwood cross-country schooling fences. Five 5-year-olds completed the course, and the seminar group collectively debated scores for each, starting with the horses’ show jumping style and ability, then moving on to cross-country style, jumping ability, rideability, gallop and overall impression. Marilyn noted that when judging, you will have to compare your class of horses somewhat: If you give one horse an 8 and a later horse is just a bit better, use decimals like 8.4 or 8.7 to provide appropriate separation between them. While we want judging to be as standardized as possible, some variation among different judges will always exist; the hope is that it will be within about a point one way or the other. So long as decisions are justifiable and proportionate, it’s okay to support your opinions with a score you feel is earned.

Regarding overall impression, Marilyn suggested to have a standard in mind that a “6” is a preliminary horse trial horse. A “7” is a successful CCI* horse; an 8 a CCI** horse; a 9 would be a CCI3* horse; and a 10 is a CCI4* horse. Most of the group consistently agreed on the one-star type horse versus the Advanced-potential horse. Sometimes the 7/8 line was a little blurred between participants, but that’s where the tenths of a point can be helpful.

One horse showed a very, very nice gallop; no one quite wanted to step up and award a score, unsure of what we just saw was really that good. A shy “8.5?” was whispered. Maren Engelhardt challenged the score, saying, “Why not a 9?”  No one could quite come up with the answer — there was balance; the horse covered a lot of ground effortlessly; the speed was obvious; it was powerful … so yes, it deserved a 9.  I thought that was an interesting way for judges to think; instead of hyper-focusing on what could be better, consider rewarding all those strengths if the quality is enough to earn a top score.

On the first day, David O’Connor mentioned that a four-star horse must have a fifth gear: an economical cruising speed, maintainable even after 10+ minutes. A top, athletic horse can get around Advanced with some lost efficiency, but it must have an extra gear to go clean and fast over a four-star course. Robin challenged the group, “Does this horse have a fifth gear?”  If the answer is yes, the gallop score should be near the 9 range for sure.

While many of the participants at the seminar were interested in becoming judges for the FEH/YEH program, I was soaking up knowledge to better help me select upper-level event prospects and know how the development program functions. I was a little disappointed that more riders did not attend. I learned a whole lot about how to prepare and perform the Young Event tests. Here are some pointers:

1.  Show your horse to its advantage! On the flat, try to produce the best possible gaits your horse has, even if he can only show it for a few strides. Judges are trained to look for that potential and reward it, but they can’t make it up; it has to exist on the day you’re judged.

2.  Post the trot. Ninety-nine percent of horses aged 4 to 5 will not show their best trot when the rider sits. Rising trot will free up the back, produce more swing and give a better score.

3.  Don’t sweat the mistakes! Judges are on your side; they are real horse people. They understand green horses aren’t perfect and will have baby moments. It’s OK; show them how your horse can improve off the mistake.

4.  Ride smart.  Don’t be stupid in an attempt to show a horse’s bravery. Four-year-olds are allowed to trot some fences, so if you need to trot to maintain your horse’s confidence, do that. If the bank is scary off a sharp turn, it’s okay to trot and let your horse assess the question to answer it correctly. Trying to stuff him in a canter, surprising him and causing him to jump poorly (or stop) doesn’t help you. Racing at the fences does not equal boldness!

5. All horses, both 4- and 5-year-olds, are allowed to walk in the water before their jumping round begins.  It’s a freebie school, so take it. You don’t earn bonus points for going in “cold.” Build your horse’s confidence and parade through the water first, then start your course.

6.  Show off your horse’s gallop as much as possible. Show a clear difference between your show jumping canter and your cross-country gallop; after the last show jumping fence, pick up the pace. Don’t show jump your cross-country fences, even if they’re small! There is a score for both gallop between fences and again for the final gallop at the end. Don’t be afraid to put your hands down and let the horse move on to finish out. Some horses go better galloping lower into the rider’s hands; consider practicing this if your horse needs it.

7.  Don’t forget the rideability score (x2!). If you do show off your gallop between fences, make sure your horse comes back smoothly and balanced for the jumps. Jumping out of stride is important. Try to ride tactfully and help your horse as much as possible; a handsy ride is distracting, causes tension and leaves questions in the judge’s mind.

8. Remember that the judge’s scores are just an opinion of what he or she sees that day. Your horse may have a fantastic walk, but tension prevented him from showing even one good step. While the judge knows your horse can do better, she can’t score you much higher than what the horse honestly showed for that movement’s performance.  The judge should, however, leave a helpful comment noting your horse’s potential and supporting her score.  (Comments are perhaps more important than the number itself!)

Not every horse will be developmentally ready for the YEH program at certain ages, and that’s okay; it doesn’t mean he isn’t a quality horse, or won’t make it to the upper levels. Some horses mature more slowly, and riders should not rush them into performance when they aren’t ready. The good news is that the YEH is intended to build throughout the year; judges understand that a 4-year-old in April is just learning to jump, and while “the rules” state that the 4-year-old class standard is Novice-sized, YEH competitions early in the year should be a level lower. In fact, it’s okay for the course to start with a cross-rail. Later in the season, more can be asked of the horses, as their training is expected to progress.

I would like to thank Marilyn Payne, Susan Graham-White, Maren Engelhardt and Robin Walker for sharing their expertise over the last two days. It was very insightful to hear their personal thoughts on young horses, development and what makes an animal truly exceptional. The success of the seminar was bolstered by the wonderful horses made available for demonstration and by the creative, thoughtful discussion among fellow participants. It was an awesome group of minds to hang out with for two days!  Thanks also to Jackie Mars for her support of the seminar and to Longwood for hosting. I am greatly encouraged by the USEA’s FEH and YEH programs and look forward to attending these events in the future. I strongly urge any event rider, breeder or judge to mark your calendar next time this seminar is scheduled in your area!