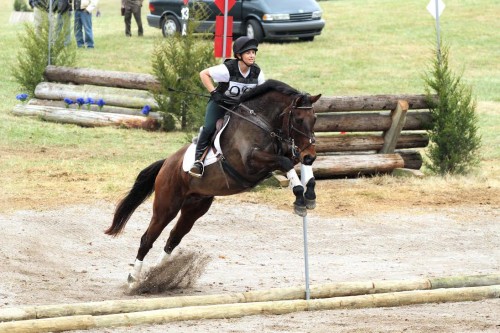 Esprit boing-ing through the coffin at River Glen. Image courtesy of WNC Photo.

It’s a running joke at events that at some point during the weekend, usually after a competitor’s party beverage or two, I will inevitably descend into an “I love you, man” style monologue about our sport. Sometimes I just blubber on enthusiastically to anyone who will listen; sometimes I get deep and serious, even a little teary eyed if I’m really on a roll.

This past weekend at River Glen H.T., the moment arrived unexpectedly while I was tearing open bags of shavings. I hadn’t been to an event in a month and a half, so I guess I was feeling emotional. There’s something therapeutic about the ritual of arriving at a show and readying your stall: banking the shavings, hanging water buckets, organizing all your stuff. Everything in its right place. Life is weird and hard and confusing, but at least I know where my spurs are. “I love eventing!” I enthused loudly to no one in particular. A friend’s voice from the next stall down: “A little early for that, isn’t it?”

Eventing has been the one constant in my life for as long as I can remember. My best childhood memories are of going to events with my sisters. As it goes with any long-term relationship, things gradually got more serious. Jumps grew bigger and goals loftier. I did the horse thing full-time for a while in my 20s, but to be honest, it sort of killed my buzz. If eventing was my job, it couldn’t also be my escape. These days, I feel like I’ve finally hit my stride, writing about horses for a living and racing to the barn every day after work.

Unfortunately, when you look around at an event, you’re almost always going to spot someone who doesn’t look happy to be there. Maybe it’s a burnt-out professional who has seven horses to compete but would rather be curled up in the truck, reading a book. Maybe it’s someone who keeps eventing because that’s what they’ve done their entire life, and they don’t know who they would be without it. Maybe it’s someone who has so much pressure on them it’s not fun anymore, or someone who’s in just a little over their head. I see these people and I recognize them, because I’ve cuddled up to those demons myself.

What’s your place in the sport? It’s a question you have to keep asking yourself over and over again, and it’s OK if the answer changes over time or isn’t what you think it’s supposed to be. For me, my relationship with eventing is constantly shape-shifting, but at its core, it always has been and always will be the same. Eventing is my home, a safe space in which to steady myself amidst the chaos of daily existence. In the grand scheme of things, eventing is easy: You jump one jump, and then you jump the next jump, and then you jump the jump after that. There’s a life lesson in there somewhere.

I think we make eventing too complicated sometimes, piling all of this drama on top of it, allowing our egos to get in the way. We fuss about ribbons and rankings and reputations. We fret about getting to the next level or qualifying for X event. Those things may be important, but losing sleep over them isn’t going to make us more successful. Focusing our energy on becoming better riders makes us more successful. My advice: Keep it simple. Go back to the place where you first fell in love with the sport. Rekindle that romance. Remember that you’re already exactly where you’re supposed to be. The rest is just details.